This has been made possible through the development of techniques and equipment which enable audio information to be converted into a digital format, and transferred by optical means onto a disc.
To achieve this breakthrough, Philips has used what is possibly today's most advanced tool...the laser...both in the Compact Disc Player itself and also in the mastering process. In addition, our extensive experience in audio technology, plus Philips worldwide research and development facilities have been combined to realise our aim for the optimum in sound reproduction... 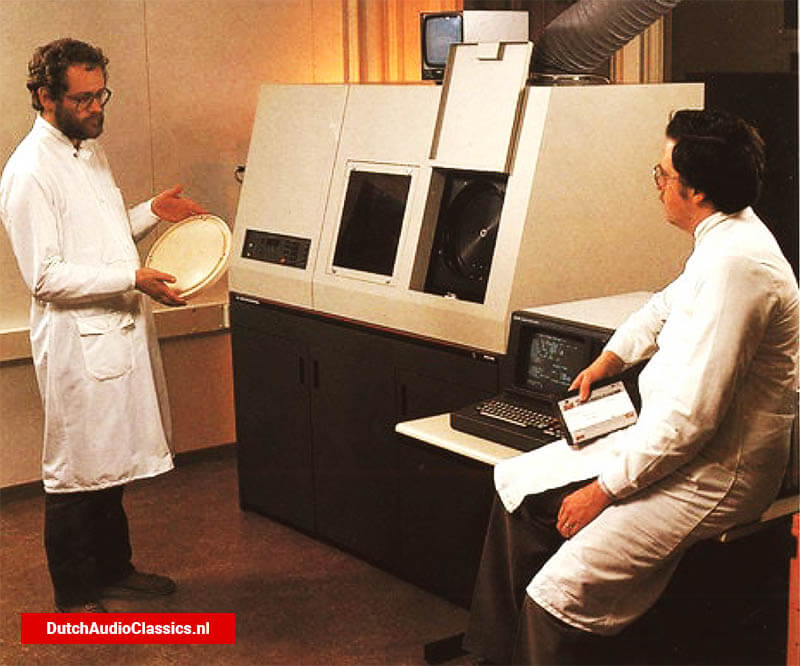 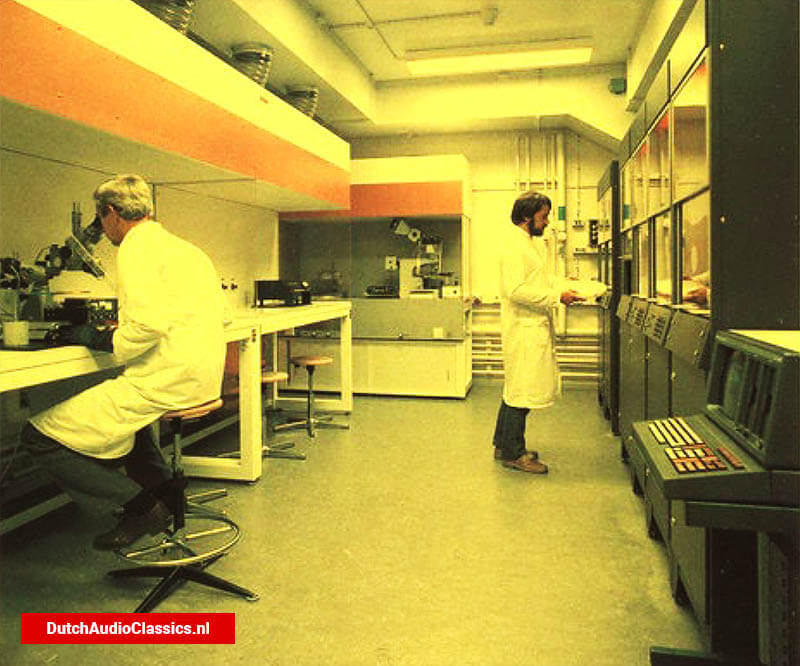 The system comprises a single-sided, mirror-finish disc which allows up to one hour's continuous play, and a player with a built-in laser which scans the information within the disc. As this information is contained beliw the disc's surface, it is unaffected by dust or handling. In addition, because the laser of the Player scans the information, rather than making direct contact with the disc as in traditional reproduction systems, its life is virtuallu indefinite.

The process required to produce CD-discs can be broken down into four distinct stages:

The original sound is recorded, mixed and transcribed, to arrive at the Master Tape. This is ideally in digital format (although analoque is acceptable), and contains both stereo audio channels. 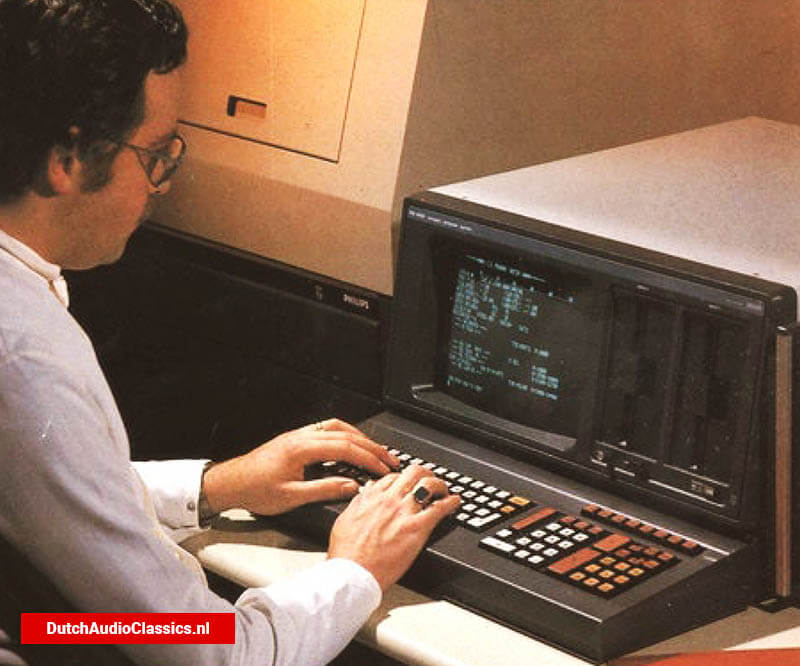 The Master Tape is converted -analoque to digital, or if necessary digital to digital- and subcode information is generated and recorded. This can take the form of cue codes. The result is the Tape Master, which fulfills all necessary parameters for subsequent recording onto the disc, and acts as the standardised carrier fo the CD-Digital Audio information. 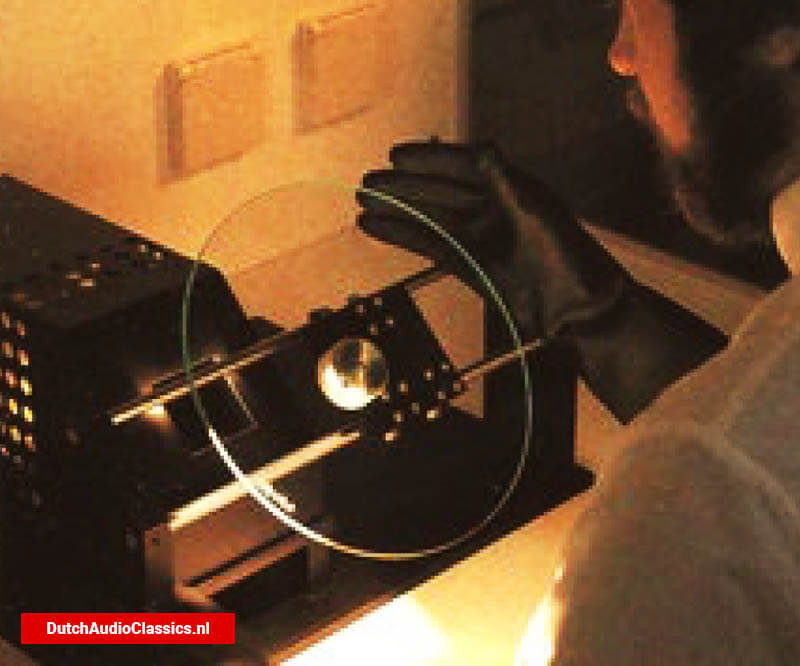 In this process, the information from the Tape Master is encoded into the CD-standardised format and recorded optically onto the surface of a glass disc which is coated with photoresist.

Following development and evaporation, the result of this process is the Disc Master, which carries all the CD-standardised information in millions of minute pits. To a large extent, this surface structure determines the basic parameters of the CD discs. It is also designed to ensure subsequent successful mass replication. 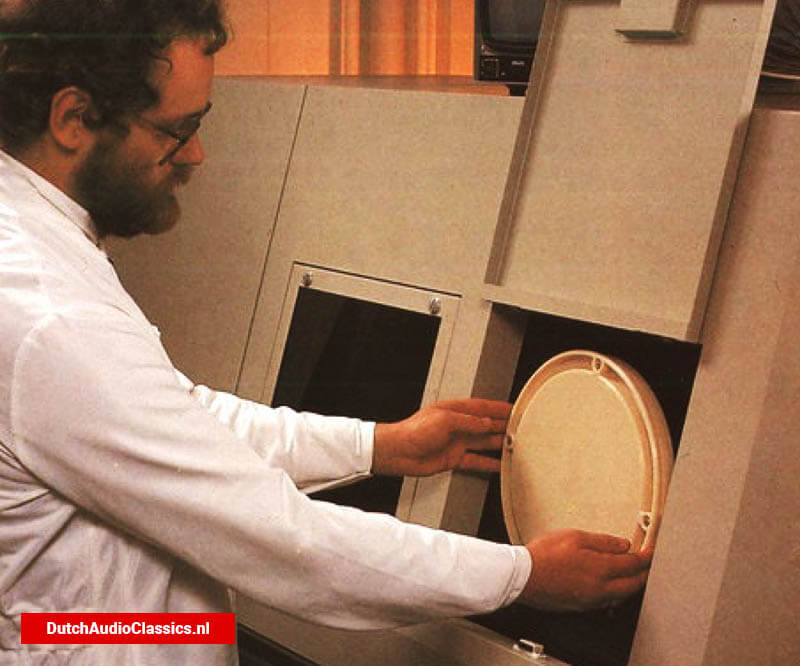 By galvanic processing, the Disc Master surface is transferred onto a nickel shell (or "fatger"). By the same process, from the "father" negative a number of positives (or "mothers") can be produced. From each "mother", "sons" or stampers are made, which, after suitable processing, are used for replication. By compression, or injection moulding, the information contained on the surface of the stamper is transferred to a transparent plastic carrier. This receives a reflective aluminium coating, over which a protective layer of lacquer is applied. Following accurate punching out of the centre holes, the discs are labelled and packaged to provide the finished Compact Disc.

The technique of Disc Mastering has been developed by Philips, and enables the recording of digital audio and subcode information from the Tape Master, onto a disc's surface. On this Disc Master, the information is contained in an ever increasing spiral of "pits". 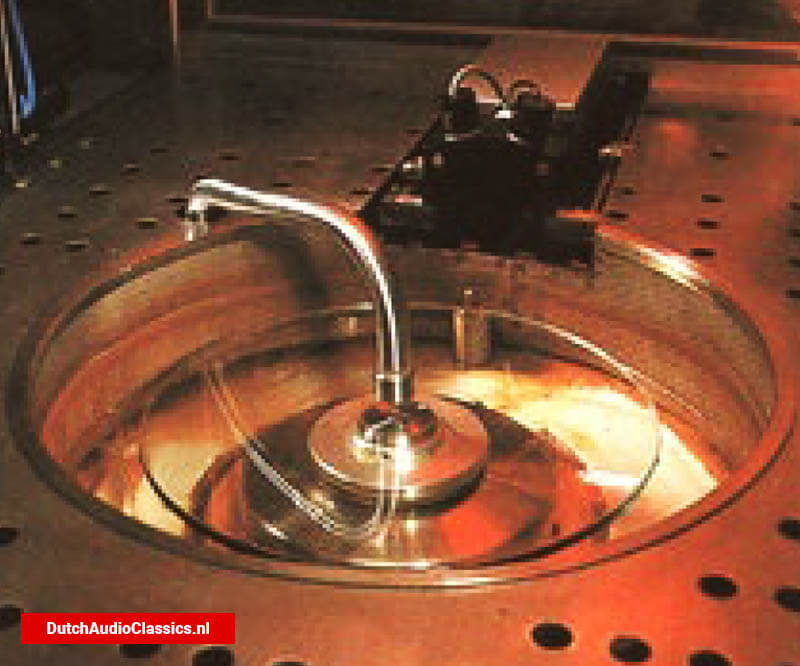 The glass substrate is placed in the first process stage by means of an automatic exchange mechanism. In this stage, it is first scrupulously washed with de-mineralised water, and then spin dried. In the second stage, an adhesive layer is applied prior to the disc receiving a coating of photoresist. The final stage in the Resist Master Preparation System is checking the uniformity of the photo resist coating by an automatic scanner linked to the computer. The Resist Master Disc is then placed in a special protective carrying cartridge, cured in an oven and held in store until it's required for recording. 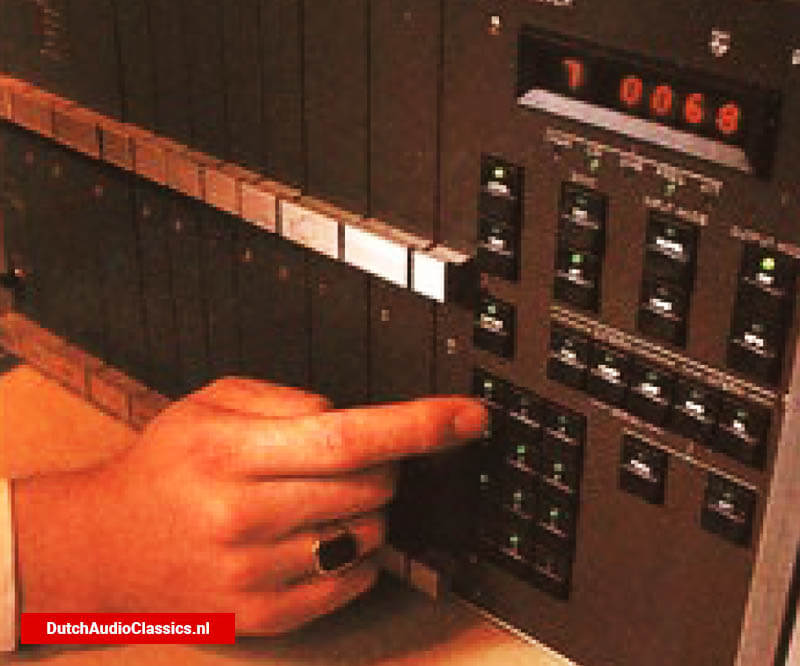 The Master Recording System comprises a laser beam recorder, encoder, subcode processor, digital tape recorder, and a system controller. The latter is a computer ehich is programmed to automatically monitor and control all stages in the recording process.

In its cartridge, te Resist Master Disc is introduced into the disc carrying mechnisme of the laser beam recorder. The top of the cartridge is automatically removed and the disc passes onto the recorder's drive spindle. The laser beam recorder has its own built-in dust filtering system, and all operations take place in a climatically controlled clean air environment.

The Tape Master is placed on the digital tape recorder, and recording can commence. The digital audio and subcode information is fed into the encoder - subcode information from the original tape, being converted into subcode by the subcode processor. The encoder carries out multiplexing, CIRC encoding, and EFM modulation. For testing and quality control applications, the encoder can also generate test signals.

The data bit stream from the encoder passes to the acousto-optical modulator which lies in the light path of the laser in the laser beam recorder. This laser beam is modulated, according to the data bit stream, and focussed by means of an objective lens system onto the sensitive coating of the Resist Master Disc. A servo-controlled motor, which has air-bearings, rotates the disc, and the projected information is recorded onto it in an ever increasing spiral by the radially tracking objective lens system. Focussing of the objective lens onto the disc is assured by a servo system. This comprises a separate laserdiode, and a secondary system which uses part of the reflected light from the recorded spot to enable fine tuning. The accuracy of this operation can be confirmed on the focus monitor of the system. 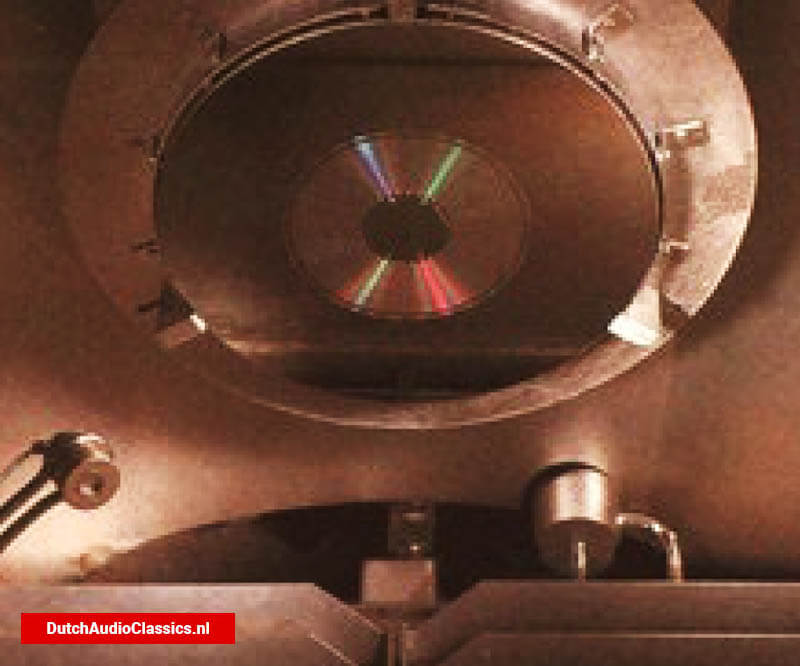 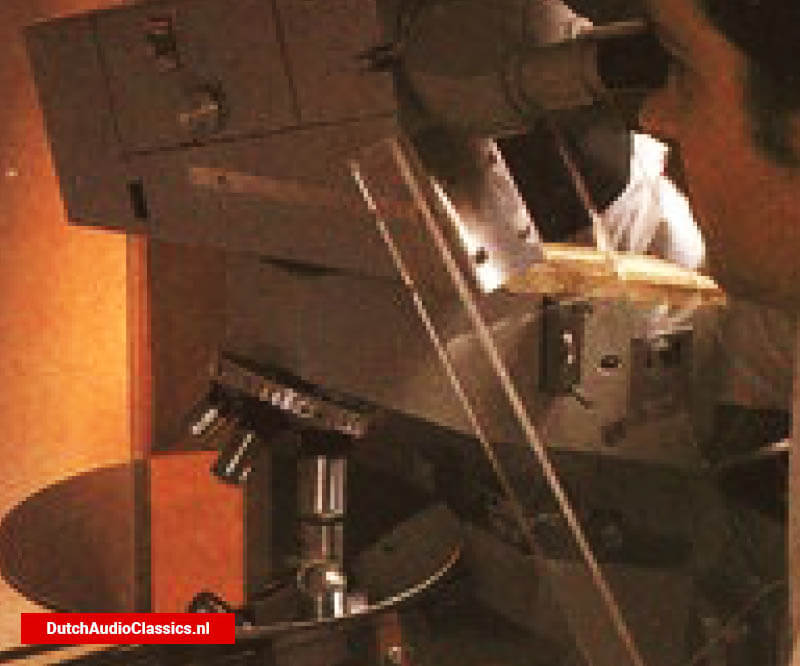 At the end of recording, the disc is automatically returned to its cartridge and passes to the developing stage. The disc is then removed from the cartridge, and develop using fluids which selectively etch away the exposed areas. Light from a laser beam, projected through the disc, is diffracted by the developing pits. This process is continuously monitored untill the desired pit geometry is achieved, and the operation stops automatically. The disc is then cleaned and spin dried.

The quality of the Disc Master is dependent upon the accuracy of its pit geomerty. The pit length is determined by the data bit stream from the encoder, to the optical modulator. Pit depth, width, and slopes are carefully chosen to enable the optimum high frequency signal, radial tracking signal, minimum sensitivity to unwanted process parameters, and not least, a geometry which will later permit mass replication. The track pitch - or distance between tracks - is specified as 1,6 +/- 0,1 microns. To maintain this, accuracy and stability of both the radial tracking mechanism and rotational system within the laser beam recorder, are essential.

Following succesful developing, the disc passes through an evaporation stage where it receives a microthin coating of silver. This enables electrical inspection and subsequent galvanic processing. With the Master Player System, pit geometry can be measured using signals from the optical readout system. The readout signals can be relayed to a Silent Room for audio assessment.

A similar system is optionally available for inspection and measurement on stampers and finished Compact Discs as well as Disc Masters. In this latter application, it is known as the Universal Inspection Player System. Final inspection is carried out with a stereo microscope to confrim surface quality of the CD-Disc Master.

Philips has designed the Disc Mastering process to minimise manual contact once the plain glass disc has been introduced into the Resist Master Preparation System. Throughout the complete Disc Mastering process, the disc remains in a conditioned clean air enviroment, moving from one process stage to another in an airtight cartridge, from which the disc is automatically withdrawn, and to which it returns, after each operation. 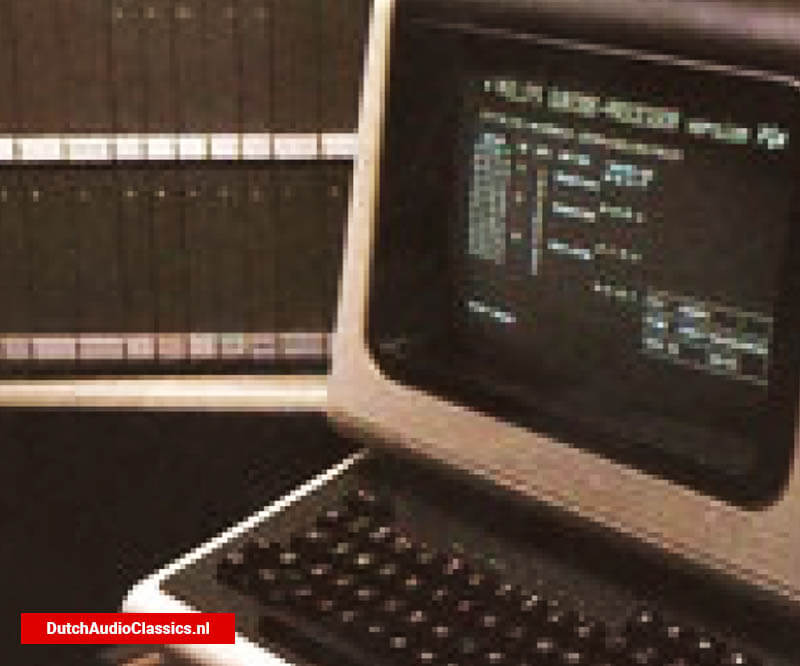 4. Setting up a Mastering facility

the setting up of a commercially effective mastering facility is an investment requiring a lot of experienced advice and assistance. Philips can provide it. Through out background in optical disc mastering, we have developed equipment and techniques that simplify complex procedures, and provide a cost effective solution to customer requirements. We can offer advice on the type and scope of equipment needed, the sort of accommodation it requires, and alos personnel. Through our experience we also know for which equipment, and in which areas, flexibility should be built-in for expansion. And of course, at Philips we alos carry out installation, commissioning, maintenance, and even staff trainig.

Our belief in the future of Compact Disc Digital Audio is such that in collaboration with the audio industry itself, we are working towards the setting up of world standards. Not only for the Compact Disc itself, but also for the production of CD-Tape Masters, CD-Plain Glass Discs, and CD-Disc Masters. 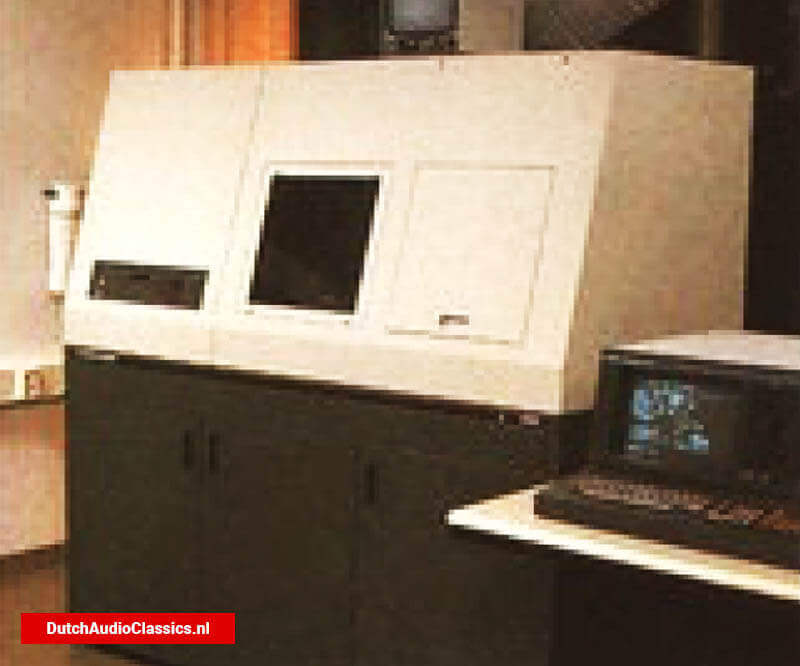 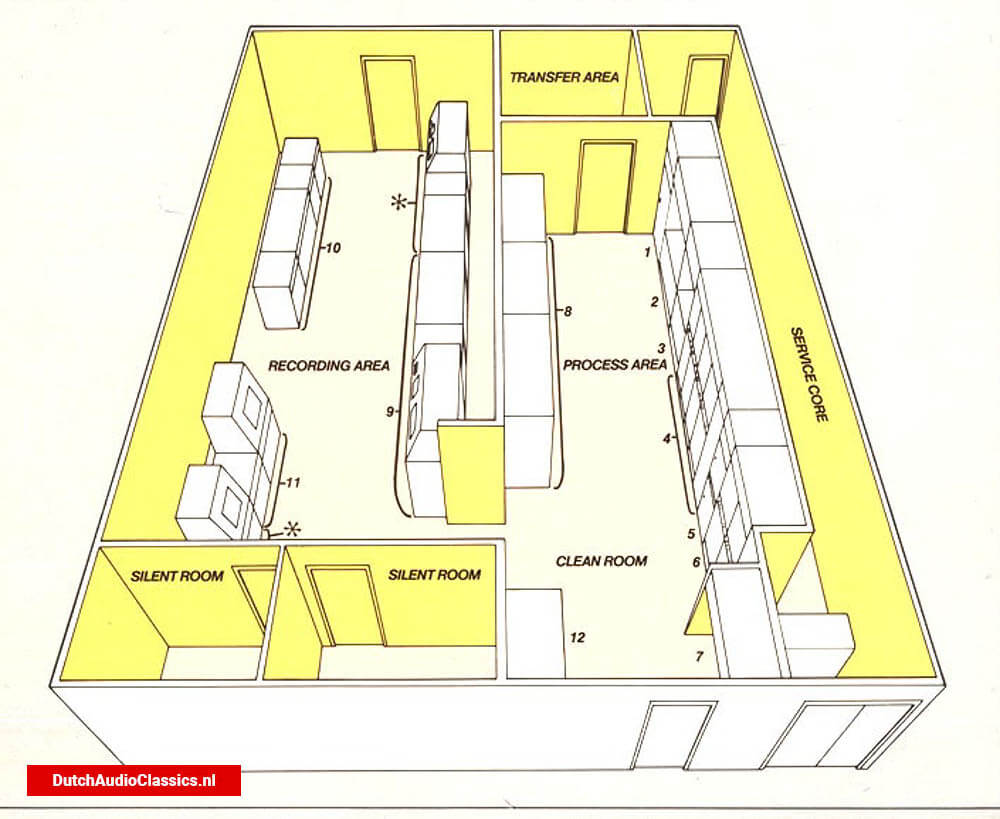