Back to the index
Related:
"Philips realized the dream of all the CD fans with the professional CD player of the future."

CD fans dream of it, professionals sake him: the perfect CD player.

This Top player looks like a medium-sized computer system and has as much together with a conventional player as a Porsche 956 with a Golf GTI. CD innovator Philips has developed and built this perfect CD player. Her name is correct 'LHH 0502 Professional Compact discs Reproduction System' and is a professional CD-Equipment designed for radio stations. Therefore a Prototype of LHH 0502 went on a trip around the world to visit radio studios.

The super-Philips CD player can do things that no other player can.
It consists of a total of five components: a central control unit, a keyboard, a monitor and two CD players. The heart of the plant is the "CD-Drive Control System", an inconspicuous, dark grey cabinet, which hides intelligent computer-electronics. Special hand-built ribbon cable connects the central control unit with two equally CD players.

At first glance it recognizes as the Philips CD-player-300, father of a whole family of CD-Players. Among other things, also the Marantz CD-73. He lost all function keys except for buttons for opening and closing the drawer. These buttons are not necessary, however, because the central control unit rules over all the functions and is the important component.

With a ultraflat elegant keyboard, two identical keyboards - one for each player - give the Compact Disc Jockey the players of the future commands that no conventional player can do. A numeric keypad and a dial complete the keyboard.

Communication with the man at the keyboard over a video monitor. On him appear all commands and their confirmation, this time and track ads for both players and a whole series of additional data, the normal CD player conceal.

When switchin on the CD player, the screen flickers with several display areas for each player. Three displays show the number, duration and the time remaining balance of the current title. As long as the signal "Insert disc" prompts these three fields remain empty. When given the command, the computer behaves like many players at home: track and time information in the appropriate fields light up. 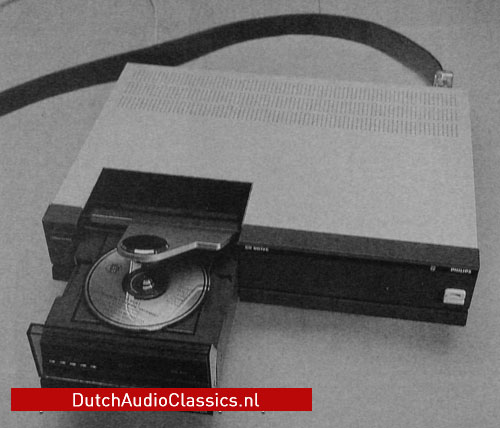 What he manages more than an ordinary player, will show when pressing on the two function keys on the keyboard. In the two lower segments of the screen, he served both players separately for a function desire menu, which offers several additional ads: for example, the total playing time of the CD or the catalogue numbers of the inserted cd's. It can also show a list with all the title numbers and their total play time.

The menu is presented by horizontal fields lying side by side. A small arrow helps to direct to the desired function. Together with pressing on the "Enter" button, the menu disappears and the total elapsed time of a CD or catalogue number flickers on the title list.

If you have selected on the two CDs a piece of music that you liked to play, it shows the title number on the "track" button on the professional keyboard, and then operated the "Enter" key - in less than two seconds, the screen confirmed for both players: Title found.

Now, the professional sound engineer - provided that the player is connected to a mixer, each with a slider for both CD player connected - the two tracks to listen trial. The player stops and with the grip knob jump to the man at the keyboard quickly or slowly to the CD from pit lane to pit lane. The laser beam to jump in tiny steps, similar to the one hanging needle on a analog turntable in the same track and read back on this track accommodated musical sequence repeatedly. Now turning to search as long as the regulator, until you found the right track. The "Dail" display on the screen with minutes, seconds and called Frams (1 / 75 second, equal to 13.3 milliseconds), in the time code each CD is divided, in addition to providing Mithormoglichkeit assistance. In this way it lets each individual stroke or sound exactly the same direction. 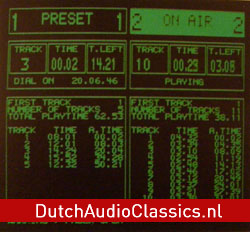 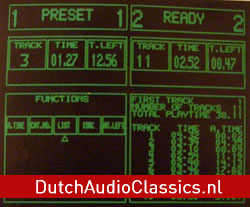 The second way to find a specific spot on the CD, let's deal with the time programming. First example: The radio Dicjokey wants to play song number seven after one minute and 12 seconds. First he chooses with the "Track" function the seventh title. Then he prints briefly on the "time" button and types "1", "comma", "1" and "2". Then he acknowledges the input with the "Enter" button and the system is programmed.

Second example: Up to the news still remain exactly two minutes and 37 seconds before the gong to the last sound of a title fade. Now, the jockey chooses, the "Left Time" mode (Time) and type "2", "comma", "3" and "7"; rejoined the "Enter" key printed, and now the system is exactly the last two minutes 37 seconds of the title over the transmitter.

During a stucco runs, prepares the CD-jockey in the same way the music started on the second player. In the crucial moment, he slider number one and number two back up and thus has the perfect transition between two Musikstucken. Such possibilities wish to CD Freaks furs living room - beilspielsweise the perfect music from CD to tape to transfer.

The price of the CD-dreamplayer will be at least 30,000 dollar. Furthermore, the father of the system, "Optical Disc Mastering Group" in the Philips headquarters in Holland Eindhoven, has other plans. The goals for Leo M. Greep, product manager of this department, are: "The LHH 0502 serves as a testing model for future professional systems. We want to gain experience, then introduce it into such units".

In the autumn of this year (1984), the new generation of professional equipment will be presented: The mutated cdplayer of the LHH 0502 will be delivered to broadcasters. But Philips has more plans. Special versions for disco clubs will follow.

The Philips LHH in Detail

Connection:
Video monitor, printer for listing all played CD title (for the radio to GEMA payroll important), mixer with a pulse encoder for automatic starting players.