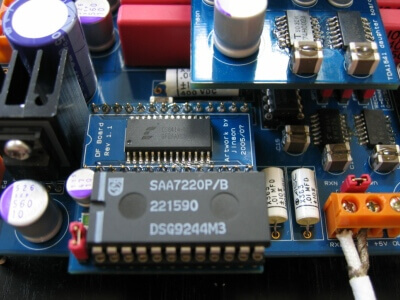 The SAA7220P/A was originally designed for digital audio applications using a sampling rate frequency of 44.1kHz (Â±10%). It can also be used for 32kHz(Â±10%) and 48kHz(no tolerance) applications suc as DAT.

The SAA7220P/B is an improved version of the 'A' device giving 1dB better performance in the passband of the FIR filter, achieved by using different ROM coefficients. The other difference between the two types is that the offset in the accumulator is greatly reduced (+0.05% in the 'B' compared to +5% in the 'A'). The SAA7220P/A required a +5% offset to give optimum performance when used with the TDA1541 dual DAC. However, with the 'B' version this offset is no longer necessary for optimum performance.

Post filtering
The 'A' and the 'B' versions of the SAA7220 are designed to be used with a third order Thomson-Butterworth or Bessel post filter as the passband has roll-off compensation for this. For 'C' version a 4th order elliptical filter is recommended in order to give a flatter overall response.