In recent years, most audio components have benefited, at least to some degree, from the use of digital circuitry. No truly digital speaker has yet been created, however, nor does that appear to be an imminent possibility. Ultimately, the sound has to be created by a moving physical surface, essentially analog in nature. This is as true of the Philips DSS930, which is part of what the manufacturer calls a digital speaker system, as of any other speaker. But the DSS930 is designed to be operated through the DSC950 Digital System Controller, making the system as close to truly digital as seems to be currently feasible. The DSC950 is essentially a digital preamplifier (providing digital output) designed to handle a number of input sources, both analog and digital. These include phono (moving -coil and moving -magnet), CD, tuner, TV, and VCR, plus input and output connections for two audio tape decks. Digital connections are also provided for four program sources and a digital signal processor (DSP) accessory.

Externally, the DSC950 resembles a conventional preamplifier. A display window shows its operating status, and large knobs select the input source and adjust the volume level. Two small knobs operate the bass and treble tone controls, and pushbuttons control other operating features. The DSC950 also has a front -panel headphone jack with its own volume knob. A wireless remote operates all the key control functions. 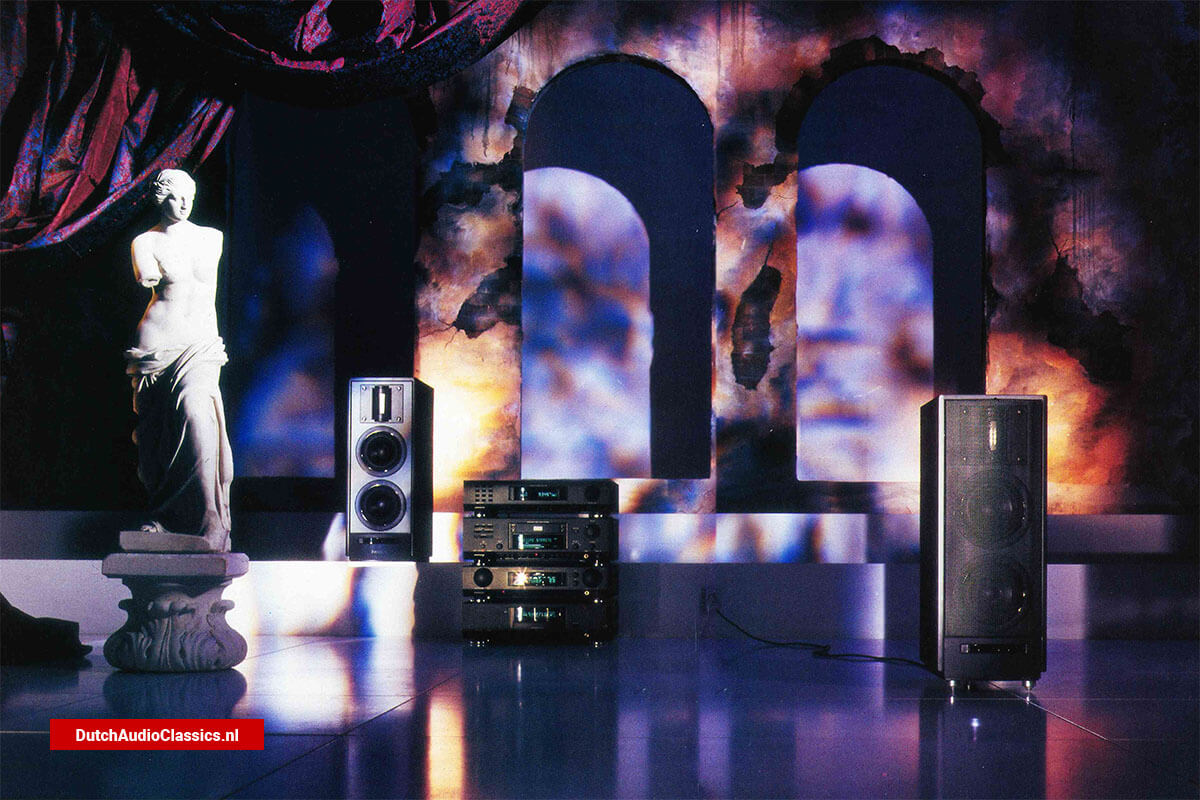 The Philips DSS930 speaker is a compact two-way powered system designed for upright stand mounting. Its two 5'/4 -inch polypropylene -cone woofers operate in a sealed enclosure. They cross over at 4 kHz to a Philips Isophase tweeter, somewhat similar in concept to a small planar driver with a curved radiating surface and designed to give wide horizontal dispersion. The woofers are driven by an internal 80 -watt amplifier, the tweeter by a separate 20 -watt amplifier. The speaker is designed to be permanently plugged into a powered AC outlet, remaining in a standby condition until a signal appears at its input. Red and green pilot lights on the front of the cabinet show its operating status.

The internal 36 -dB -per -octave crossover between the bass and treble drivers is achieved by digital filters within the speaker system. Philips says this approach enables near -perfect phase relationships between the drivers in the crossover region and correction of certain driver nonlinearities.

The DSC950 control unit connects to the DSS930 speaker through a single thin cable, with standard phono plugs on both ends, that carries digital audio and control signals for both channels. Each speaker contains separate Philips Bitstream single -bit digital -to -analog (D/A) converters for its bass and treble drivers. The DSC950 can operate as many as three separate pairs of speakers in different locations (cable lengths up to 60 feet can be used to daisy -chain one pair of speakers to another). Switches on the back of each speaker cabinet determine whether it is in group A, B, or C and whether it carries the left- or right -channel program. A small wireless remote control furnished with each pair of speakers can be used to operate the system by pointing it at one of the speakers; it can turn any of the pairs (or the entire system) on or off, vary the speaker volume, or temporarily reduce their volume by 24 dB. The DSS930 will operate with sampling rates of 32, 44.1 (the CD standard), and 48 kHz.

As recommended, we mounted he speakers several feet from a room wall on stands that placed their tweeters at a listener's ear level. The averaged room response of the two speakers was flat within ±2.5 dB from 700 Hz to 5 kHz and, about 3 dB lower in level, within ± 1.5 dB from 5 to 20 kHz. Our close-miked woofer response curve spliced easily to the room curve with almost a two -octave overlap, yielding a composite response with a slightly elevated output between 400 and 70 Hz and an 18 -dB -per -octave drop from 70 to 20 Hz.

The curve's shape suggested that the sound should have been slightly warm because of the 2 or 3 dB of elevation in the lower midrange and upper bass. Although we sometimes heard such an effect, most of the time the speaker sounded flatter than it measured. Indeed, our first reaction was that it sounded very neutral. Not only was the overall response smooth and balanced, but there was also a striking absence of the artificial heaviness that frequently mars the voices of male radio announcers. 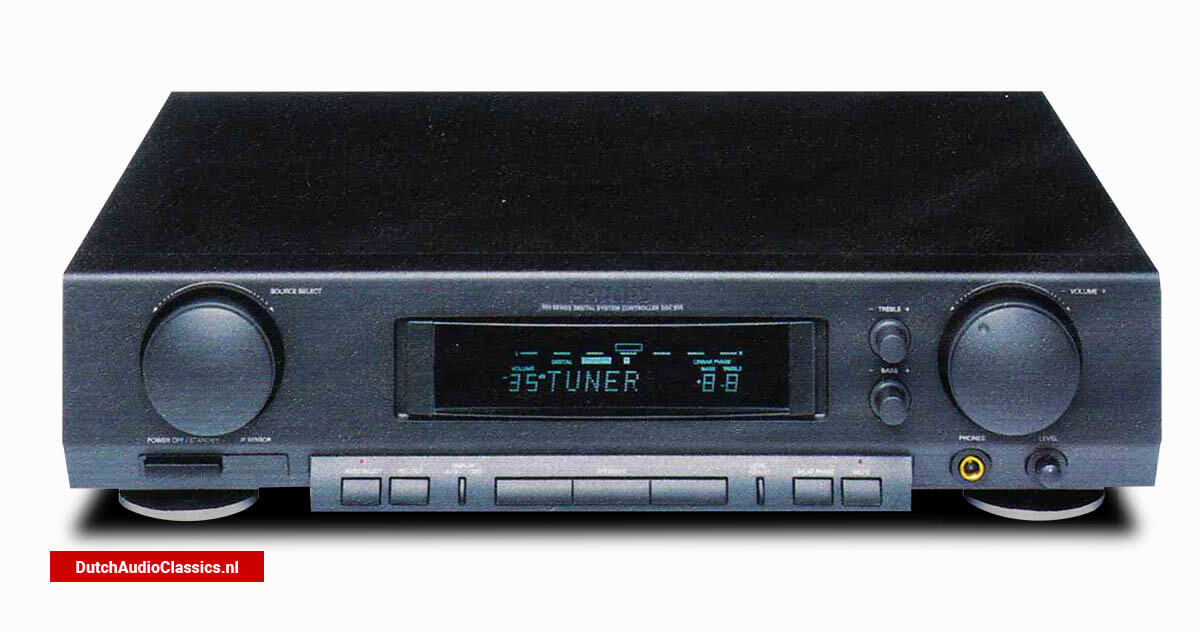 Perhaps the two small woofers simply did not go down low enough to produce this effect? A few organ -music and test CD's put that speculation to rest: The DSS930 can put out a clean, strong 40 Hz and, at a slightly lower level, a relatively undistorted 31.5 Hz. Its bass range and output capabilities far exceed those of most speakers its size. As for the rest of the audio spectrum, it sounded as smooth and uncolored as one could wish.

The DSC950 has a Compensation button that is said to linearize the speaker's amplitude and phase response. We noted an increase in bass output when the circuit was activated, and measurements showed an increased output below I kHz, amounting to 5 dB at 100 Hz and 12 dB at 40 Hz. It makes a substantial improvement in the lowest octaves, and it can easily be switched off if desired.

Quasi-anechoic MLS measurements generally confirmed our room - response curves. The response shelf, with the output above 5 kHz perhaps 3 to 4 dB lower than below that frequency, was evident in every measurement. We were surprised, however, to find a deep notch at the 4 -kHz crossover frequency, amounting to a nearly complete cancellation of the output (the notch was typically 20 dB deep, but very narrow so that it was not audible in program material). This measurement also showed a sharp jog in the system's phase response at that frequency, with nearly constant phase above it.

The dispersion of the Isophase tweeter was excellent. At a 45 -degree angle to the forward axis, the reduction in output was less than 2 dB up to 6 kHz, 3 dB at 10 kHz, and only 6 dB at 20 kHz.

With the 100 -Hz output set at 90 dB sound -pressure level (SPL) at 1 meter, distortion was well under I percent above 200 Hz but increased rapidly at lower frequencies to 10 percent at 90 Hz. At 80 dB SPL (a more reasonable level for drivers of this size), the distortion was only 2 percent at 100 Hz and 8 percent at 40 Hz. 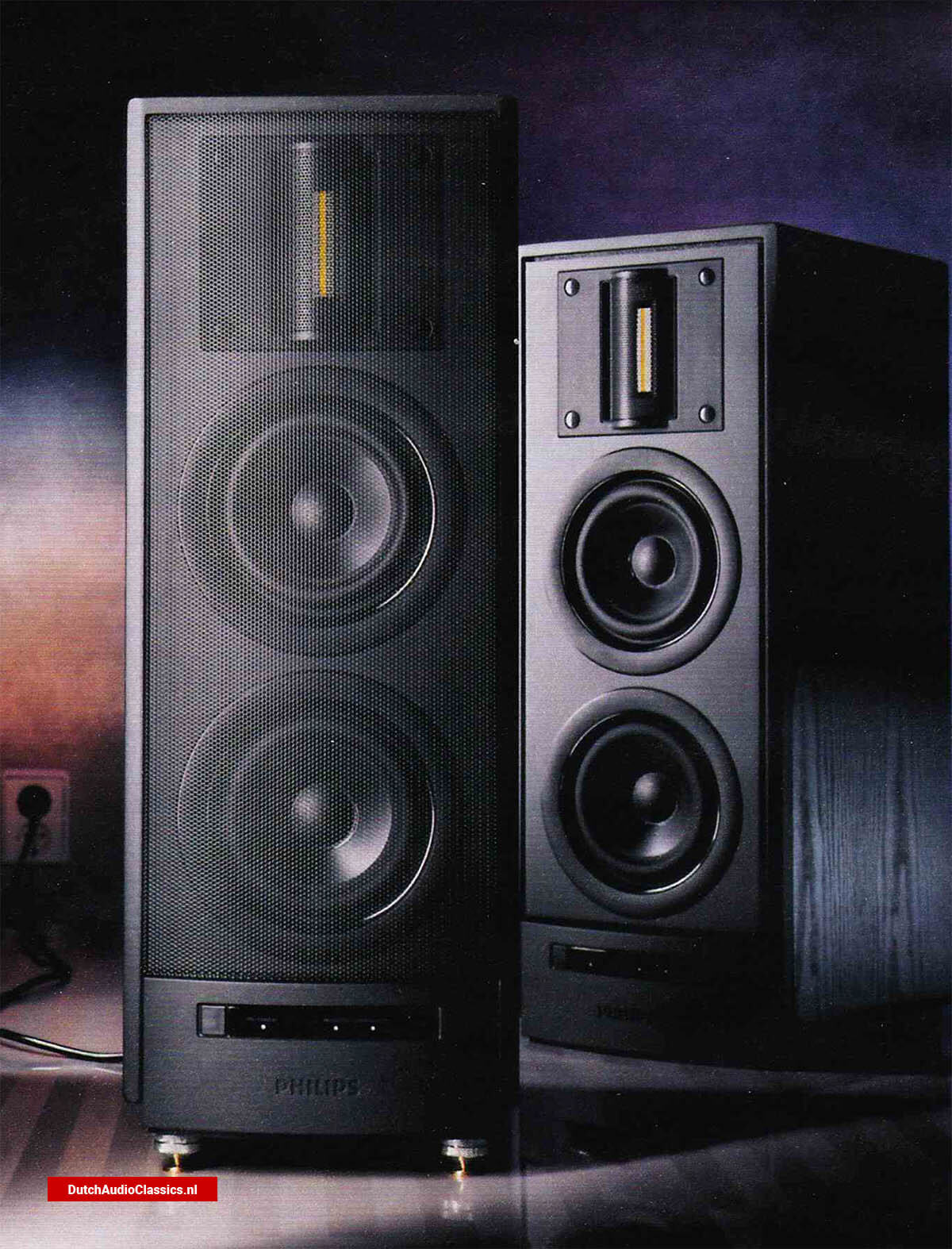 It is difficult to describe the sound of a speaker that has relatively few sonic peculiarities. Compared with most speakers we have heard in the same room, the Philips DSS930 was almost antiseptic, with hardly any obvious colorations. It was not shrill or overbearing at the top end, and it was certainly not tubby or bass -heavy. It didn't "honk" or impart harshness to the sound. It was especially realistic when reproducing the human voice, either male or female. But if you really want to know what makes this speaker special, the best thing to do is listen to it yourself. A few minutes' listening is worth thousands of words!

The sound is only part of the picture, however. The Philips DSC950/DSS930 combination is a thoroughly integrated music system, probably the easiest to install that I have ever encountered (barring one-piece designs). There is a minimum of wiring and little opportunity to go astray (it is not possible to connect a speaker out of phase, for example). It can serve as the nucleus of a fine multiroom system, with access to most control functions from any room. The DSC950 itself is perhaps the most user-friendly control center one could wish for, with a minimum of arcane nomenclature and a clear display panel (the instruction manuals for both components are excellent, by the way). I could go on, but it should be evident that this is a thoroughly thought-out system, well worth its price.

True, that price is considerable, but hardly astronomical by today's standards. Is the system right for you? That is your decision, not mine, although I can tell you who shouldn't buy it. It can play loud enough to preclude conversation in the same room, but it cannot be expected to match the levels of 100+ dB that are preferred by some. It is at its best reproducing instrumental music (not sound effects or what passes for music in some circles, although for all I know it might make a pretty good, if pricy, part of a home theater system). If you are a deep -bass aficionado, you'll want a subwoofer, and that won't be easy to add to this system, at least for the present.

These Philips components form the most affordable digital reproducing system I know of. There will be others, eventually, and in time their prices should become more competitive with those of conventional analog systems. For now, I like what I see (and hear) in these products.