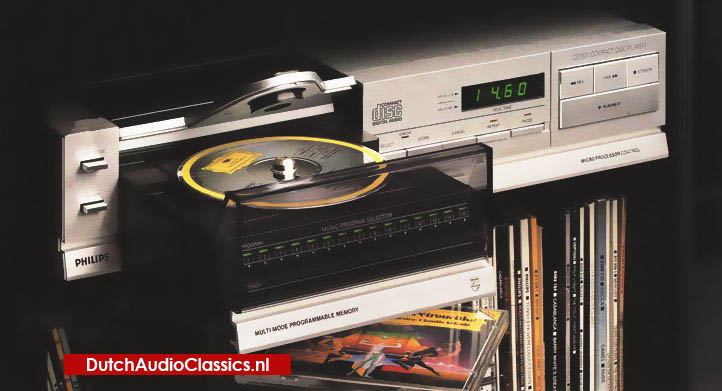 As inventors of the Compact Disc forma Philips were naturally the first in the field with CD players though an avalanche of designs from the Far East followed very quickly afterwards. We reviewed the Philips CD100 in our March 1983 issue and this still continues as the 'baby' of the Philips range of three models—with a price reduction to £399. The CD303 reviewed here is the largest Philips machine and is somewhat modified from the CD300 design originally launched, the main change being the addition of a visual display in real time (minutes and seconds) of the elapsed time of the individual track in play—or, on pressing a switch alongside the display. from the start of the disc.

The CD303 is a front-loading machine, a touch on the Open/Close button causing the disc drawer to slide forward, while the disc pressure plate rises up to reveal the disc platform. Tapping the Open/ Close button again causes the drawer to glide back ready to play. Pressing the Play/Next key will set the disc spinning and, when it has read the 'Table of Contents' data, cause the machine to display the total number of tracks on the disc (by illuminating the appropriate number of LEDs in a row of 15) and start playing from the beginning. Further taps on this Piay/Next key at any time will make the scanning laser skip to play from the beginning of the next track.

If, after loading a disc, it is desired to play from some other track than Track 1, there is a 'Select' button which can be tapped the necessary number of times to move the laser along to the desired track (as indicated by flashing of the LED selected). Then the Play/Next key can be used to start playing. This 'Go-to' mode can also be used at any time during play to skip or return to any desired track. Pressing the Repeat key during play will light a 'Repeat' LED and give continuous repeat playings until cancelled by tapping the Repeat, Stop or Open/Close key.

Reverse and Forward keys give fast search through the disc, aided by watching the real time display. Speedier location of a desired passage may be obtained by first using the `Go-to' mode to locate the right track and then the Forward and Reverse keys. The Pause key is self-explanatory, and there is also a useful programming facility for up to 15 track entries to be played in any chosen sequence. This uses Select and Store keys, the former to identify each required track number, the latter to enter that number into the memory. Each time a track is stored, its LED is illuminated, so that the selected programme is progressively displayed. As an alternative to this 'Add-in' programming procedure, it is possible to combine the Store function with taps on a. 'Cancel' key and arrive at a chosen sequence by deleting undesired tracks in a 'Take-out' procedure. The machine will play discs having more than 15 tracks, but cannot be programmed to select the higher-numbered tracks.

Like all Philips CD players, the CD303 comes handsomely packaged with a folder containing a sampler disc having 15 pop and classical tracks, a cleaning cloth, leaflets on how digital audio works, a catalogue of CD discs, a comprehensive user's manual and an application form to join the Philips Compact Disc Club (to receive regular mailing of new titles, etc.). The audio output is via a captive twin lead ending in left/right marked phono plugs.

Performance
Like any new purchaser, I carefully removed the two safety transit screws and stored them in the slots thoughtfully provided in the user's folder, then connected the mains lead and plugged the phono-plugs into 'Auxiliary' on my hi-fl equipment. The next obvious thing to do was play the Sampler disc-and I was delighted to find that this was a new compilation rather than the earlier Philips Sampler (which I now know almost by heart). As I learned to use the track skip and programming features, I was soon in no doubt that the quality of reproduction from this Philips player was every bit as good as their excellent little CD 100. The well-chosen sampler ranges from Elton John to Joan Sutherland and Luciano Pavarotti, from Dire Straits to the English Concert and the Academy of St Martin in the Fields-with a better consistency of tonal fidelity than in the earlier sampler.

Measurements only served to confirm these impressive subjective assessments. Crosstalk too is remarkably consistent at better than - 86dB overall, with just a rise to about - 80dB at 20kHz in the right channel only. Residual noise was at - 92dB unweighted with respect to full level, and even better with Aweighting, to confirm the quite remarkable silence one could experience during music pauses on the best discs. The square-wave gives evidence of the symmetrical ripple characteristic of the Philips technique of over-sampling followed by digital filtering-and going some way to explaining the excellent frequency response plots and very clean reproduced treble and percussion.

Speedy search and locate facilities are not a strong suit of the Philips players, compared with some of the rapid-cue Japanese machines, and it took about 15 seconds to go from Track I to my 'standard leap' to Track 15. Nor was I able to confirm the claimed 0.005% total harmonic distortion figure. Nevertheless, both these parameters are of high enough standards to meet all practical requirements. The real surprise was the superb error correction abilities of the CD303. It sailed through all three severe tests on the Philips 'Test 4A' disc-track interruptions, black dots and simulated fingerprint-scoring a maximum 0.9mm and 0.8mm for the first two tests and never showing any inclination to mistrack. This is good news indeed, and should mean that even slightly the worse for wear discs will play cleanly on this machine. Shock-proofing was also up to a high standard, and normal domestic bangs and footfalls should have no effect on playback.

The Philips designers have clearly mastered the electronic and error correction needs of CD reproduction to produce as sonically fine a player as any. The lack of real-time cueing, index scanning, headphone socket, variable output volume and other trickery does not detract from these sound-quality virtues, and the reduced price of £450 makes this excellent value for money.