If you are looking for all the bells and whistles that can possibly be incorporated in a CD player, the Marantz CD73 is probably not for you. On the other hand, if you want flawless reproduction from Compact Discs, superb error - correction capabilities, unusually good shock resistance, and a CD player that looks good and is easy to operate, the CD73 may be just what you are looking for. As is true of many Marantz products, the company has added its own special touch to this, their first CD player. 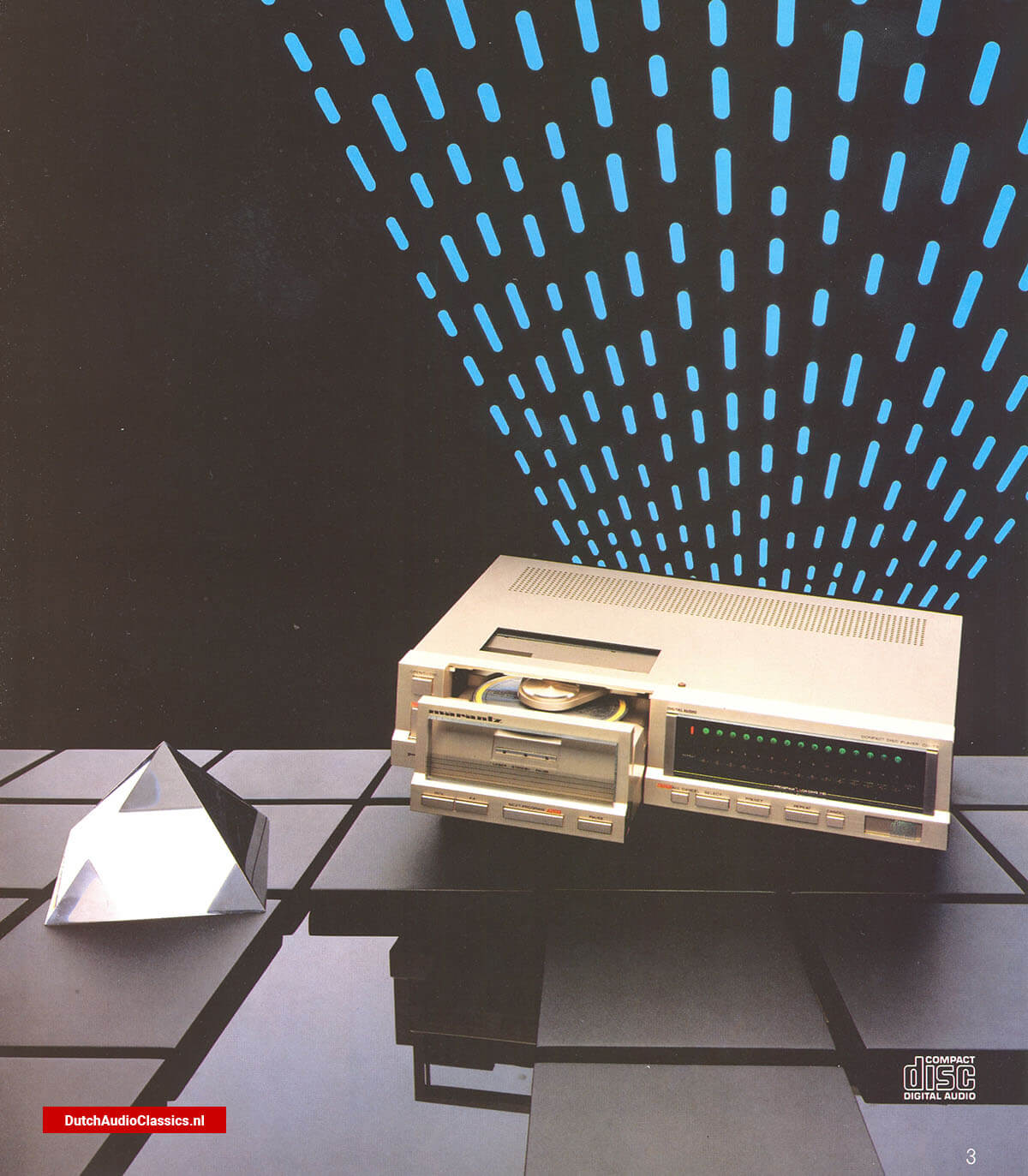 There is, of course, the familiar gold -anodized aluminum front -panel casting, which adds a touch of elegance to the unit. But beyond that, Marantz engineers have managed to endow the CD73 with a host of programming features and capabilities without ending up with a cluttered and intimidating front panel. Up to 15 different selections can be programmed (providing there are that many "tracks" on the disc being played) to play in any order. The programmed selections can be played over and over again, if desired, as can an entire disc. Should you change your mind after play has begun, you can cancel any track you decide you'd rather skip, and, of course, you can cancel the entire program at the touch of a single button. Should you decide you've heard enough of a given selection, a touch of another button advances you to the next pre-programmed or sequential track on the disc being played. Fast -forward or fast -reverse movement of the laser pickup is also actuated by front -panel buttons, but no audible sound is heard during these fast modes.

The front-loading Marantz CD73 resembles a modern cassette deck in its proportions. As for the features that Marantz chose not to incorporate (but that are found on some CD players), the CD73 does not have "phrase repeat" capability nor does it nave an elapsed -time counter. Neither is there any provision for index cueing or cueing by time into a given track. While a remote control is not presently available for this model, Marantz plans to introduce one later, and the presence of two extra jacks on the rear panel suggest that, when it is available, it will be a wired type rather than an infrared. Marantz has indicated that the remote will operate only four functions of the player.

A power on/off button and its associated indicator light, plus the "Open/Close" button for the disc compartment, are located at the extreme left of the unit. When the "Open/ Close" button is touched, not only does the entire disc drawer slide out, but the front face of the door swings down by an angle of about 45°, while the retaining arm (which holds the disc down during play) swings up and out of the way, to make disc loading that much easier. The fast re- wind, fast forward, "Next Program/Play" and "Pause" touch buttons are all along the lower edge of the drawer's front face. Most of the right half of the front panel is given over to a large display window. Arranged in a horizontal row along the top of the display area are 15 small green LEDs which illuminate behind highly visible numerals, 1 through 15. When a disc is inserted and the drawer is closed, all 15 LEDs light up. Corresponding orange dots of light below each of these numerals light up to show what track is currently being played. As play progresses, the green lights go out, one at a time, while the orange light moves along to indicate successive tracks being played. Programming buttons below the display area include "Stop/All Cancel," "Select," "Preset," "Repeat" and "Cancel."

These are used to pre-program disc play in any of the ways previously described. Indicator lights above the buttons clearly depict not only what is happening, but what is being programmed as well. For example, if you wanted tracks 2, 4, and 7 to play, in that order, you would push the "Select" button to advance the orange indicator light to track 2. The orange light would flash on and off until you pushed the "Preset" button, entering the instruction in the player's memory circuits. You would then push the "Select" button again, advancing the lower light until it is flashing beneath the number 4, at which time you would press "Preset" once again. The same procedure would be followed for programming play of track 7. Next, you would depress the "Play" button on the disc drawer. All but the desired track number lights would now be extinguished, the orange light would move to 2 (the first desired track to be played), and only the 2, 4 and 7 green LEDs would remain illuminated. The rear panel of the Marantz CD73 is equipped with the usual pair of audio output jacks (output level is not adjustable) plus a pair of jacks intended for the optional, four - function, wired remote -control unit. 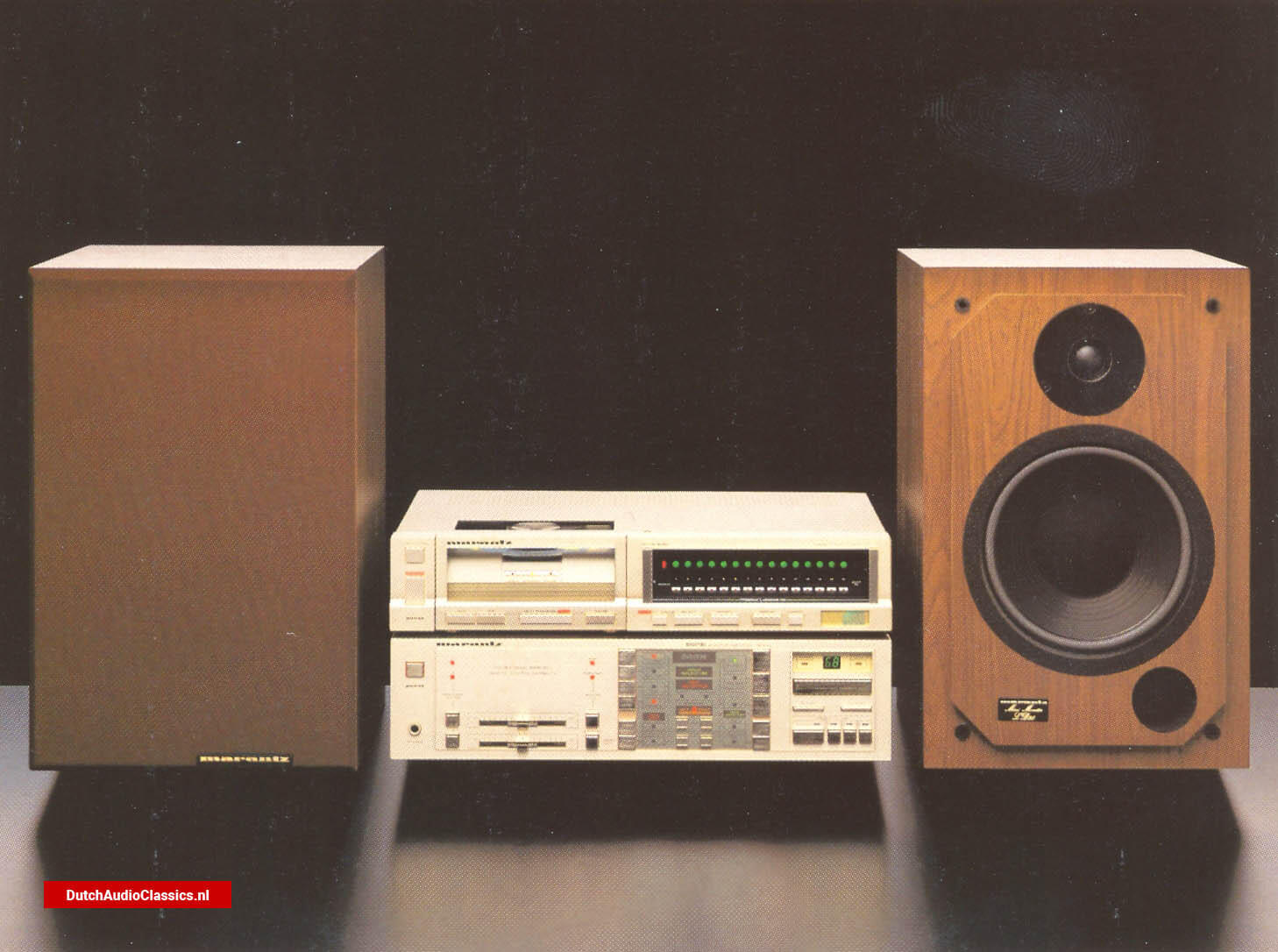 The CD Marantz 73 played through all my test disc's simulated defects without missing a beat. Only a very few players have done this.

Figure 1, which shows the frequency response for both left and right channels, was plotted using my Philips test disc's sweep signals, which run from 20 Hz to 20 kHz. Frequency response within this band never deviated from the ideal by more than 0.3 dB. Note that the vertical scale in this figure has been expanded so that each division equals 2 dB instead of the usual 10 dB. If the less sensitive scale were used, all you would see would be a straight line. Harmonic distortion at mid -frequencies, for maximum re- corded output, was 0.0045%, rising only very slightly at the high frequencies to 0.008%, as shown in the graph of Fig. 2. At a -24 dB recorded level, distortion increased to 0.025% at mid -frequencies, while at a still lower recorded level of -30 dB, distortion at 1 kHz (actually, the test frequency is 997 Hz) was 0.045%. Output linearity was accurate to within 0.1 dB from the 0 - dB reference level down to -80 dB, below which it became difficult to read output with any degree of accuracy because of equipment 'irritations. Stereo separation for both channels (plotted in Fig. 3) was better than 85 dB for low and mid -frequencies, decreasing to 78 dB at 10 kHz and 74 dB at 20 kHz. Intermodulation distortion measured a negligibly low 0.004% at maximum recorded output level, increasing to 0.03% at - 20 dB recorded level. Signal-to-noise ratio was 97 dB, unweighted, increasing to 107 dB when an A -weighting network was introduced in series with the measuring instrument. 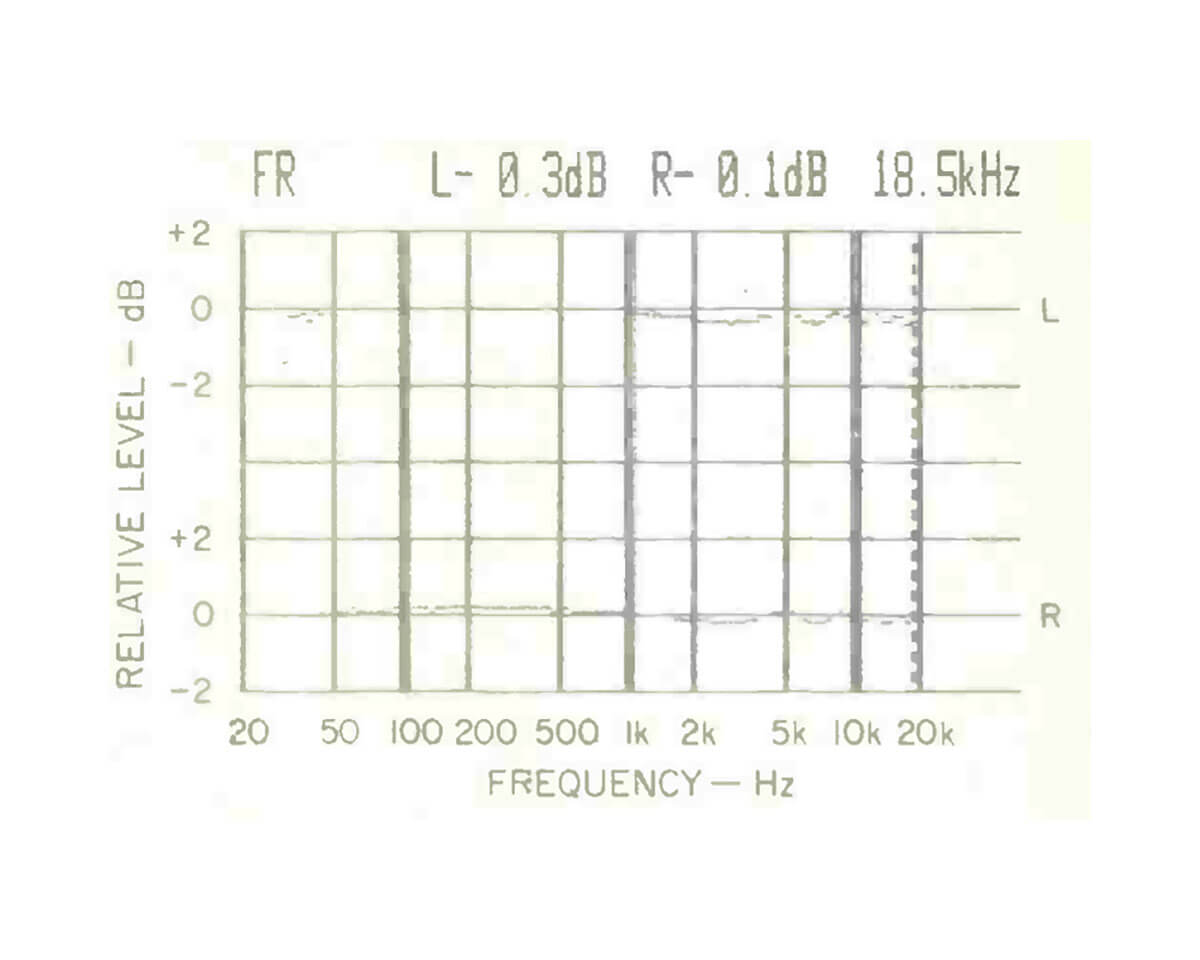 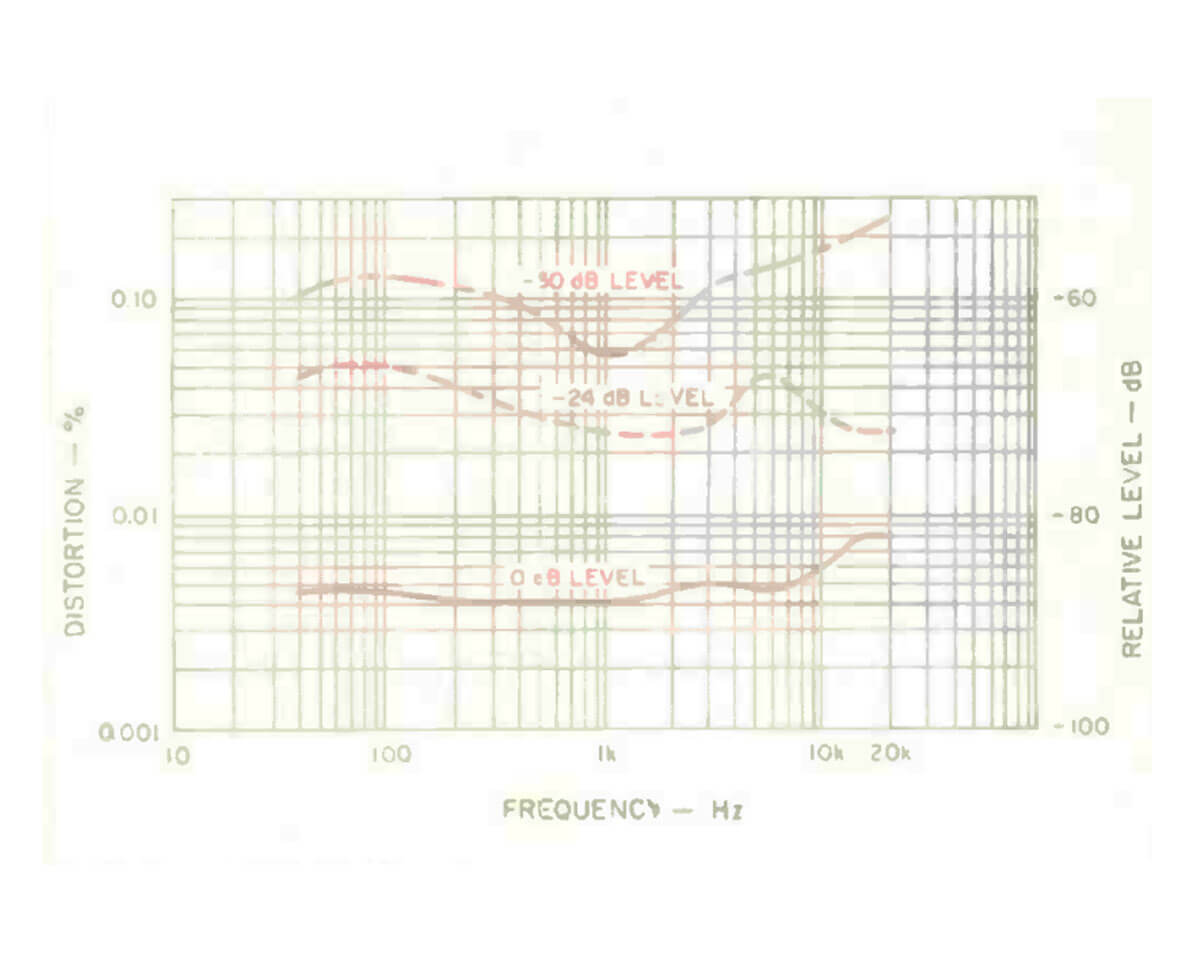 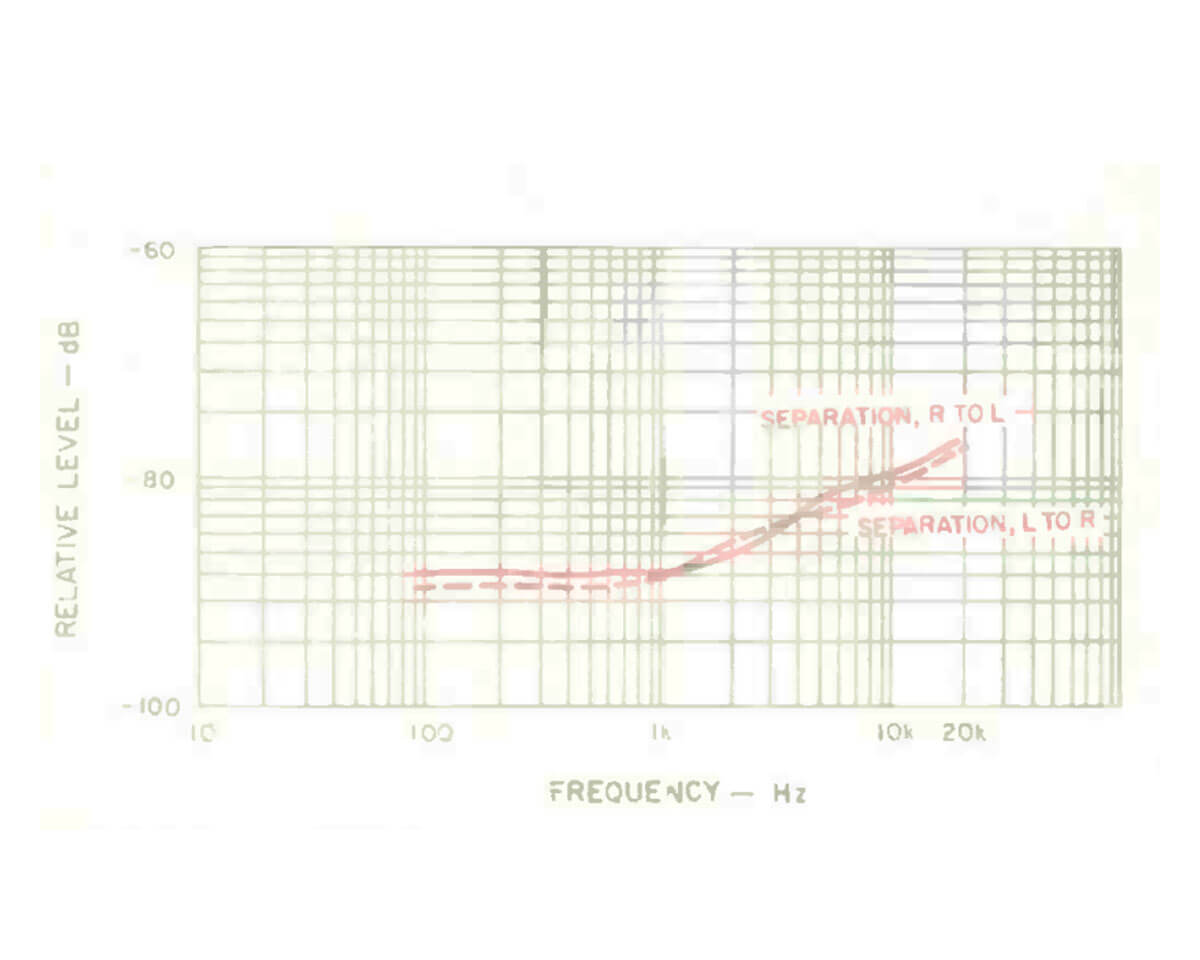 The shape of a 1 -kHz square wave as reproduced by the Marantz CD73 (see Fig. 4) was identical to that reproduced by other CD players (notably those manufactured by Philips for sale by Magnavox in this country) which employ pre-D/A digital filtering and oversampling. The same holds true for the single -pulse signal shown in the 'scope photo of Fig. 5. In fact, the Marantz CD73 resembles Magnavox's top play- er in many physical respects as well as in the features that it incorporates and those that are omitted. If you haven't already guessed, the Marantz CD73 is, in fact, manufactured for Marantz by Philips, its layout and performance characteristics having first been established by Marantz .engineers. A phase -check signal on the Philips test disc, consisting of a 2 -kHz sine wave reproduced by one channel output and a 20 -kHz sine wave signal on the other channel, was used to check phase error. When no phase error exists, the positive axis crossing of the high -frequency signal is supposed to correspond with the positive axis crossing of the low -frequency signal. As you can see by examining Fig. 6, that is almost precisely what happens when these signals are reproduced by the Marantz CD73. 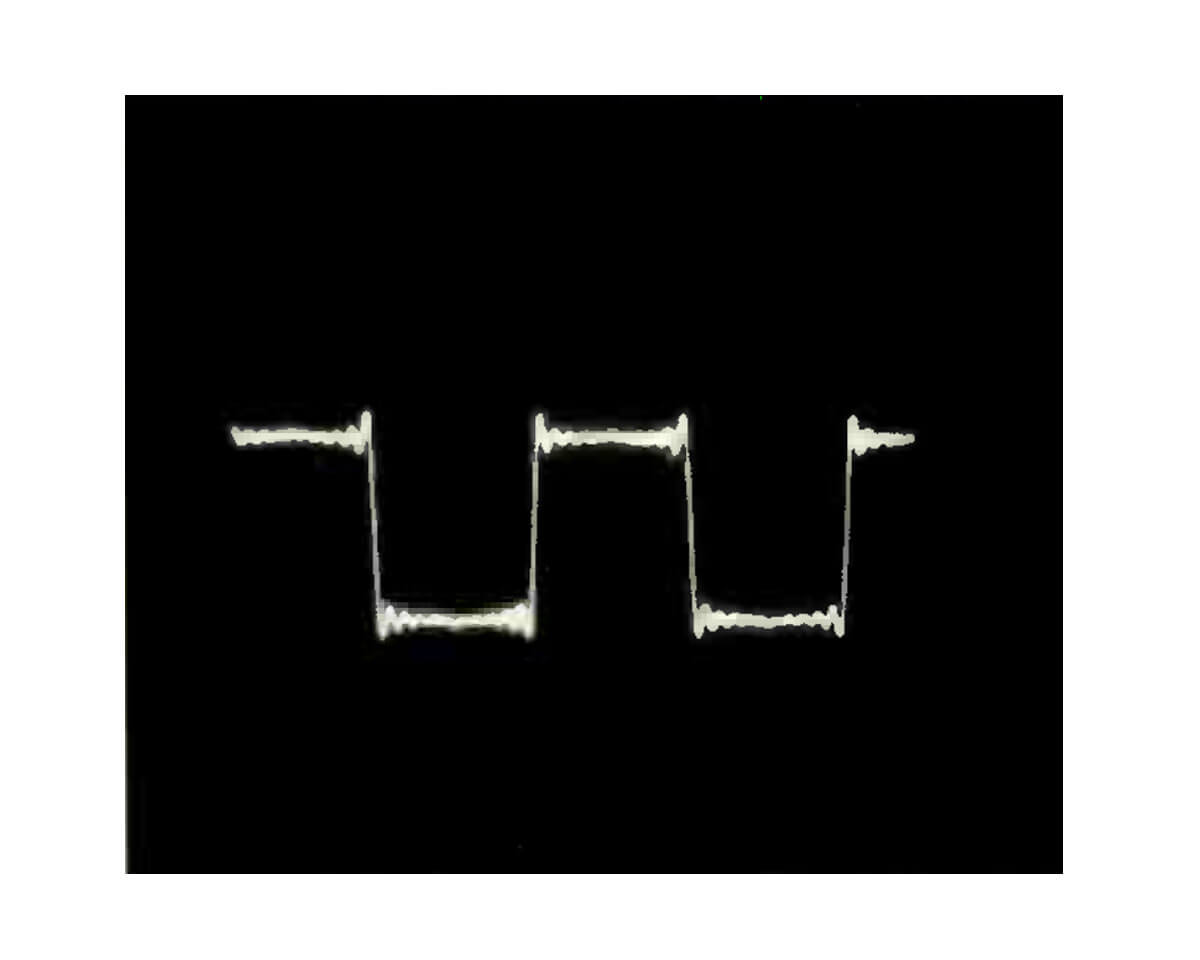 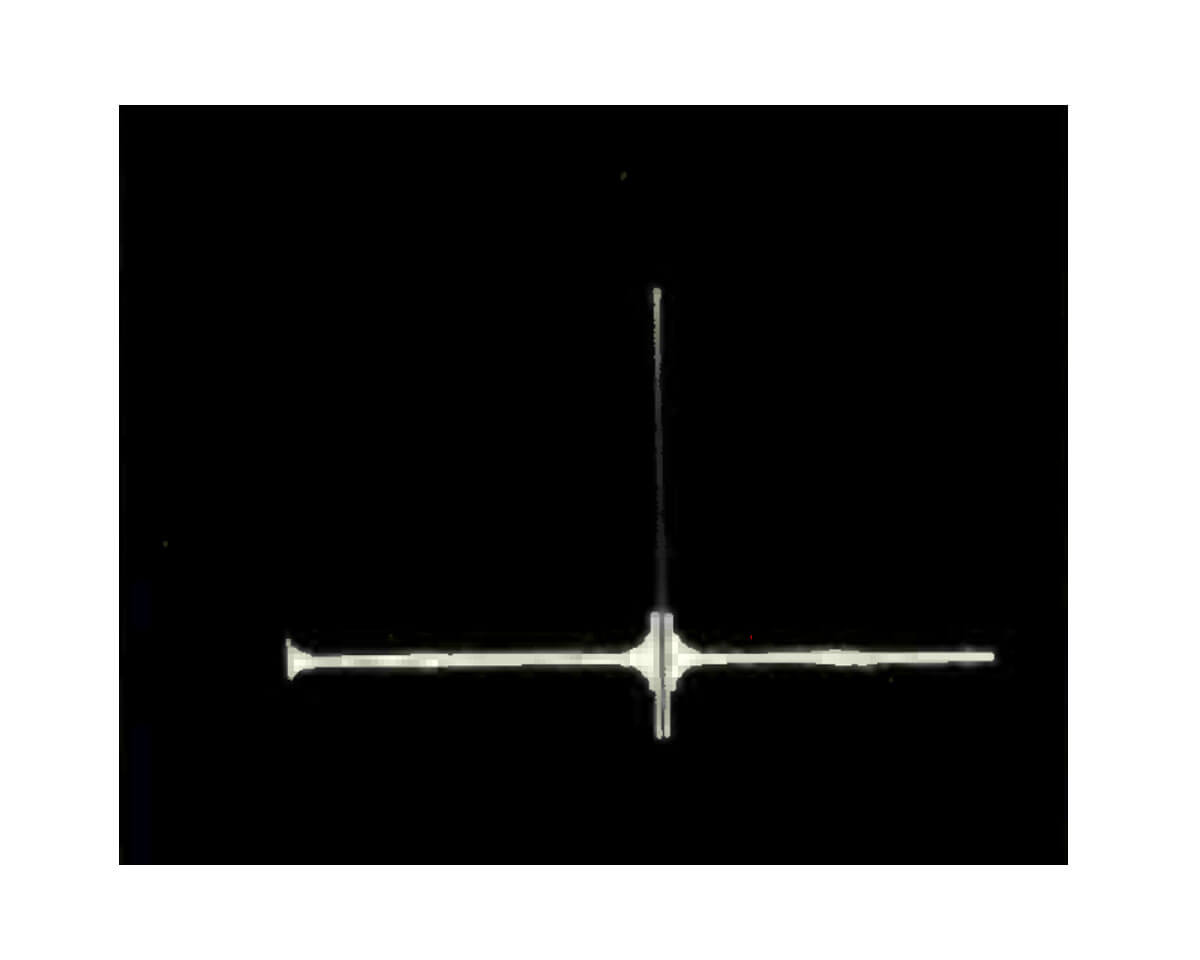 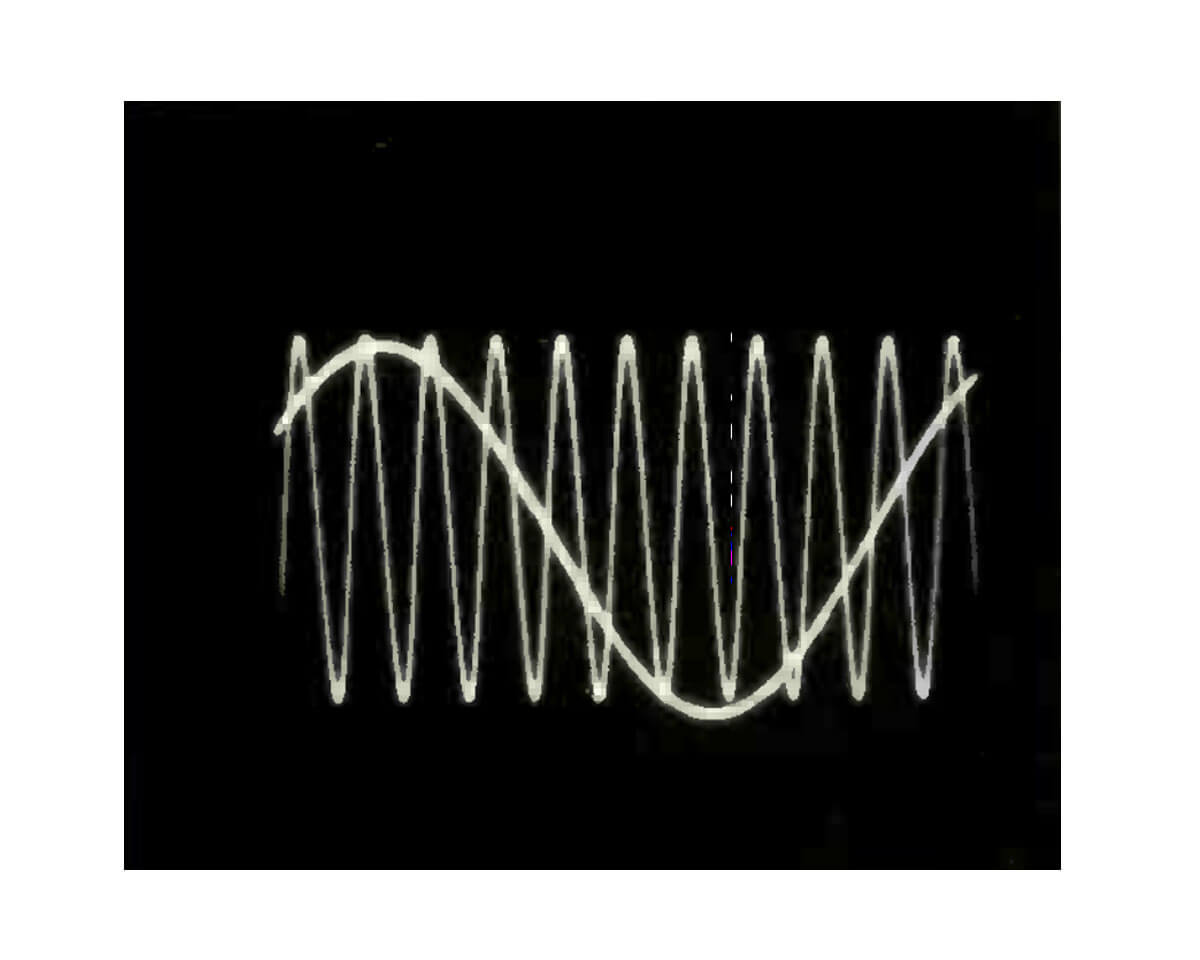 As I have mentioned before in these reviews, there are many critical listeners who maintain that such phase accuracy contributes to greater accuracy of musical reproduction and to an improvement in high -frequency reproduction in particular. I used my special error -correction test disc to check how well the player can overlook minor (and not so minor) defects in a disc. The test disc contains an opaque wedge of ever-increasing width, several artificial opaque "dots" (representing dust particles), and a simulated smudge. The Marantz CD73 was able to play through all of these defects without missing a beat. This means it was able to correct errors from obstructions as large as 900 microns in width or diameter and that it completely ignored the simulated semi - opaque fingerprint smudge. Only a very few CD players I have tested have accomplished this feat, among them-you guessed it-the Magnavox player. The CD73 was relatively impervious to mistracking when I tapped its surface or side panels. It took fairly firm blows on its outer case to cause mistracking.

Use and Listening Tests

I must confess that being limited to a maximum of only 15 programmable selections on a CD player can be a bit of a nuisance when testing such products, since one of my test discs contains 27 useful test bands while the other one contains 41. Of course, it is possible to play track numbers higher than 15 on the Marantz player by moving to track 15, and then selecting the "Next Program" button progressively, keeping count (or watching an oscilloscope) until the desired test signal is reached, but that's a bit cumbersome. When it came time to listen to music, this objection was quickly forgotten. There are virtually no classical CDs which contain more than 15 tracks (with the possible exception of some of the early sampler discs), and even in the case of pop records, few carry that many selections. 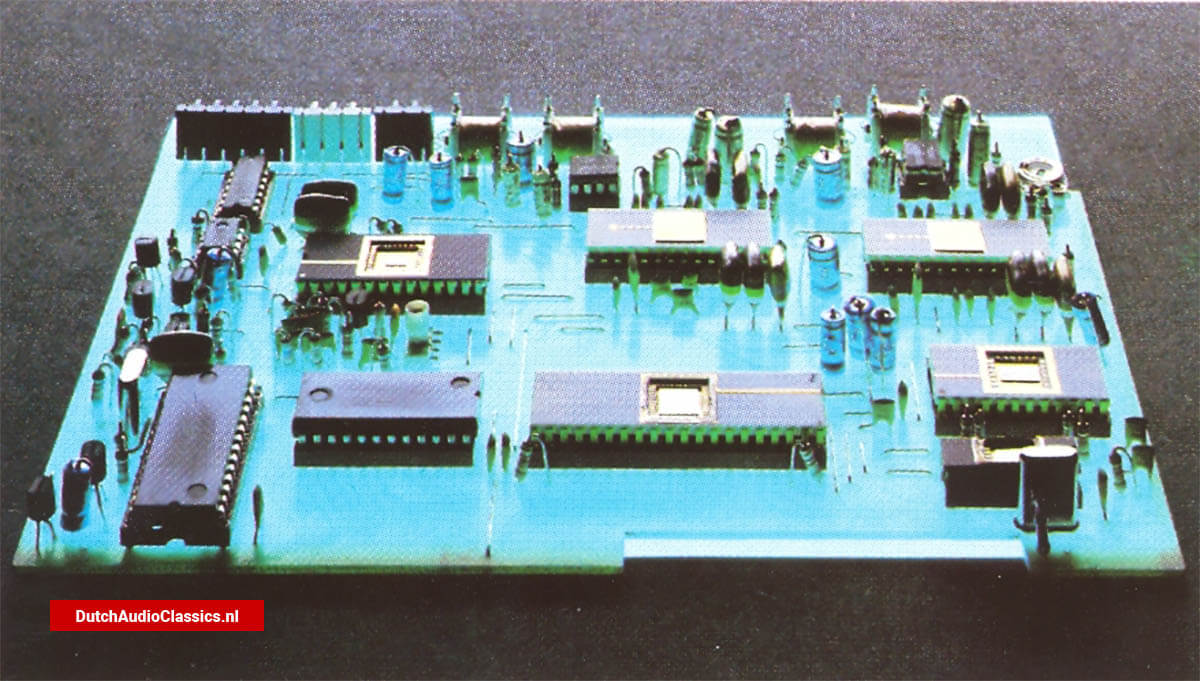 With that minor objection out of the way, I can attest to the fact that the Marantz CD73 is a superb performer in every way, both in the way it sounds (given some decent source material, which is no longer the problem it once was) and in its simplicity and reliability of operation. Scanning forward to find a high -numbered track does take a bit of time (12 seconds to get to track 15, from a "cold" start at track 1), but few of us, I think, would normally program play in that manner. Mostly, I suspect, we simply want to hear a Compact Disc straight through, and for that purpose, I can think of no other CD player which performs this function better than Marantz's first entry.