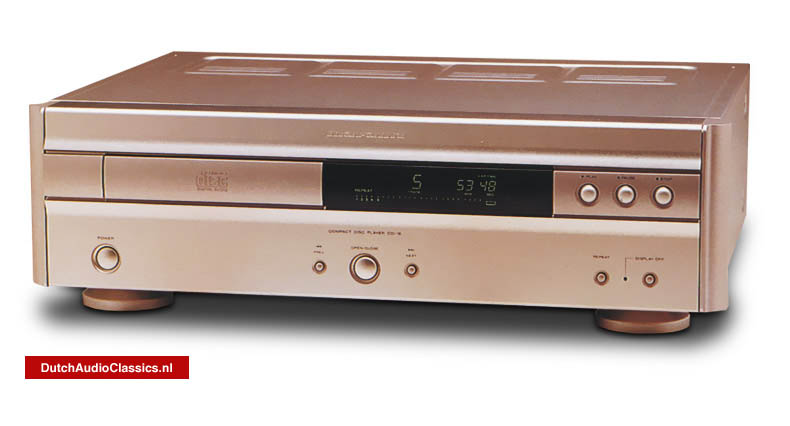 Conventional wisdom tells us that CD players can only have gotten better, and that any 1994 player will 'blow away' any from, say, 1989. Maybe this is true in so far as the transport sections are concerned. You might even use this to argue the case for D/A converters. And yet there are two 'vintage' players in my experience which are as musically satisfying as anything on the market today. And both of them hail from the 1980s, not the 1990s.

California Audio Lab's Tempest IISE has long been a fave of mine despite it employing one of the nastiest transports Philips ever unleashed. Those who recall that it's a valve player, meaning that its analogue section is tube-laden, will argue (correctly) that its appeal lay in the euphonic coloration provided by its tube section and that I'm 'wrong' to like it. Mazel tov, but then we all reserve the right to partiality based on personal taste, hence the allegiance by sectors of the hi-fi community to single-ended triode ampifiers, electrostatic or ribbon speakers, Linn electronics and other 'individualist' approaches. But the second player which still holds its own despite the passing of whole generations is the non-valve Marantz CD-12, the company's first two-box, flagship player.

It's no coincidence that the two 'survivors' are the two I named; Marantz' Ken Ishiwata told me 'way back when' that the analogue euphony of the Tempest IISE was his benchmark for the solid-state CD-12. And it's Ken again who has turned to the past to provide us with something luscious for the present. This time, though, he only had to look into the Marantz archives, back to his own creation. The new CD-16 is, in effect, a user-friendly, affordable, 1990s version of the CD-12 by way of the current flagship model, the CD-15 -- the latter a £4500 beast. (It's interesting to note that, were the '12 to go back into production, inflation would see to it that it sold for around £7000 at today's prices.) The CD-16's externals give away nothing as far is this illustrious heritage is concerned, though the £1200 price tag tells you that it's not a replacement for the CD52.

A single box player featuring the clean family styling that is Marantz in the mid-'90s, the CD-16 is truly an 'economy CD-15', lacking for example the latter's solid-aluminium construction. But its innards are completely copper-clad like the dearer sibling, all wiring is oxygen-free and both machines are DAC7-based. Instead of the CD-15's toroidal transformer, the CD-16 uses an E-core type and it is denied the CD-15's balanced outputs. Both players use the same DACs, but the CD-16 has 'regular' rather than computer-matched pairs. One other difference is that the nearly-four-times-costlier CD-15 wears a bit more shielding.
That's the physical side of it. But Ken goes on to say that Marantz has recognised the need for a sort of sonic tailoring, which reminds me of a similar dichotomy in the philosophy of another manufacturer. So allow me to digress for a moment into loudspeaker design, just to help you to understand why the CD-16's sound doesn't resemble that of the CD-15 on which it is modelled.

When Sonus Faber introduced the Guarneri Homage, listeners noted that it was quite unlike the similarly priced Extrema. The Guarneri is all finesse and neutrality and delicacy, while the Extrema is power, energy and precision. When asked about this, designer Franco Serblin said that one represents the heart and the other the mind. Or, if my limited Italian is up to the task, one represents art and the other technology. Either way, I was satisfied by the description, seeing in it not an irreconcilable conflict but an ideal resolution to a problem which has caused a major schism in audio. Tubes v. transistors, LP v. CD -- they're all heart/brain issues, the stuff which keeps us all insane.

Ken Ishiwata pretty much said the same things as Franco Serblin, Marantz acknowledging a need to address both approaches to digital playback. And the CD-16 most assuredly leans toward the heart, toward art and toward analogue traditions which digital purists would have us abandon. (The assholes...) Ishiwata attributes the sonic differences between players which share so much in common to the type of power supply and its application, to the mechanical construction and how the unit is tuned and to the configuration of the output stage. "The DAC doesn't determine the sound. The execution does," he told me when the player was delivered for review. "Analogue skills determine the sound. Digital engineering can never do this." It's definitive, confident statements like this which explain why Ken's mug appears in Marantz's European advertising.

Minimalism defines the CD-16's front panel. A bulge across the top contains the orifice for the CD tray, the comprehensive display providing time and track information and the play/pause/stop buttons. Below this, in the flat lower portion, are the on/off, previous/next, repeat and open/close buttons, as well as a button to partially or completely shut off the display. All functions bar power on and open/close are duplicated on the hand-held remote controller, along with a numeric keypad and all subsidiary function keys such as index facility, FTS track programming and A-B repeat mode.

Audiophilic schizophrenia characterises the back panel, and I can only imagine the conversation among the designers and the bean-counters as they chose between necessary and optional facilities, cost-related or otherwise: "Well, TOS-link isn't exactly worshipped among high-enders, so why don't we ditch it?" "AT&T optical will push up the price." "Maybe we should incorporate balanced outputs." At some point, someone decided to opt for the same minimalism which determined the frontal terrain, probably realising that -- no matter wha you might include -- you'll never be condemned by anal audio purists for leaving something out. And so all you find at the back are phono outputs for the analogue signal and a brace of RCA-type coaxial digital outputs.

Measuring a slightly wider-than-usual 455mm because of 'wings' on the fascia (and these have nothing to do with feminine hygiene, despite the recent and wonderful Tampax ad on TV comparing Compact Disc to a tampon...), the CD-16 seems substantial yet compact: height is only 138mm and the depth 360mm. But pick up the sucker and savour its 13kg heft. You know that this is one solid machine. And the solidity extends to the inclusion of a die-cast version of the CDM4 transport rather than the nastier plastic version. Whether or not the CD-16 really needs cooling facilities, or maybe it's just a stylistic link to a certain valve player, the unit features proper angled vents across the top and a beefy heat sink on the back. All told, this is one substantial player, the antithesis of the featherweights in the £200 sector.

Ken Ishiwata's description of the the CD-16 as 'son of CD-12' was right on the mark. One of the '12's greater glories was always its lower registers. The CD-16's bass slides inbetween the soft, full cream-cheesy bottom of the CAL Tempest and the drier, snappier bass of the 'techno' school -- just like the CD-12. This is CD bass for LP lovers, rich and plentiful and controlled without suffering either too much tube-like sogginess or (worse) the crunch of a disco. The debut CD from Collective Soul (on WEA) is my latest low-end yardstick -- there's Bass From Hell on this set -- and it has the ability to confuse lesser players. More worrying is the way that the bottom octave info can overwhelm the listener, real stomach-churning quantities and extension. The '16 keeps it all together while never suggesting for a moment that there's any unnecessary filtering or unwanted restraint. This is the sort of bottom-end juggling that separates the budget from the high-end.
But the signature sound which makes the CD-16's antecedents such stand-out players is the analogue replication evident in the midband on up through the treble. At the risk of sounding like an apologist for reality -- real, acoustic music is analogue whether you like it or not -- the CD-16 succeeds in carrying on analogue traditions in an increasingly synthetic (read=digital) world.

As the spread of compression and data reduction becomes that much more threatening, that much more of an attack on natural sound, we must be grateful for gestures such as the CD-16. The midband in particular is a stress-free zone, dynamic and open and lucid, yet possessing texture and warmth. This is no stripped-down cyberworld impression of sound. It's lush and three-dimensional, with body and substance. Moreover, it has dimensional 'credibility', and I'm tempted to think of it not just as CD-12 Redux but as a grown-up version of its little brother, the CD-52 MKII SE. It has the musicality, the life and the 'presence' of the '52, but with transparency and detail not available from that £299 treasure.

By the time your attention focuses on the treble, you expect maybe a dulling, a roll-off that continues the sweet sensation. Not so. The CD-16 has extension all the way to inaudibility, and transient attack that's only a few points shy of the speed or coherence than that offered by champions from Krell or Theta. What you've paid for, though, is the flipside of the purely techno, so you do get the warmth and perfectly graduated decay that suggests an all-analogue system. It's a minor trade-off, like Guarneri versus Extrema, but there's no trickery. You know when you go in, with eyes open, that one talks to the brain, the other the heart.
This late into the CD era, when so much of hi-fi's evolution is taken as a fait accompli, it's almost too much to demand of most manufacturers that they provide a choice which veers from company policy. Marantz appears to have made a conscious decision to serve both the music lover and the audiophile -- two different beasts whether we like it or not, and usually only served by single components which cost funny money. With the CD-16, we have a player which does at its price point what the CD-52 MKII SE did for the budget sector: it offers musicality without information loss, a semblance of analogue warmth from an otherwise clinical medium. It is definitely not the player of choice for digit-heads. It's what you feed into your single-ended, triode whatever without feeling like Quisling.