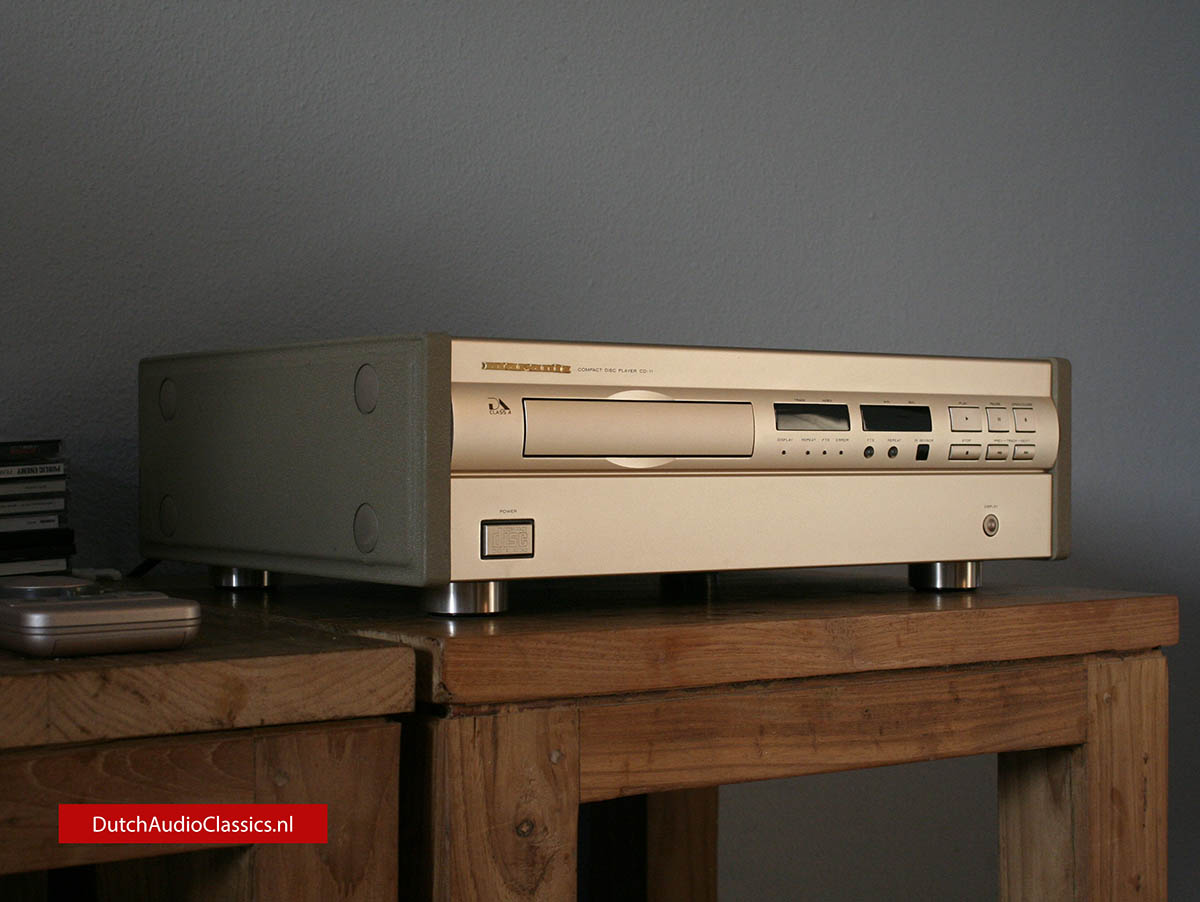 Bravery in hi-fi usually means having the nerve to release something which looks unlike everything else. Slope-fronted Yamahas and Michaelson Audio's Chronos amps spring to mind. But real bravery is admitting that you screwed up. And Marantz has done so with the much-loathed CD-11.

That's not entirely correct. The Japanese liked it, and apparently the French think it's the greatest CD player on earth. But here it was consistently disliked, the consensus being that it sounded flat, sluggish and uninvolving. I managed to resist reviewing it, but my opinion was sought in a listening session when I reviewed the company's Music Link products. I, too, was suitably underwhelmed by a machine which was intended to stomp my reference CD-12 from the same firm.
I've now spent time with the CD-11's replacement, compared it to my battery of CD players as well as an original CD-11; it's fascinating to hear how a company will go to great lengths to save face. And what Marantz did was involve Ken Ishiwata, who didn't just save face: he invested it.

Keep in mind that the sample I used was the first to reach these shores -- at the time the only one in Europe. At this point, I can't even tell you if it's the CD-11 SE or CD-11 Mk II or CD-11 Revised, nor can I nail its price down to anything other than 'circa £2000-2500'. But what I can tell you is that it's what the original should have been.
The only way you can separate the new from the old externally is by turning'em over to look for a fifth 'foot'. This has been added for better isolation, and probably to add support to what is a hefty machine. Not that the early one sagged.

Inside, it's a different story. The new version's main ingredient is DAC-7, the latest Bitstream chip and one which is said to 'cream' the earlier version with its 7321. I had a chat with fellow HFN/RR contributor Paul Miller about it and he confirmed my findings about sonic gains in four key areas -- precisely the areas where the CD-11 needed the makeover. In simple terms, the DAC-7 separates the analogue and digital sections, and it equals a 7350 chip (used as a digital filter) plus a TDA1547 (for the D/A conversion). In the CD-11 update, two TDA1547s are used in dual-differential mode.

Other changes include a completely revised power supply, new servos for the motor and the retention of the cast CDM-4 transport but with new servos. I seem to recall Ken saying that there may be an upgrade program for owners of the early CD-11, but it would be costly -- probably half the price of the player -- as the upgrade is substantial.

SEVEN-UP Marantz has relaunched the ill-fated CD-11 with the DAC-7 chip -- are the bits onstream?

So what was I looking for? I identified four areas, as mentioned above, which separated the CD-11 from world-class players...at least, those costing around £2k. The replacement had to improve on transparency, detail, three-dimensionality and dynamic contrasts, exactly what I expect high-end machines to offer over bargain-basement models. In addition to a face-off against its predecessor, the CD-11 Revisited had to stand up against the CD-12 it was designed to overtake, the CAL Tempest II SE and various stand-alone sections including the Audio Research DAC1, the Audio Alchemy Digital Decoding Engine and Meridian's 200 transport and 203 D/A converter.

Using discs or tracks of which I had two copies -- Patsy Cline's 'Crazy' CD single, George Strait's 'All My Ex's Live In Texas' and assorted Lyle Lovett -- I was able to employ quite revealing A/B tests, especially as Marantz had supplied two sets of their balanced output leads and I had two sets of MasterLink's new Masterlink Clear. This ruled out any differences, and I swapped discs, too, just in case the pressings were identical.
The most immediate improvement wrought by the DAC-7 etc was an opening of the sound, the CD-11 Modified sounding 'bigger', more upfront and less congested. The actual sonic 'picture' seemed a couple of feet taller, 20 percent wider and twice as deep. An instant impression was that of going from Viewmaster 3-D to something more real and tangible.

Listening into the sound, it was easy to detect greater transparency or, more precisely, a lack of the clouding which marred the CD-11. In addition to giving the impression of a more forward sound, this aspect of the improvements allows the listener to catch subtle sounds and low level effects which were quite obviously masked by the earlier unit. In total, then, the resultant gains mean greater clarity and detail, with a far more precise mid and top end.
The Patsy Cline vocals, especially the dynamic swings on 'Sweet Dreams', tested both the transparency/clarity issue and the handling of textures. In this case, there shouldn't be any, and there weren't. It meant that Marantz had succeeded in eliminating a layer of fine grain which compromised clear and/or glassy sounds, while adding a layer of muck you had to listen through, if possible.

And the Cline vocals tested the gains in dynamic contrasts, the late, great country warbler having a microphone technique which must have popped a few capsules in Nashville. The CD-11 Mk I did it it steps; the CD-11 Reincarnated handled all transitions with a smoothness approaching the consistent see-saw swing of the Audio Research DAC1 and the CAL Tempest.

I still regard the CD-12 as one of high-end audio's best kept secrets, probably because it never achieved global acclaim. And why? Because it was a Europe-only model. This denied it exposure to the crucial US market...which is exactly where the CD-11 Revived has to succeed. This product will be near the top of a range used to re-launch the marque as a serious company in the land of its birth. And I think it can do it. The CAL remains my pet player as it's the most 'analogue' of all the machines I've used. The CD-12, while bettered in many areas, still possesses a shimmer and 'near-analogueness' which even the CD-11 Reborn can't match. The Meridian products represent better value for money. But this face-saver produces sound so consummately musical, so utterly coherent that it deserves to sell in record numbers, especially among those who find comfort in the build quality, reliability and backing of a manufacturer like Marantz.

I think that the invasion team on the other side of the pond can sleep deeply tonight.