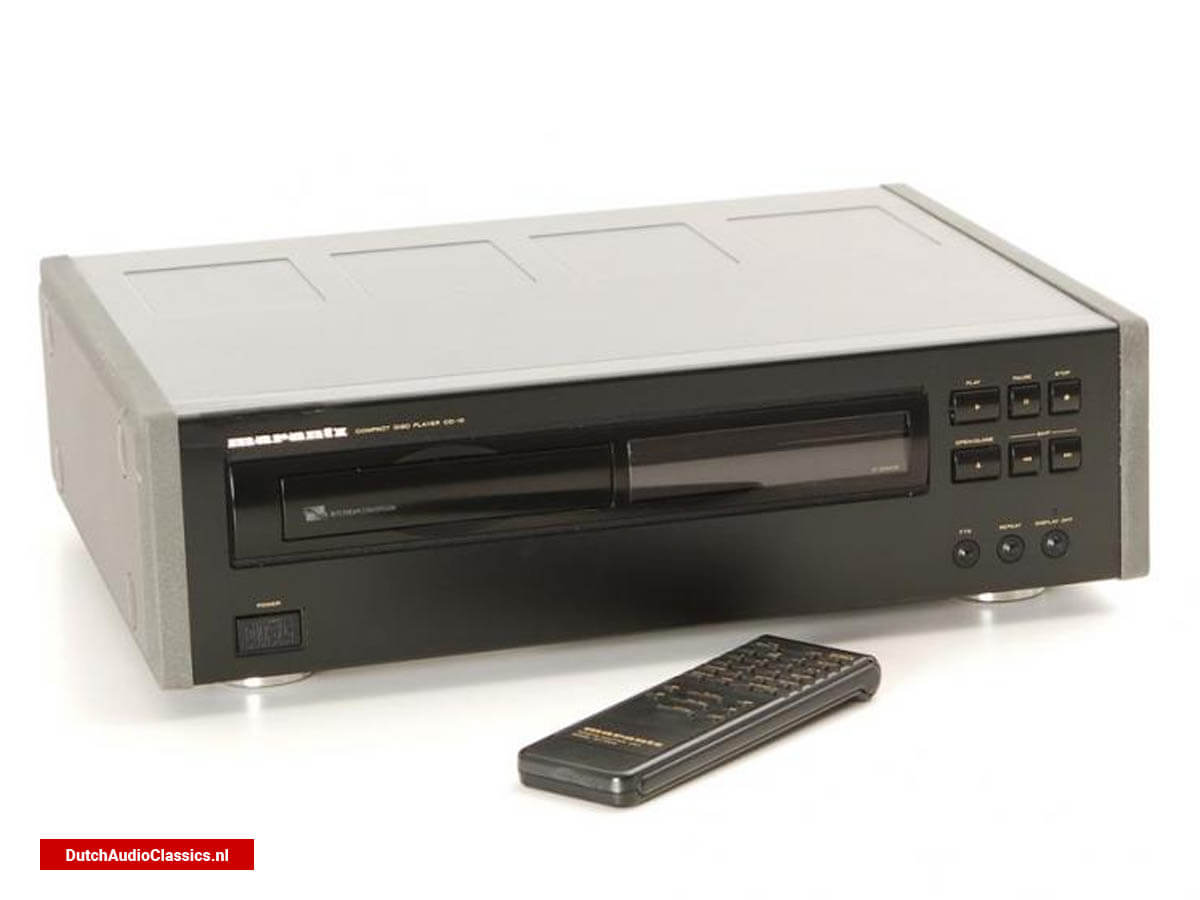 Marantz has made a habbit of producing excellent CD players, Jonathan Kettle asks whether the latest of the company's high-end models is as outstanding as its less expensive siblings. Try to imagine the CD player market without Marantz. Impossible, isn't it? Rather like The Beatles without John Lenon, a vital driving force would be missing.

Marantz has been the class act making the most of its parent company's latest, hot-off-the-CAD technology. The one exception, until the comparatively recent introduction of the Marantz CD-52 at least, has been BitStream. While Philips' introduction of 16-bit DACs and then four times oversampling created a wealth of promplty seized opportunities for Marantz in the late eigthies, BitStream proved a tougher nut for it to crack. Somehow Marantz's multi-bit CD players overshadowed its Pulse Density Modulation machines, particularly at the top of the range. The Marantz CD-94 was acclaimed and the Marantz CD-12 was admired, but the BitStream alternatives all seemed to suffer from the classic, though paradoxical trait of high resolution blandness.

The Marantz CD10 is Marantz's answer to what must be seen as just criticism. The absence of new Philips digital-to-analogue converters has to some extent taken the heat of Marantz, allowing its design engineers to concentrate on maximising the performance of the BitStream components that they already know. The result looks like overkill. The Marantz CD-10 has everything from DAC7 and a 20-bit, eight times oversampling digital filter to the latest Marantz die-cast alloy professional laser mechanism and anti-vibration construction.

Par for the course, a cynic might say. What isn't quite so predictable is the way everything links together to achieve Marantz's goals of low distortion, high resolution, wide dynamic range and excellent stereo imaging. The point of the Philips CDM-4 mechanism is to accurately position the single beam laser pickup, mountend on a magnetically activated swing arm, over the CD. A precision of one micron is claimed. The Open/Close mechanism doesn't set new speed records, but the laser does quickly get to work finding programmed tracks. You should preset the volume level to avoid missing the first few seconds of the track.

While on the subject of case of user, the absence of a cue/review control on the facia is a suprising omission, and the juxtaposition of the few controls isn't ideally conceived. Why place Stop immediately above the Track select buttons? I'd have thought Play would make more sense here rather than diagonally opposite. On the plus side, Marantz has fitted a Display Off control. But why the FTS and Repeat buttons? This is an audiophile player. Gadgets are a turn-off to most of the hard-bitten audiophiles I know.

What will go down a storm is the robustness of construction. How many CD players do you know that have a 3mm thick alloy top and bottom plates, a zine aluminium metal alloy chassis frame and heavy-weight side panels (zamac) for good measure. This must be one of the least vibration-prone $1000 CD player ever made.

Once digitally filtered, the signal undergoes third order noise shaping. Dual differential DAC7s then handle non-onverted and inverted inputs for both the left and the right channels. This means that the player uses two DAC7 chips as distortion self-cancelling devices. Marantz's realisation of DAC7 isolates the analogue from the digital stages of processing with a view to achieving high resolution, and the exceptional musical detail and transparency demanded of a CD player at this price level.

Isolation of the digital and analogue circuits is maintained by the use of dedicated and 'optimised' power supplies. The mains transformer from which all the local supplies take their feed is linked to the 240V/50Hz source by means of oxygen free copper cable and a moulded two-pin plug.
Judging by its internal construction, build quality, and all-round hunkiness, the Marantz CD-10 really means business. I left it switched on but starved of music for a few days until I was sure that its nether regions were fully warmed up. When i finally pushed some CDs forward for its delectation it was obvious that the strategy had paid off. Many CDs that i knew well gained new life when played on the Marantz CD-10. It was as if they'd been fed through a dynamic range expander.

At first this was quite disconcerting. Huge washes of sound replaced neat, tidy, compartmentalised presentation often there was acres of extra space. Yet the best modern ECM jazz recordings projected with almost indescribably vivid percussion detailing and rhythmic intensity. It's a rare combination: the Marantz CD-10 offers up detail you'd hardly believe possible, a true sense of acoustic space, and gives a tangible weight to individual instruments.

But there is also a down side to such high resolution of information. Like the best monitor speakers the Marantz CD-10 tells you not just what you want to hear in the music, but also a lot about album production that you might prefer to gloss over. Details such as the awkwardly treble-accentuated mastering of the Mobile Fidelity release of Cat Stevens' album Tea for the Tillerman, and the fiercely brilliant violin sound on the Bychkov/DG recording of Mendelssohn's Italian Symphony. Exhilarating hi-fi isn't always the most relaxing or comfortable of experiences. This was certainly true sometimes when listening to the Marantz CD-10 feeding the Unison Research 845 Absolute amplifier and Snell Type K/II loudspeakers (with Audio Note silver cable throughout).

Despite revealing some technical flaw in Miles Davis' Round Midnight the Marantz CD-10 highlighted the superb performance and largely sound engineering of this album. The occasional tape splice was audible but this didn't spoilt the quite extraordinary depth and raw power of this sixties jazz classic. Such space and atmosphere. Real power and weight from the trumpet, sax, percussion and bass.

Unfortunately it wasn't safe to play every track from the Rain Tree Crow album. The sibilance on Sylvian's voice sometimes seared across the room. But then the percussion, vocal and synth lines on many of the other tracks were quite spellbinding, suggesting a less than totally consistent recording from track to track on this mainly well-engineered jazz/rock album.

The way the Marantz CD-10 dealt with Pavarotty was something of a surprise. His recording with Karajan and the LPO of the aria Che Gelida Manina from La Boheme isn't one of Decca's finest, but the Marantz CD-10 captured more of the grace and musical integrity on this disc than the majority of CD players manage. The larger than life sound of Pavarotti, sobs and all, still dominated, but the orchestra accompanied with more than the cursory approach I'm often reduced to accepting.

The bottom line on the Marantz CD-10 is that it's that rarest of CD players, a machine that can resolve the finest of nuances without driving you to distraction. Its magnificent build quality and intricate engineering enable the Marantz CD-10 to capture a quite startlingly wide dynamic range. If some albums sound overpoweringly incisive, I suspect that this is more a reflection of deficiencies in the production of particular discs than a problem with the Marantz CD-10. Even so, many less than ideally recorded discs were a revelation.

The Marantz CD-10 sorts out recorded acoustics, instrument detail and the rhythmic pulse of musical performances with uncanny ease. Like a good monitor speaker the Marantz CD-10 opens the window wide. Make sure that the rest of your system can cope with everything that flies in!