The Philips on the photo is an early Philips SACD prototype player made before the SACD disc specification was complete. Andrew Demery, who was a research scientist at Philips and joined the SACD developing team at Philips and Sony, tells us about this prototype: 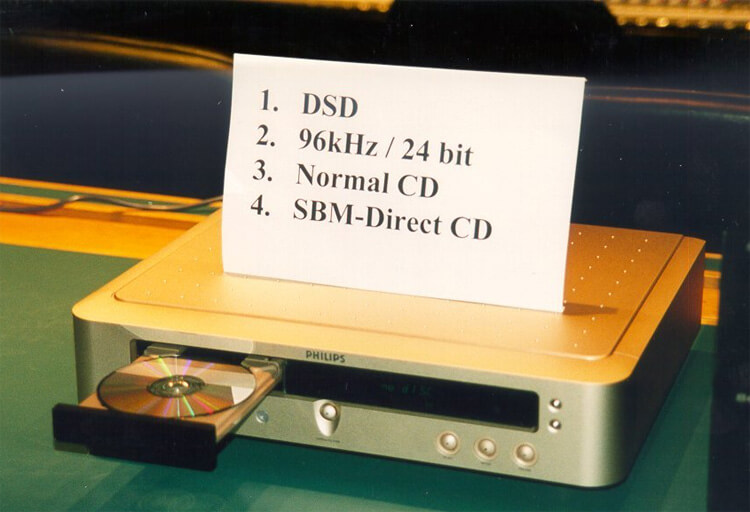 "The unknown Philips prototype used to be a part of my kit. It had a very short lifetime. I can't remember if it was given any identifying name or number. It was a fake SACD player, made BEFORE the SACD disc specification was complete.

So, to show the concept, a 4x CD-ROM drive was used to play Stereo SACD quality from data CDs.

The chassis again was created by Marantz, but no production player ever had this particular look (they went for the SA-1 style, and lower versions of that: SA-14, etc.).

As for the internals, I think the audio section was again based on the DAC 7, though I can't remember whether this was specially made, or simply used the audio stage of an existing Marantz CD player (e.g., the CD-17 or CD17-KI) coupled to a custom disc-engine (the 4x ROM drive plus decoding electronics). It had balanced XLR outputs to be compatible with the rest of our demonstration gear at that time.

Once prototype SACD players appeared, it was no longer required, and I can't remember whether it went into storage at Philips Research Labs., was returned to Philips Consumer Electronics or returned to Marantz --it was a long time ago!

If I had to guess where the photograph is from, I would say the Control Room at Studio 3 in Abbey Road. We were there in February 1998 and had Studio 3 booked for several days. Sony's Ayataka Nishio was in the Control Room demonstrating the difference between DSD, 24/96 PCM, 16/44.1 and 16/44.1 created using SBM-Direct down-conversion from DSD, hence the piece of paper atop the player. The comparisons were done from a prototype Sony DSD hard-disk recorder, not the prototype player (so I have no idea why the paper is on top of the player!). While all this was going on, I was in Studio 3 itself demonstrating some of the earliest M-ch DSD recordings.

SACD was introduced in Japan in May 1999, pre-production players would have been ready some months before launch, so this player filled a gap between 1997 and the end of `98/beginning of `99.

It was a very pretty player, and it was a shame that Marantz never put it into production."