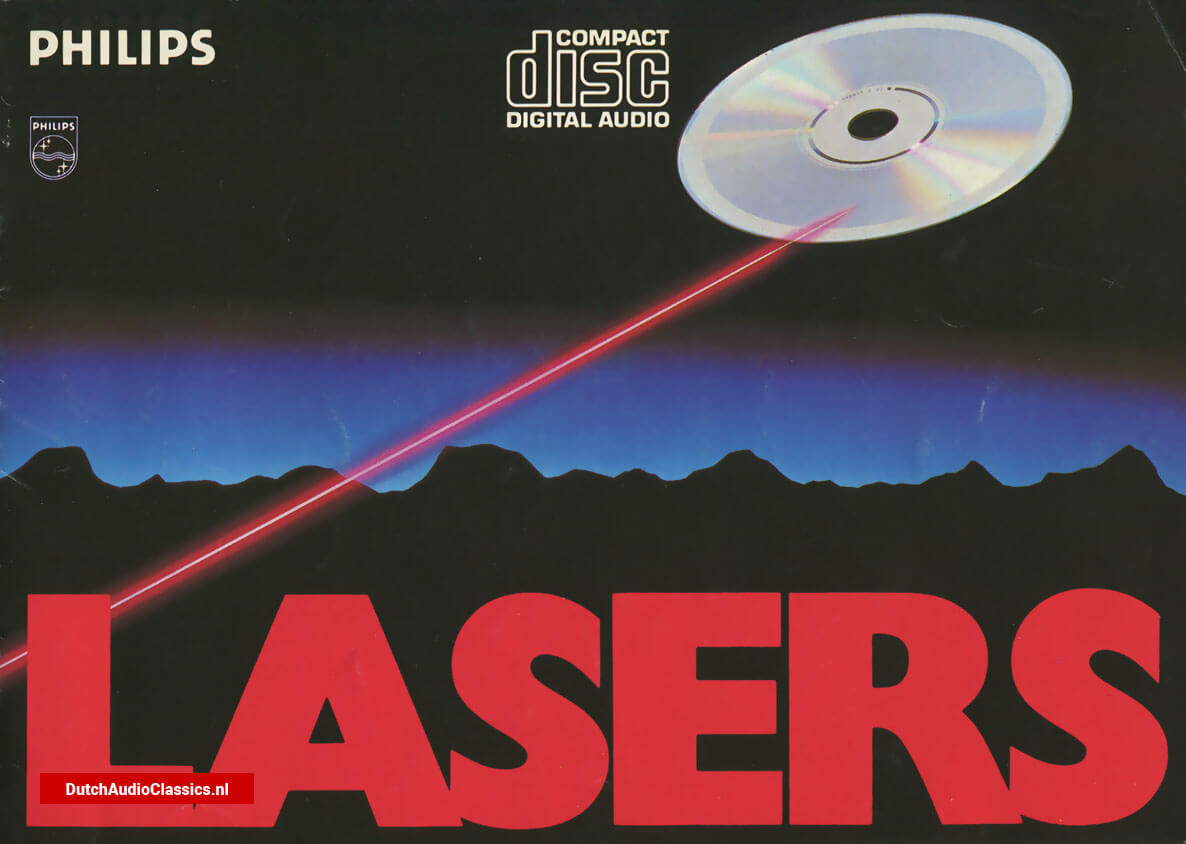 Fortunately for mankind, the truth is different. Lasers are indeed one of the biggest of recent discoveries - but they have been tamed. In the vast majority of applications, lasers are not only perfectly harmless, but bring many benefits. Although it is little more than 20 years since the first laser won its inventors the Nobel Prize, different types are being extensively used in such fields as scientific research, modern manufacturing industry and various branches of medicine. Lasers can be used to create brilliantly spectacular lighting effects and, in small, low power form, they are ready to become fully house-trained - as in your new Compact Disc Player.

What is a laser?

The word Laser is an acronym; it is an abbreviation of 'Light Amplification by Stimulated Emission of Radiation'. The key word here is 'amplification'. A laser is a light amplifier, producing light in a highly intensified form.

Ordinary white light is composed of all the colours of the rainbow. It is naturally diffuse and, although it can be directed and focussed, the beam is never very sharp. 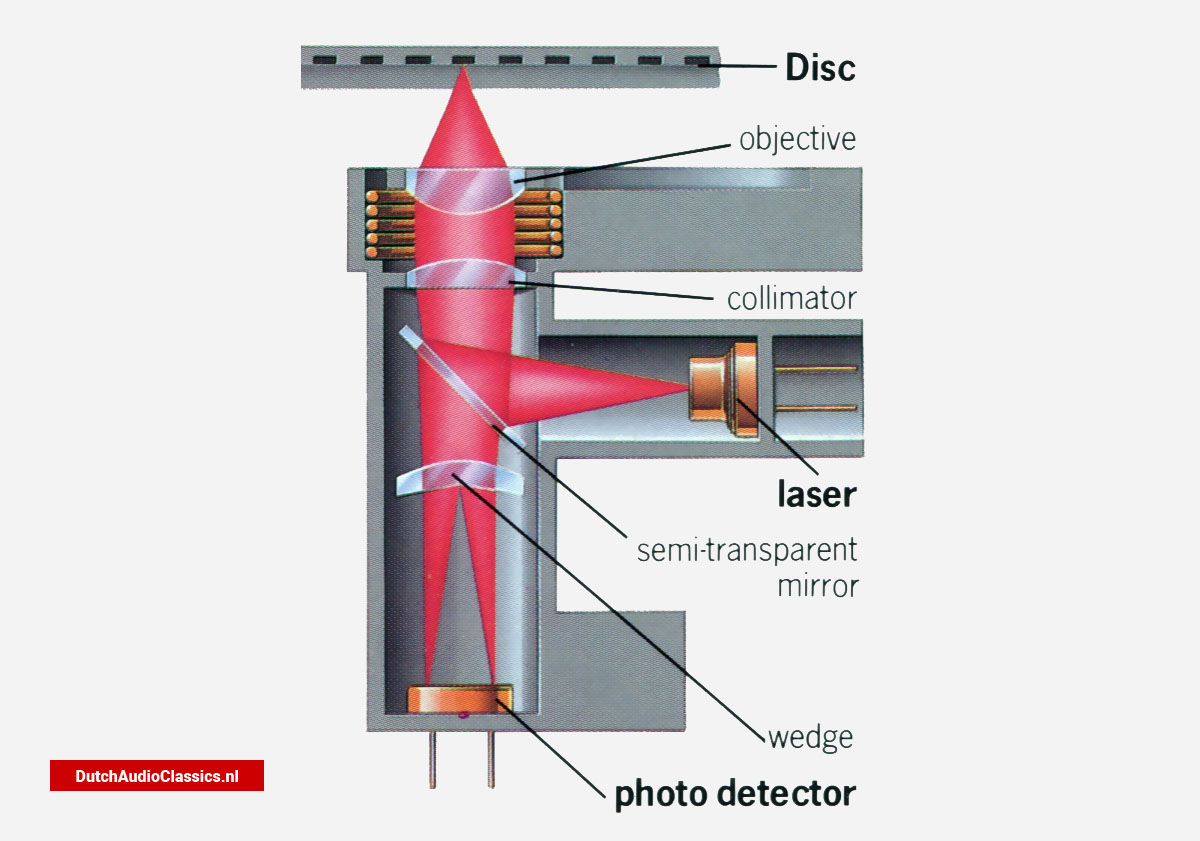 Laser light, on the other hand, is one-colour (single wavelength) light, and it has been made highly coherent. All the components of the beam are, as it were, marching in step. Because of this, laser light can be beamed, focussed and generally controlled with exceptional precision. The focus can be unbelievably sharp: a spot 50 times as fine as a human hair. What is more, it has no mass, and can be positioned and moved with tremendous accuracy at high speed.

As a result, lasers can produce super-sharp needles of light to write, and read, much more accurately than any existing mechanical or optical system. Lasers can measure the huge distances to stars, or the tiny movements caused by heat expansion, with uncanny accuracy. Lasers can analyse materials, cut out growths and tumours. Lasers are used to write the programmes into the master of the disc you use in your Compact Disc Digital Audio player. And Lasers read out the Compact Disc programmes with a clarity of resolution that no mechanical stylus could ever achieve - making their crucial contribution to the magnificent musical performance of the Compact Disc Digital Audio system.

Because they can bring such precision to such a variety of applications, lasers are definitely here to stay.

The Compact Disc laser is not one of the high-power ruby or gas units that have created the laser 'super weapon' image. It is a low-voltage, solid-state laser, radiating from a semiconductor crystal as small as a pinhead. The radiation is mono-chromatic infra-red. Strictly speaking, it is invisible, and not light at all. The beam is divergent, but it comes from a spot about one micron in diameter -less than one fiftieth of the thickness of this sheet of paper - and it can be focussed into a similar sized spot within the disc. The beam is perfectly harmless, because it is concentrated only on that focal point. In any case, the power re-quired is only a fraction of that needed to light a bicycle lamp - and it can only be switched on when the disc compartment is closed with a disc in position. In addition, like all Philips products, the Compact Disc player conforms to all the relevant national and international safety regulations; not just those existing, but also those anticipated. 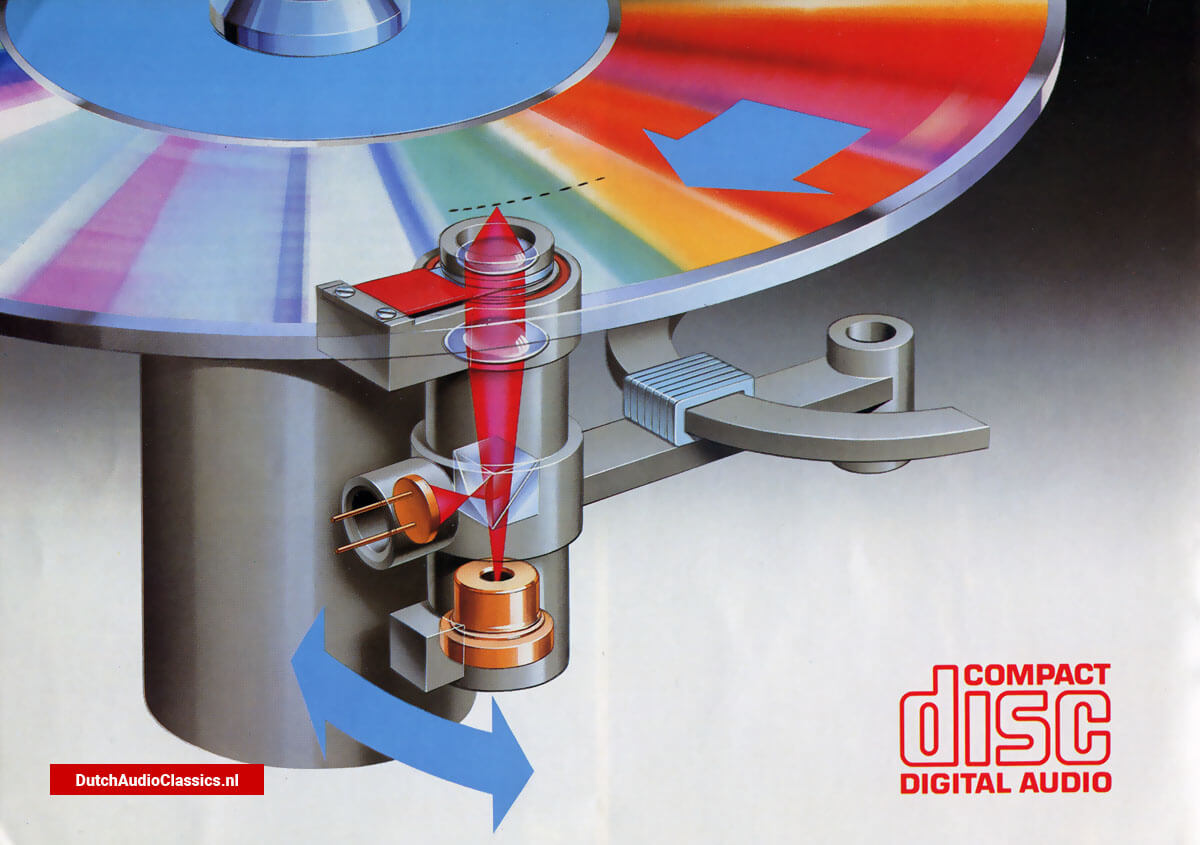 The CD Laser Beam Pick-up: one milliwatt of power is all that is needed by the tiny light beam. Yet it reads every last detail of the digital information on the disc.

The future of lasers

Lasers are, in fact, in the vanguard of a bigger, wider trend - the rapidly increasing use of optical science. There are other examples: optical fibres are replacing wire cables in telecommu-nications, video and data links because of their big advantages in speed, handling capacity and precision. As the quality of life rises, as new and undreamed-of facilities become available, optics - and not least lasers - will be playing a major role in life as a whole. A role that is beginning now, with the laser pick-up in your Compact Disc Digital Audio player.

After all, for the marriage of light and electronics - who else would you expect but Philips?