Back to the index
Ken Ishiwata, a key name behind the Marantz success story in Europe, talks to Ivor Hiunphreys oday's music is very much involved with electronics — very wide frequency bands, huge dynamics. With modern instruments you get a very dry, very fast bass, and you need a good transient response. With classical music, though, duration of power is needed as well — usually an orchestral recording is made in a big concert hall where low frequency energy hangs on in the air. And these two kinds of music require different kinds of behaviour in speakers, amplifiers and CD players.' Questionable thinking to some, common sense to others, but whatever your reaction there's no denying that Ken Ishiwata, a key figure in the hi-fl industry, has an impressive list of excellent products to his name. It is a catalogue of success he can trace back to his earliest years. 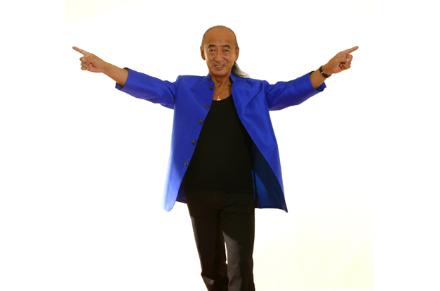 As a child he played the violin, and it was his passion for music that encouraged him to make his first amplifier at the tender age of 10. He lived near a US Navy base in Japan where local and forces families interacted socially. For Ishiwata this had the dual benefits of an early exposure to English and easy access to the components he needed for his hobby. Electronics at college was followed by an early career in merchant navy telecommunications.

But hi-fl beckoned. In the 1960s the fast-growing Japanese electronics industry was keen to find competent engineers who spoke English. Ishiwata joined Pioneer and came to Europe with the company in 1968. He moved to Marantz a decade later, initially working on loudspeaker design, but with the Compact Disc already in development he soon found his energies directed towards electronics.
His command of English proved invaluable in helping solve collaboration problems between Japanese and European designers, but significant cultural differences had to be addressed in Europe, too, not least in the German hi-fl market. 'Twenty years ago there really was a special German sound,' says Ishiwata. 'Today it's better because they have adapted. Many foreign products came into their market and their designers started to understand the merits of other systems. But the German public expect high build quality — Mercedes, BMW, that sort of approach. So, in Germany, it's not enough merely to have a good sound; you have to have good presentation and manufacture as well. That's where the difficulty lies for us — we have to come up with products that are suitable for both markets. In the UK, bulky equipment is not readily accepted, hence the Elegance series — PM17 and even CD17 are very elegant, very well made, very slim and accepted throughout Europe.'

Sound, The biggest problem in audio electronics is the movement of electrons. The electron is very fast, but on every single product you have to have a power supply to convert the mains AC to DC. For that you need a rectifier and reservoir capacitor, and inside a reservoir capacitor you no longer have electron movement — it's the ion, which is much slower. The problem is how to accelerate the speed of this ion inside an electrolytic capacitor. But the larger they are the greater their impedance at high frequencies. It depends how the capacitors have been made, but to increase the storage of a foil capacitor without increasing its physical size — which is often required, for example, in cheap amplifiers — you have to etch the aluminium to increase the surface area. But in doing that you also increase the impedance.

Is there an argument, then, for impedance-matching crossovers such as KEF has used in the past? 'Conjugate loading, yes, but the problem there is that you are adding additional components, making the circuit more complex. Every component has a character which influences the sound. So, again, it's a question of balance.

'What you really need is to design better drive units, but today, unfortunately, few speaker engineers develop transducers themselves — they rely on suppliers. They often end up having to use a complex crossover to balance out the driver characteristics. With properly designed drivers the crossover can be much simpler. But, again, you cannot look just at the frequency domain: you have to look into the time domain as well. You can have a beautiful frequency response, but when you feed in a transient signal you find problems in the time domain.'

It's very difficult to sell active speakers, but they do overcome a lot of problems. You can even use a digital crossover and correct for both time domain and amplitude errors.'
What about amplifier output circuits: Class A versus AB, MOSFETs versus bipolar, etc? 'In my opinion it's not the type of amplification that matters, but the way the current is drawn. Current demand changes according to the envelope of the music. The return path from the speaker comes back to the amplifier's ground, which is supposed to be at zero potential, with zero impedance. But it isn't — it's moving. That influences the sound more than the topology of the output circuit, and is what can give a certain harshness in uppermidrange and high frequencies with Class AB amplifiers. In Class A the current drawn from the power supply is always constant; there is no variation at all and the ground is stable. That's attractive in terms of sound quality, but unattractive in terms of efficiency.'

type of output devices employed? 'The static characteristics of MOSFETs are much closer to triode tubes, so many people say they sound sweeter, but in my opinion if you do it properly you can make a sweeter sound with bipolar devices.' So the ideal would be a bipolar Class A amplifier. 'Yes, but unfortunately such a wide dynamic range is required today that it's crazy to have such a high-power Class A amplifier. I would design a Class AB circuit, but control the current flow in the amplifier so that its influence on the sound is minimal.'

What about digital audio? Conventional wisdom says that a frequency bandwidth of 20k1-Iz is enough and, therefore, according to established sampling theory, CD's 44.1IcHz sampling rate is adequate. But as we go to sampling rates of 961cHz and above we seem to perceive an improvement in sound. Is this to do with the harmonic structure of the signal? 'No. I think the 20kHz upper limit is probably enough. However, taking 44.1kHz as a sampling frequency means that any signal above 20k1-lz has to be completely removed before it is recorded. Unfortunately, to do this you need a very sharp filter which inevitably has a so-called group delay problem. The frequency response may be flat, but the time domain characteristics are changing from as low as lIcHz. I think that's the problem. Taking the sampling rate up to 96kHz will help because you can then have a much smoother filter with no group delay problems below 20kHz. I have tried sampling at up to about 5001cHz and, surprisingly, you can still hear the difference.'

You mentioned capacitors earlier. What do you think about the 'sound' of passive components in general? 'Every single component, passive or active, has a character. In every product you're going to have hundreds of components so, again, balancing the circuit becomes essential. Many people have tried to copy what I do, to use certain capacitors or whatever. But the performance comes not just because I use a specific high quality capacitor; it's in the overall balancing. I use different kinds of component in different circuits. It's not simple; you've got to really listen, to understand music and its harmony. To love music is the important thing.'