This top-of-the-line machine looks quite unlike its predecessors and marks a new departure in design from Philips. The hard, shiny black appearance of earlier models is now supplanted by a softer, greyer, satin look achieved using very fine textured enamel. Curved edges characterise the appearance — even the central disc drawer and display are gently rounded. The lower part of the front panel has been tilted back while the central section is angled forward and carries a line of buttons. Steel is used for the casing and the relatively light chassis, the structure damped by visco-elastic laminations on the cover, and by judiciously placed foam rubber pads located between the casing parts. The CD950 is a key component in the new 900 series which includes the digital active input ioudspeaker and of course the '900 DCC deck [HFN/RR September]. All these machines carry a degree of system intelligence and their own remote control systems can be selectively shut down, with overall control transferred to a master unit.

Separate, wired remote control links are used between the units of the source of digital data the CD950 offers SPDIF signals in both optical (Toslink) and a wired (phono) formats. The unit is built at the company's Hasselt plant in Belgium. The CD950's facilities include a headphone socket with individual level control (also under the action of the main volume control).

Comprehensive commands are available on the remote control handset, the latter a slim sculpted design. Unfortunately, its odd weighting causes it to slide out of the hand, while the span required to cover the full height of the array of buttons is too great for convenient one-hand operation. A ten-key array allows for rapid track programming (not on the 950 fascia) and the player design includes the FTS feature for the custom programming of preferred track selections on a library of discs. Shuffle play is possible plus a variety of programmed repeat modes — including the chosen phrase mode, oint ' A' to point ' B' repeat.

A large fluorescent dot matrix displays total time, time remaining and track time. Both track numbers and the total number of tracks are shown while harmonics indicate various operating states, errors and FTS commands ( but not alphanumeric FTS titles). The display may be switched off if required; no intermediate steps are present.

This player incorporates a remote volume control working in the digital domain. Thirty-one steps are provided, the first 25 in 1 dB increments. Previous controls have operated in the analogue sections of Philips players. Covering a 32.5dB range overall, this is a most useful facility with very good resolution. Unfortunately the display gives only a crude representation of the volume state and action, and only after some experimentation was it found that the most momentary depression of the volume button is required for a ldB step — a fraction longer and any value is possible, whereupon the display changes to give some limited help concerning that setting. In normal operating mode the last setting of the volume control is memorised when the player is switched off.

Dubbing of CD onto cassette is enhanced with the matching cassette deck, when the synchronous recording and autospace functions become operational, but not otherwise. Physically this is a full size unit, with a captive mains cable. A twocore double-insulated design, the 950 has an input filter to block radio frequency radiation down the cable. Rear panel facilities include the single audio outputs. Two phonosockets are present for the ES! (Enhanced System Intelligence) control link. Its scope includes automatic resetting of volume at maximum for dubbing to cassette; a rear panel switch selects from ESI control on the handset supplied.

New technology is evident in the design of this player, not least the first exposition of the much discussed DAC7 chip from Philips. DAC7 in fact refers to chip number TDA1547, which contains four high speed onebit D/A converters designed to operate from a Philips 7350 third-order noise- shaping chip in a low-noise differential mode. The DAC elements present in the 7350 have been passed over in favour of the superior elements of the ' 1547 chip. The latter allows the use of selected analogue output buffers: in this case, dual 5532 ICs, one per channel. In a change from the usual practice of feeding the 7350 from another Philips chip (cg a 7323) for its digital filter function, the 7323 has been supplanted by a Japanese NPC filter which includes the remote volume control function in its digital processing section. Digital data for the S/PDIF terminal is processed by the PCF3523, the master crystal placed locally for good synchronisation.

Previous Philips players have used the long established CDM4 swing arm transport, which will remain in production, whereas the ' 950 leads by using the latest CDM9 miniaturized swing arm unit. This has a new, high definition optical path incorporating a diffraction grating as a beam splitter and providing lower losses than the usual optical paths, with the advantage of lower moving mass. It promises improved playability. A new elastomeric suspension effectively combines the functions of the old coil spring and rubber insert unit, with substantial improvements in shock and vibration resistance. CDM4 ased a spring arm disc clamp which added friction and noise to the hub; CDM9 has a high grip magnetic clamp, with a low mass clamp discallowing improvement of the servo characteristics and faster access times. These were realised on test.

An open layout has been adopted for the large double- sided printed circuit board and most parts are readily accessible. A fair proportion of surface mount chips and components are presented on the underside.

A compatible system was assembled which included the EPOS ES11 speakers, bi-wired with Cyrus cable to a choice of amplifiers including a Musical Fidelity B2 and Rotel RA820BX4. Comparison players included the Arcam Alpha and the Marantz CD52SE. Additional tests used a high-end system to stretch the assessment limits.

On test the ' 950 was found to have a distinctive sound. There was a high definition feel to it, a certain crispness and sharpness. Fine details were resolved well, both at low and high levels, and the player showed a high degree of clarity which distinguishes it significantly from earler nonDAC7 Philips BitStream models.

In the treble there was an extra incisiveness which drew one's attention at times, while a trace of 'zing' and ' sheen' was present, underlying the generally well defined replay. For example, vocal sibilants were clean and well controlled, while a fine degree of focus was evident throughout the treble.

If judged to be on the lean side of tonal neutrality, the midrange remained rewarding for its very good focus and confident articulation. Vocals were presented well — there was also a good feeling of clarity here.

Rated 'good plus', the bass was almost as articulate as the midrange and demonstrated good extension as well as dynamics, the sound free from boom or softness. Reproduced stereo sound stages were very good for this class of player, with fine focus, width and depth. The image sounded spacious and open.

Since it represents a new transport with digital system applications, the '950 was assessed with the help of a Micromega Duo BS decoder. Here the result was disappointing as the S/PDIF data did not sound as focused, as rhythmic, or detailed as the output from the long-established technology as seen in the Alpha. With the Duo capable of 27 or so with this class of transport, the subjective score was judged to have fallen to 23 with the ' 950 as a source.

While Philips has chosen a higherorder digital filter for the 950, it is not as high as that used in the equivalent models from Japan. Some ripple was still evident in the high resolution frequency response even if it is very mild, ± 0.06dB. Channel balance was excellent, and very good figures were obtained for channel separation, nearing 120dB mid-band and held at 112dB by the 20kHz upper frequency limit. No interchannel phase difference was present while the output was absolute phase correct.

For Philips, the output impedance for the '950 was lower than usual at 200ohms, helpful for passive control arrangements, while the audio output was slightly high at 2.1V, up 0.42dB on the reference level.

Distortion at full level was fine, measuring — 89dB at full level lkHz though the technology may be coaxed into a better result if required. The 20kHz distortion result was a good one, and indicated that very low in-band noise products result from this high frequency signal.

Good agreement was seen in the high frequency intermodulation performance, the difference tone for the full level 19 and 20kHz tone was a full — 110dB down, well matched between channels. A fine —100dB figure was also noted at the lower modulation level. Tests also revealed some up- band products let through by the digital filter, while the rising noise with frequency was a func:ion of the high-order noise shaping involved.

By — 70dB modulation ( record level) at lkHz, the linearity was seen as very good with distortion products vanishing into noise at — 50dB down, je —120dB relative to full level. The perfect spectral result is not worth displaying! With the measurement bandwidth extended to 100kHz a spray of 88kHz related spuriae were noted at — 65dB which was higher than expected. Radio frequency spectrum analysis to 250MHz showed that very little other noise was present, under 0.5mV.

Very good signal to noise ratios were measured, 114dB unweighted and 117dB COR ( 1kHz) ARM weighted, the latter a good indication of complete inaudibility. Deemphasis error was also very low with this deck. With its new transport carrying the low inertia laser head, the shock and vibration resistance rated excellent, a notable advance. DAC7 promises very good linearity particularly at low levels, and we were not disappointed. Level errors at — 90dB modulation were very mild at — 0.3dB left and — 1.0dB right, while the overall trend was for error spanning the range from — 60dB to — 120dB modulation. Including system noise, the error did not exceed 2dB even at — 115dB modulation.

A spectrum analysis of the — 90dB tone showed only mild noise down at 120dB with no detectable distortion harmonics. A most respectable sinewave could be reproduced with the aid of the usual time averaging which allows dither to perform its linearising magic. No premature limiting was seen with peak level white noise, while the error correction on the new transport was sufficient for data gaps of 1.5mm, an average performance and poorer than for earlier Philips players.

This new generation CD player demonstrated the technical performance of Philips own top of the line digital to analogue conversion system. It had a distinctive sound character, with a crisper, clearer and more open character than the previous BitStream implementations. This may well prove attractive and, in any event, the '950 player performed pretty well overall.

A minor disappointment was the reduced gap error protection, down to 1.5mm from the usual 2.5 to 3mm, though the test figure was still a good result. However, the lab performance was very good in other areas, and the new transport provided very fast track access — now in the Sony class. As regards features, the importance of the dual format digital data output should not be neglected, nor should the system intelligent control relating to matching Philips components. The high resolution digital volume control is also a worthwhile feature.

Whilst I would have hoped for a clearer demonstration of sound quality improvement, the overall performance and facilities do make the CD950 worth considering. But given its particular character, audition is advised prior to purchase. 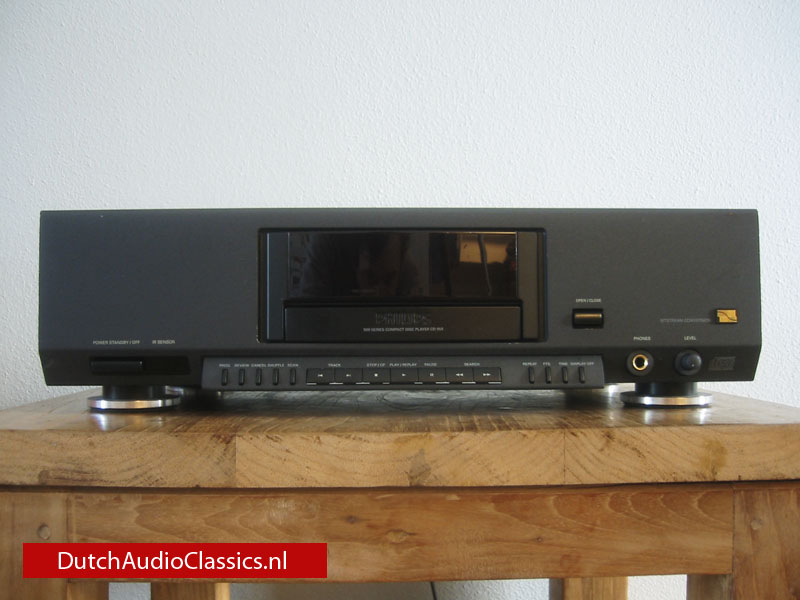 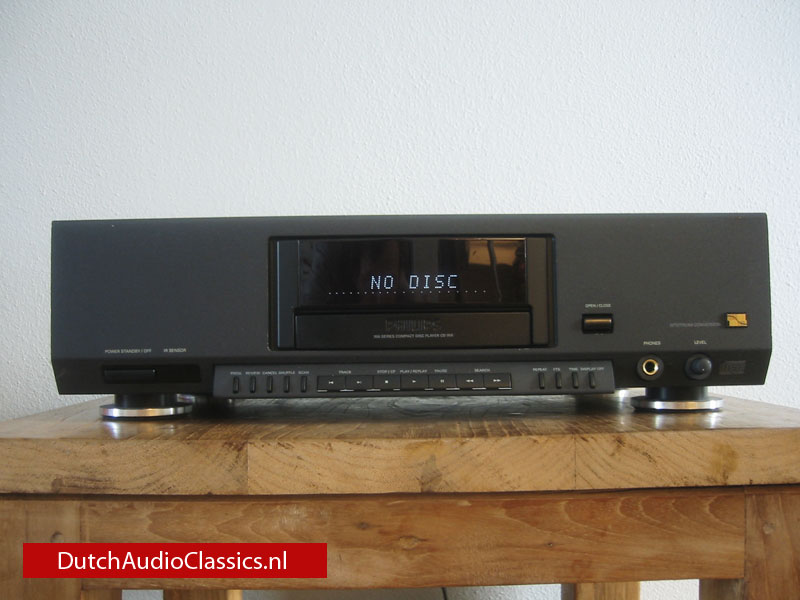 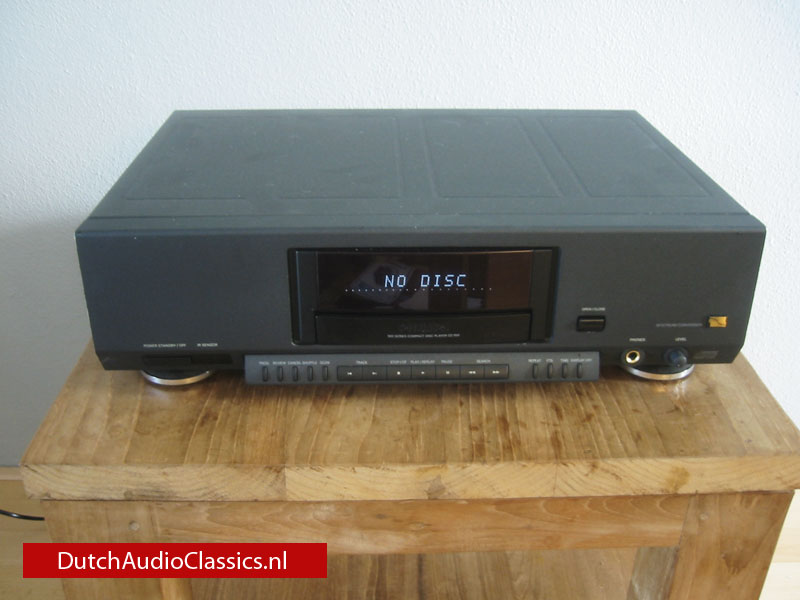 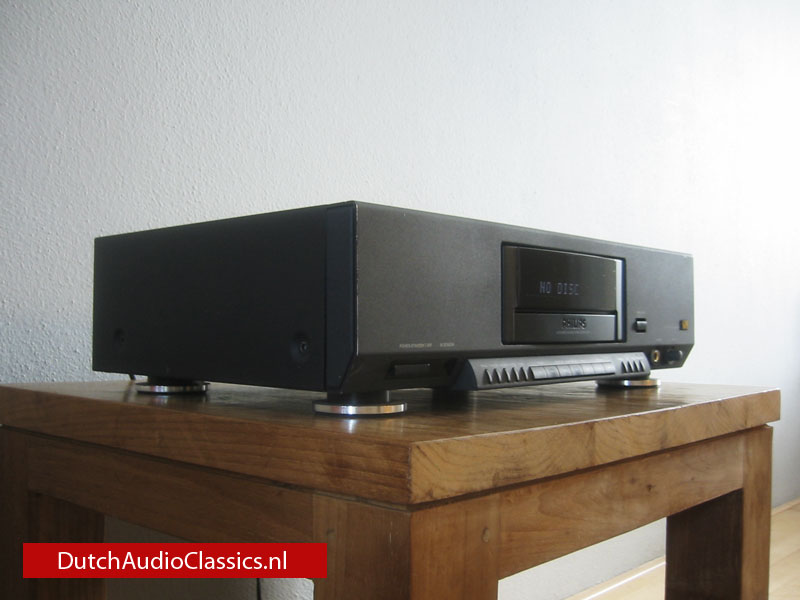 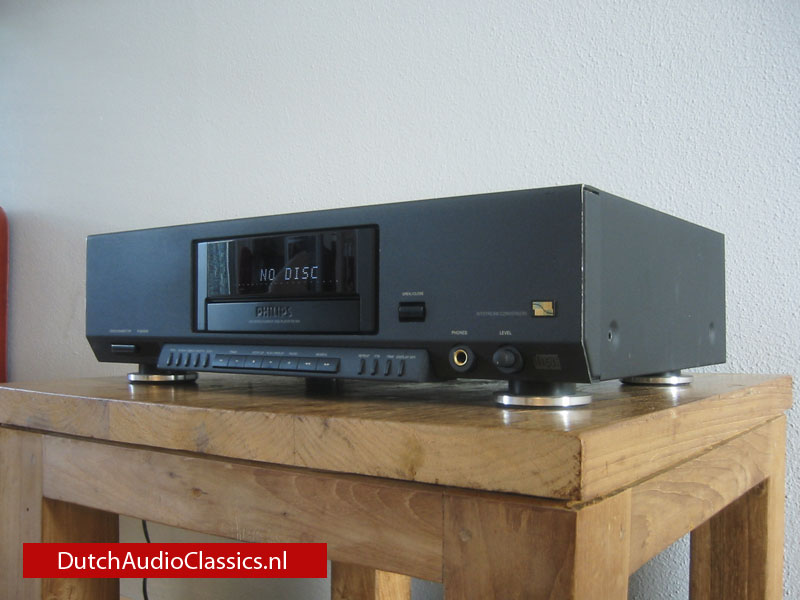 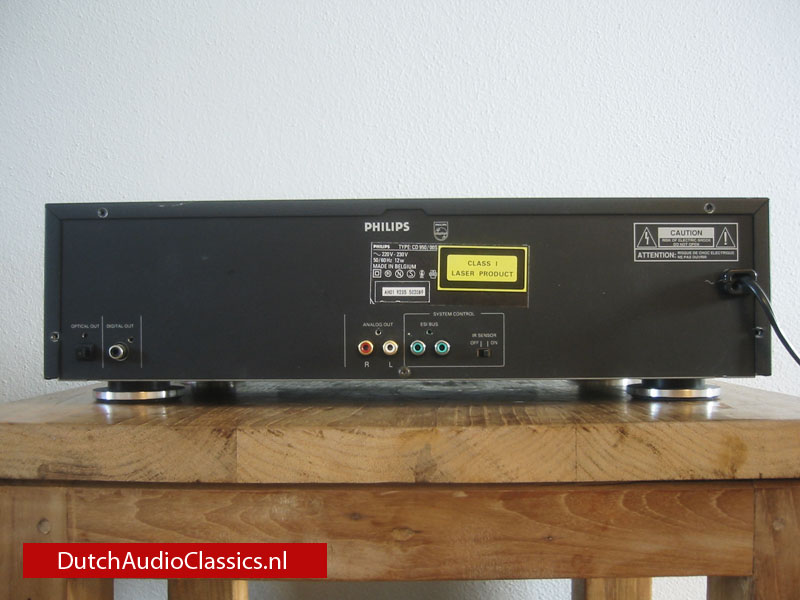 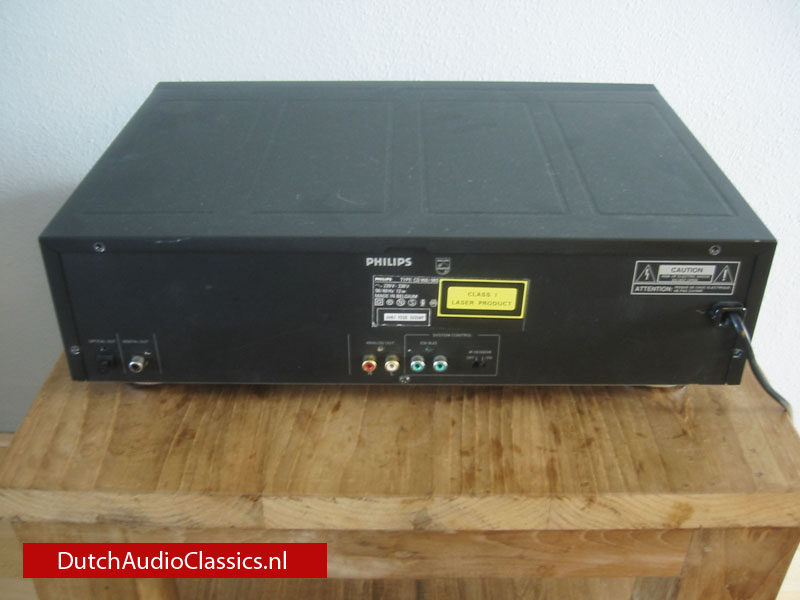 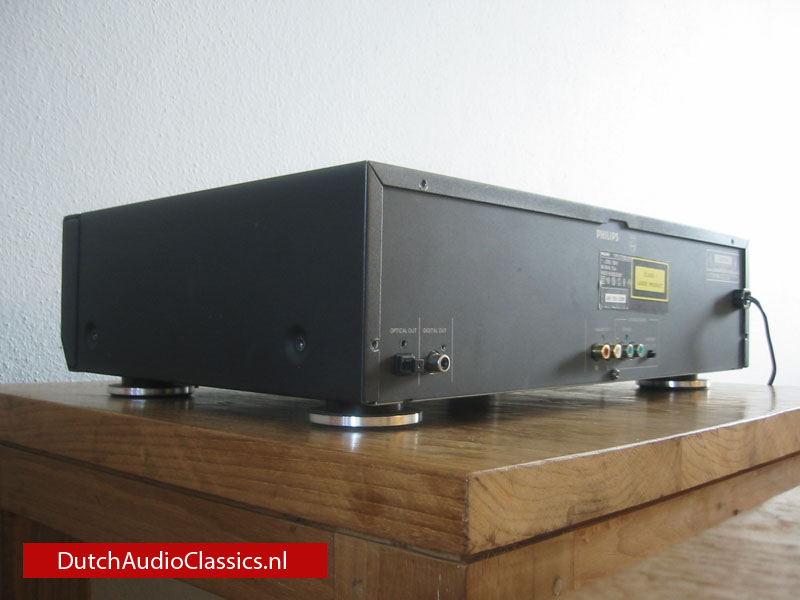 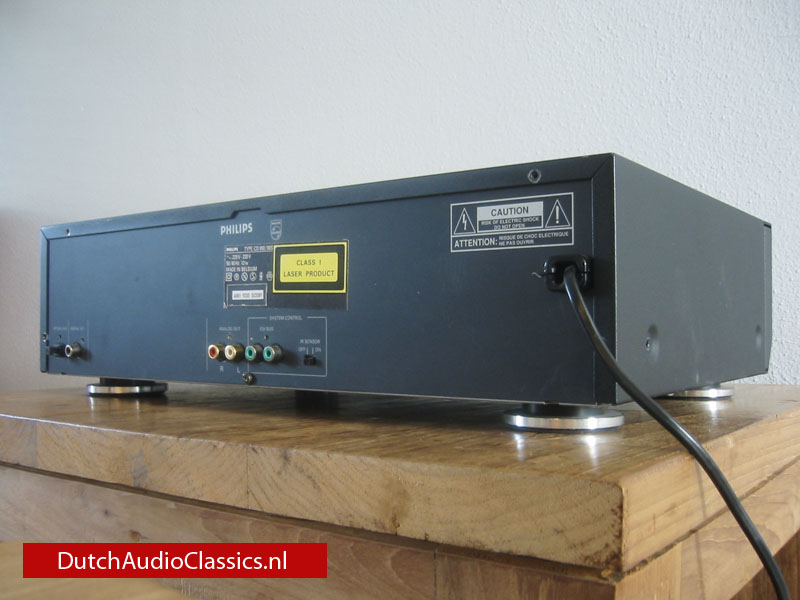 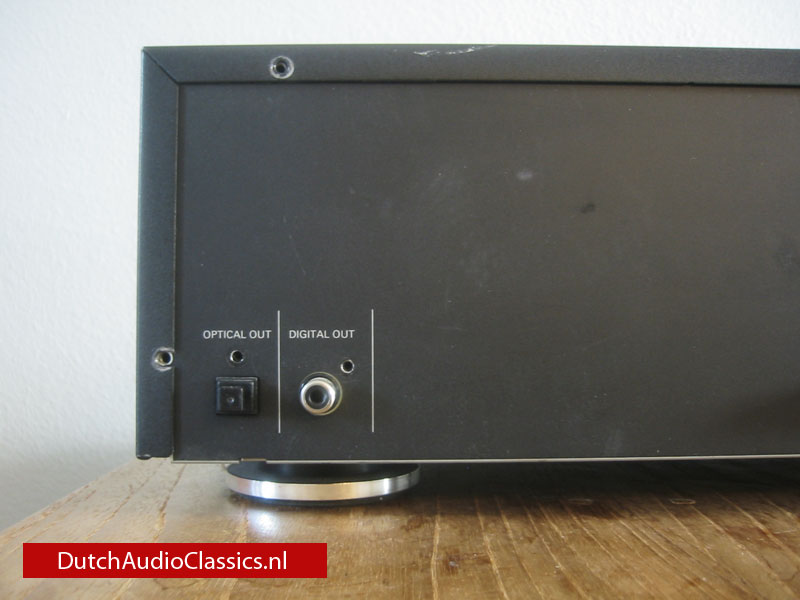 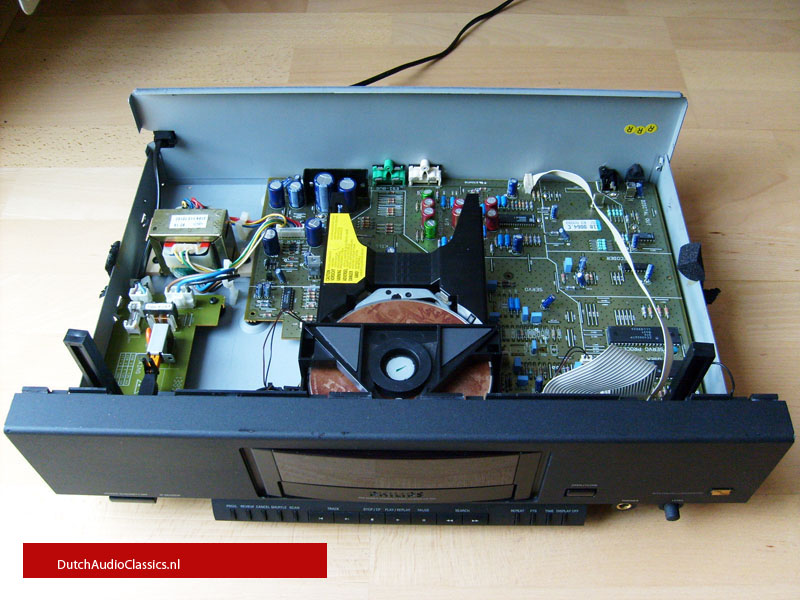 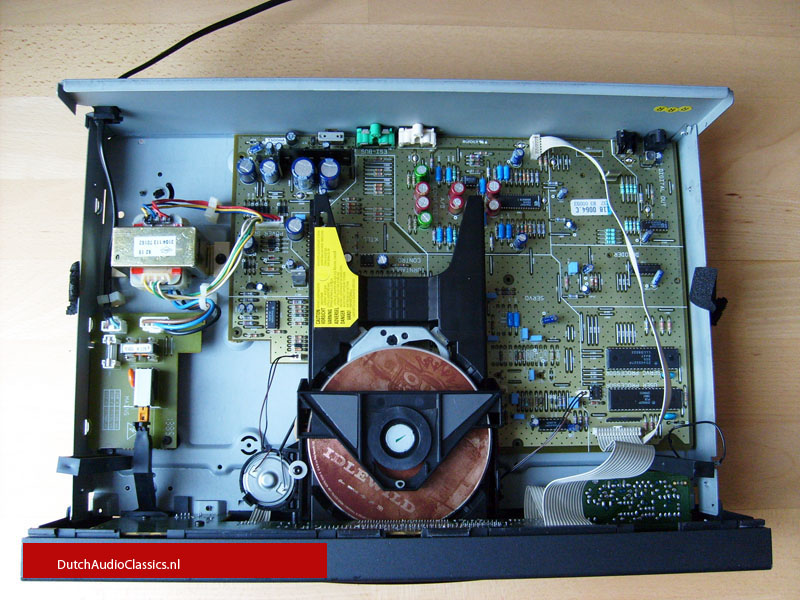 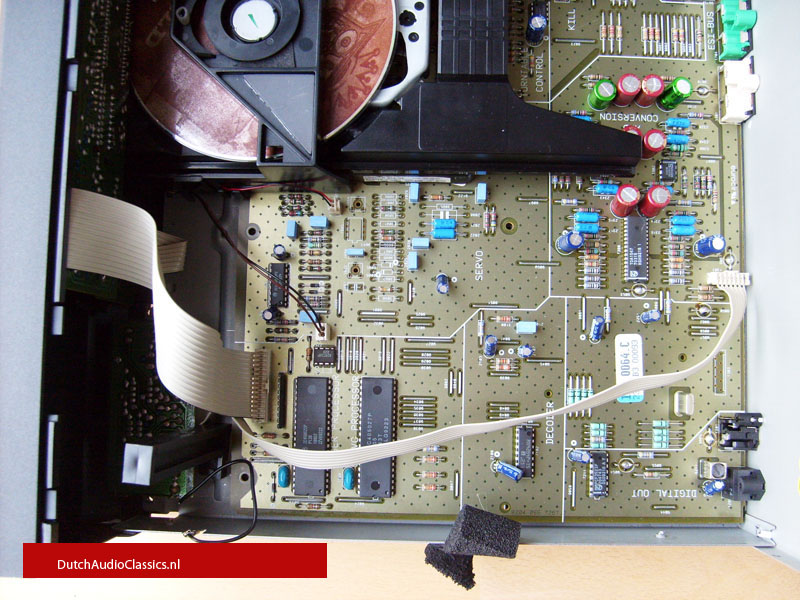 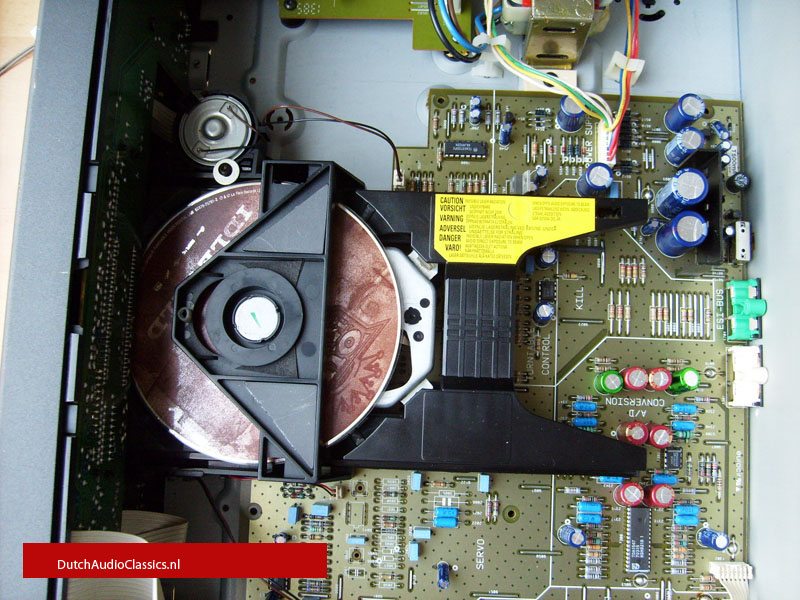 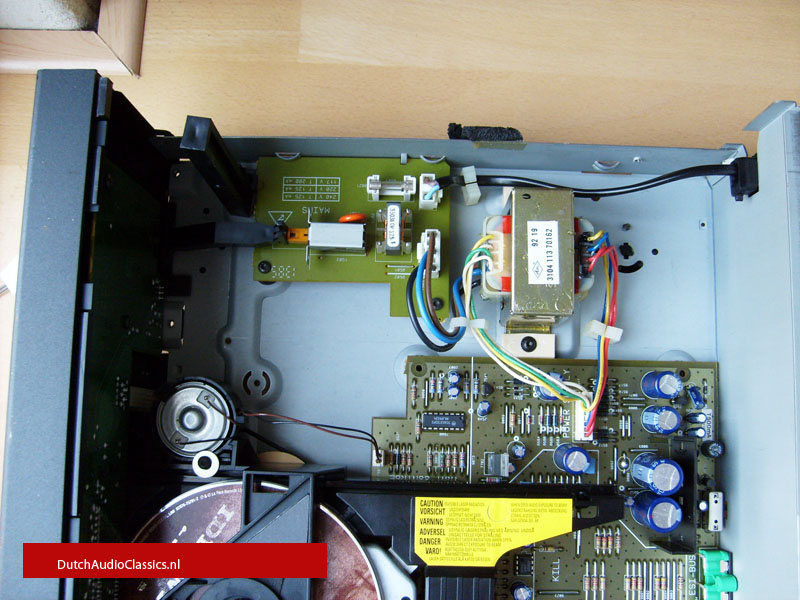 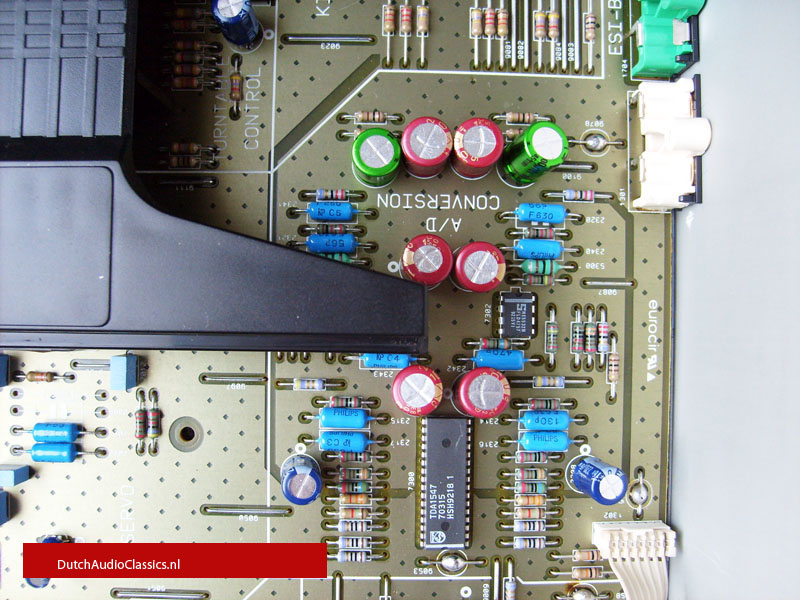 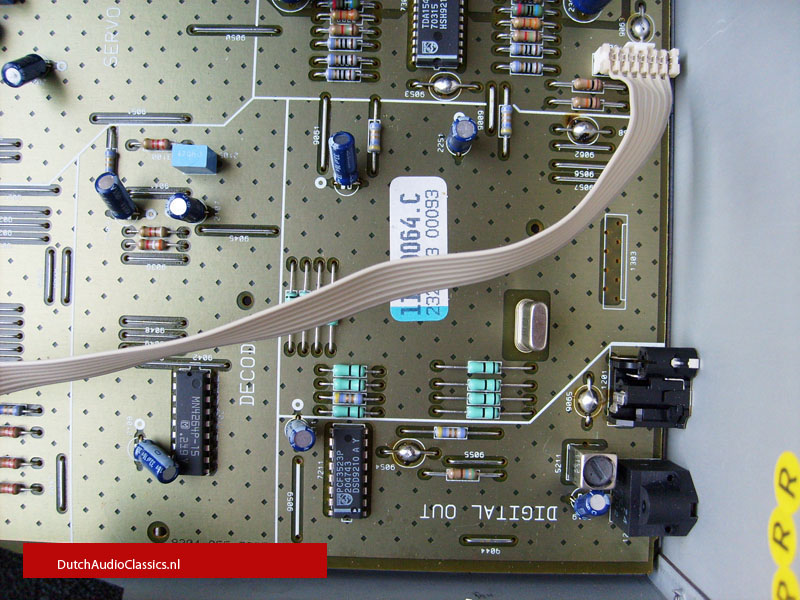 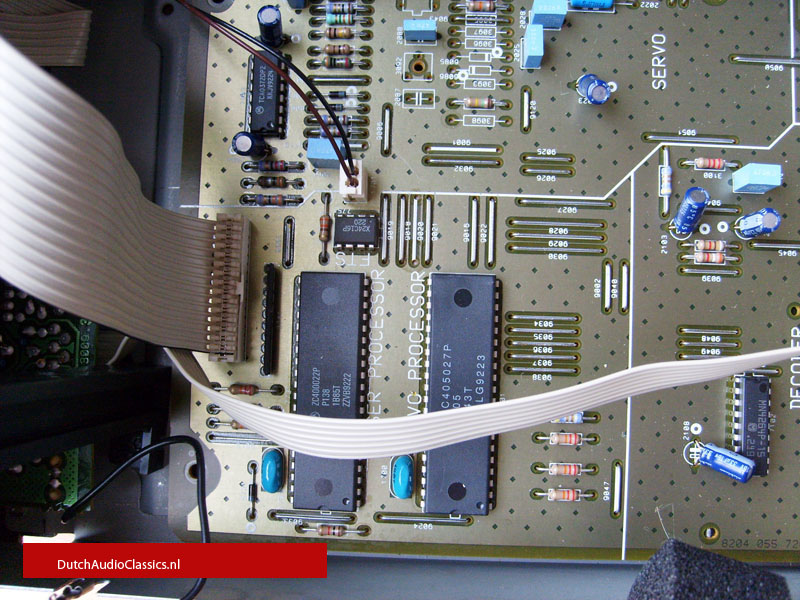 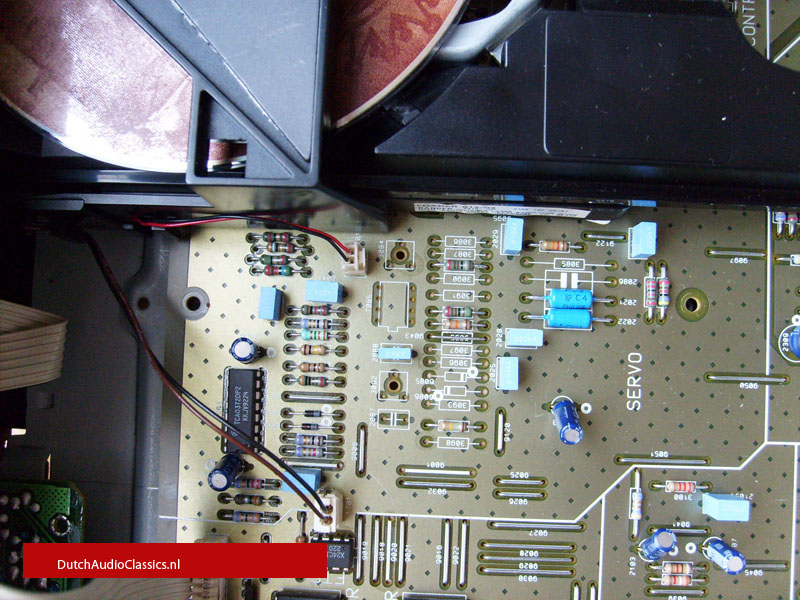 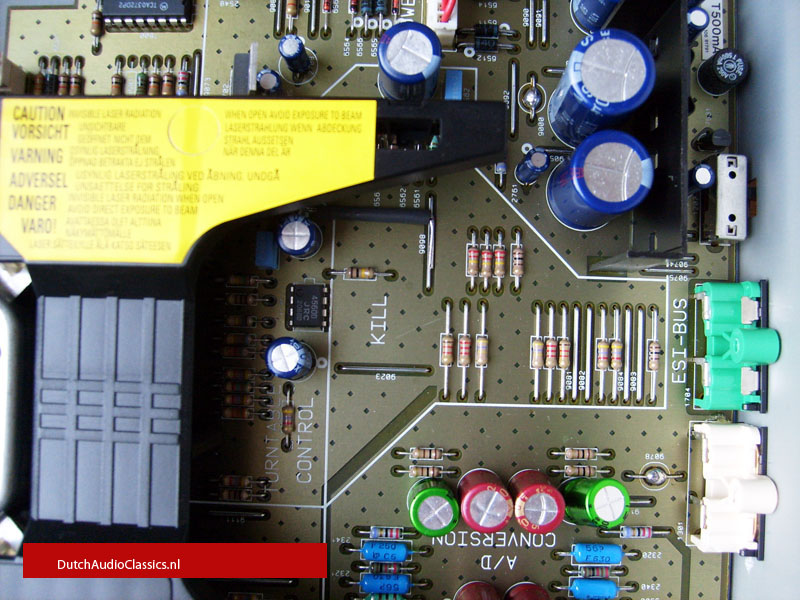 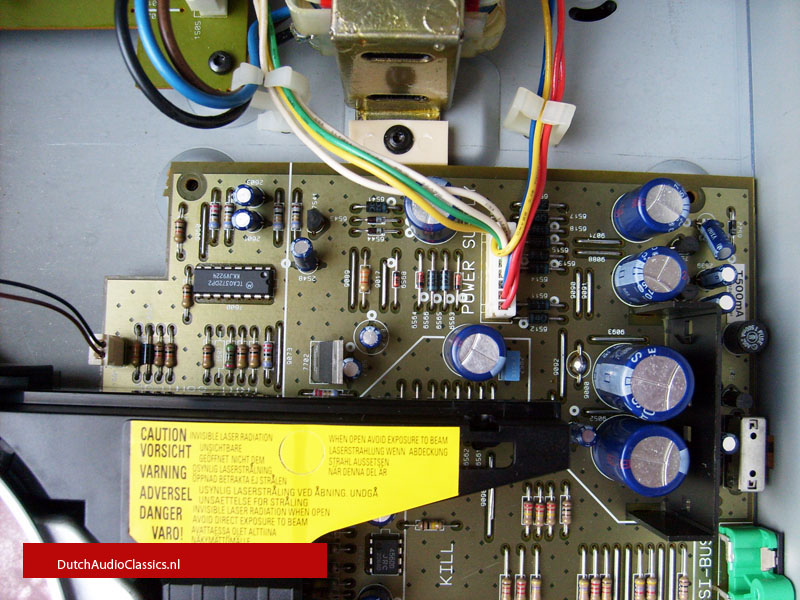 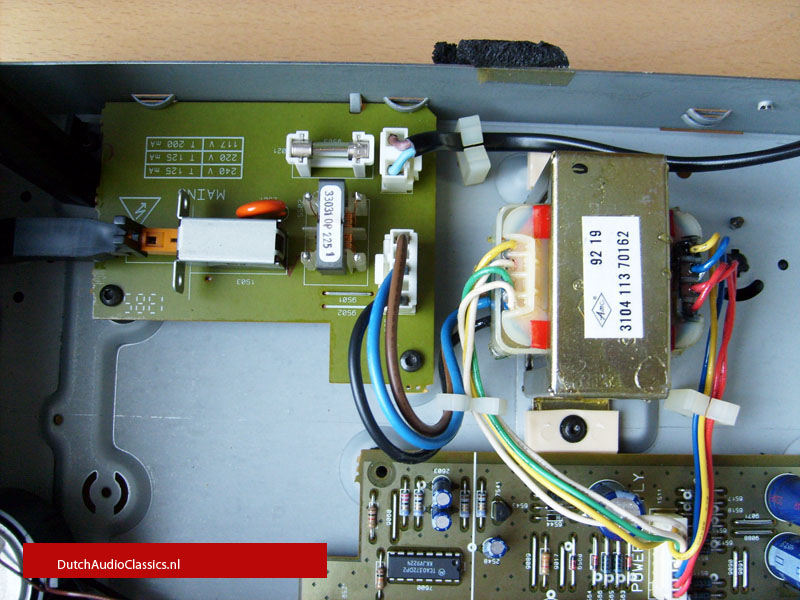 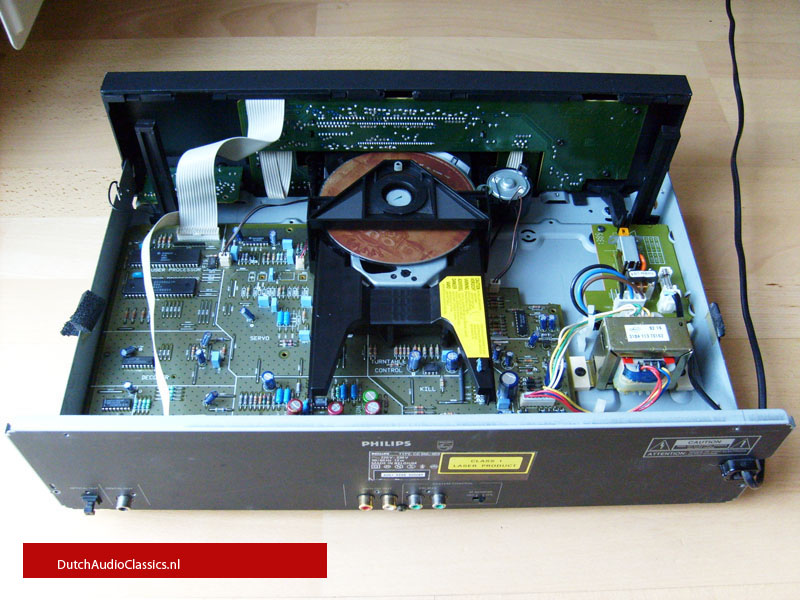 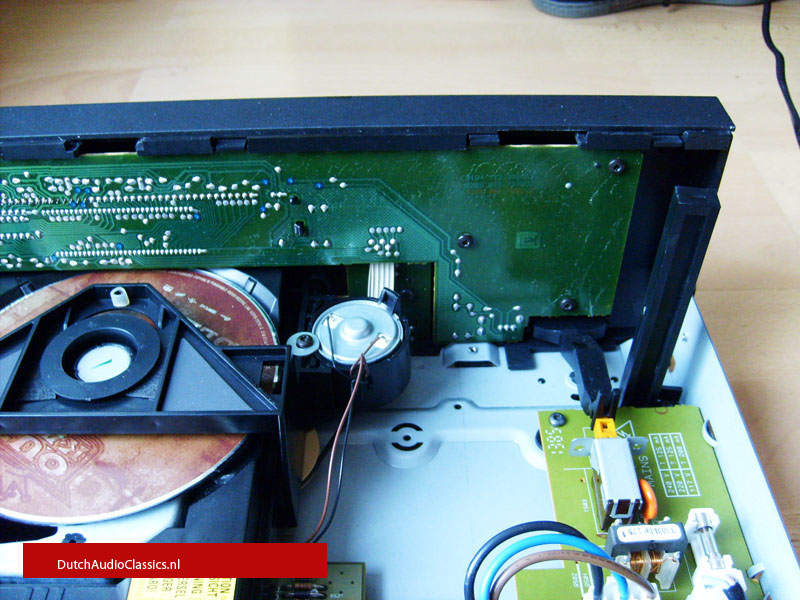 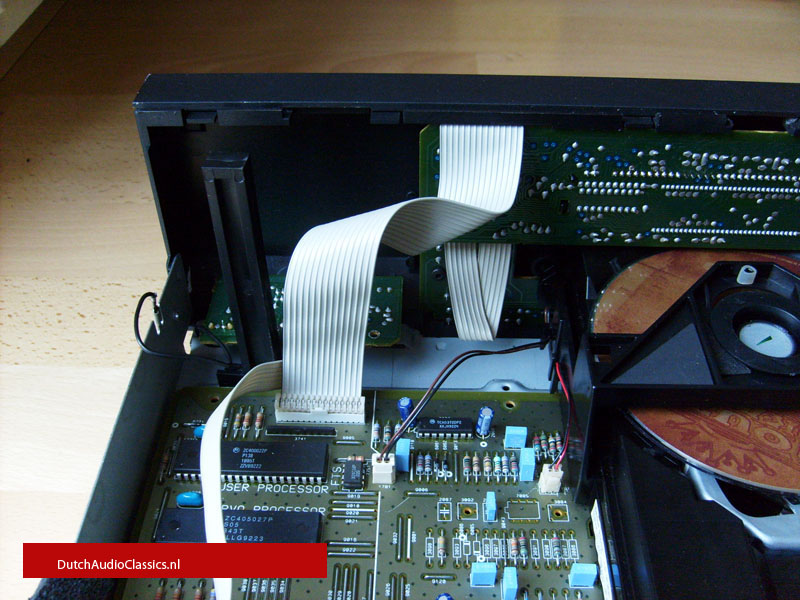