Since launching the first CD player almost ten years ago, Philips, as the CD originator has provided a number of technologies. The Philips LHH1000 is Philips' commitment to original sound reproduction and the development of the CD. This is due to the rich musicality nurtured in the European cultural sphere and the love of music that has been developed through the production of numerous software titles. 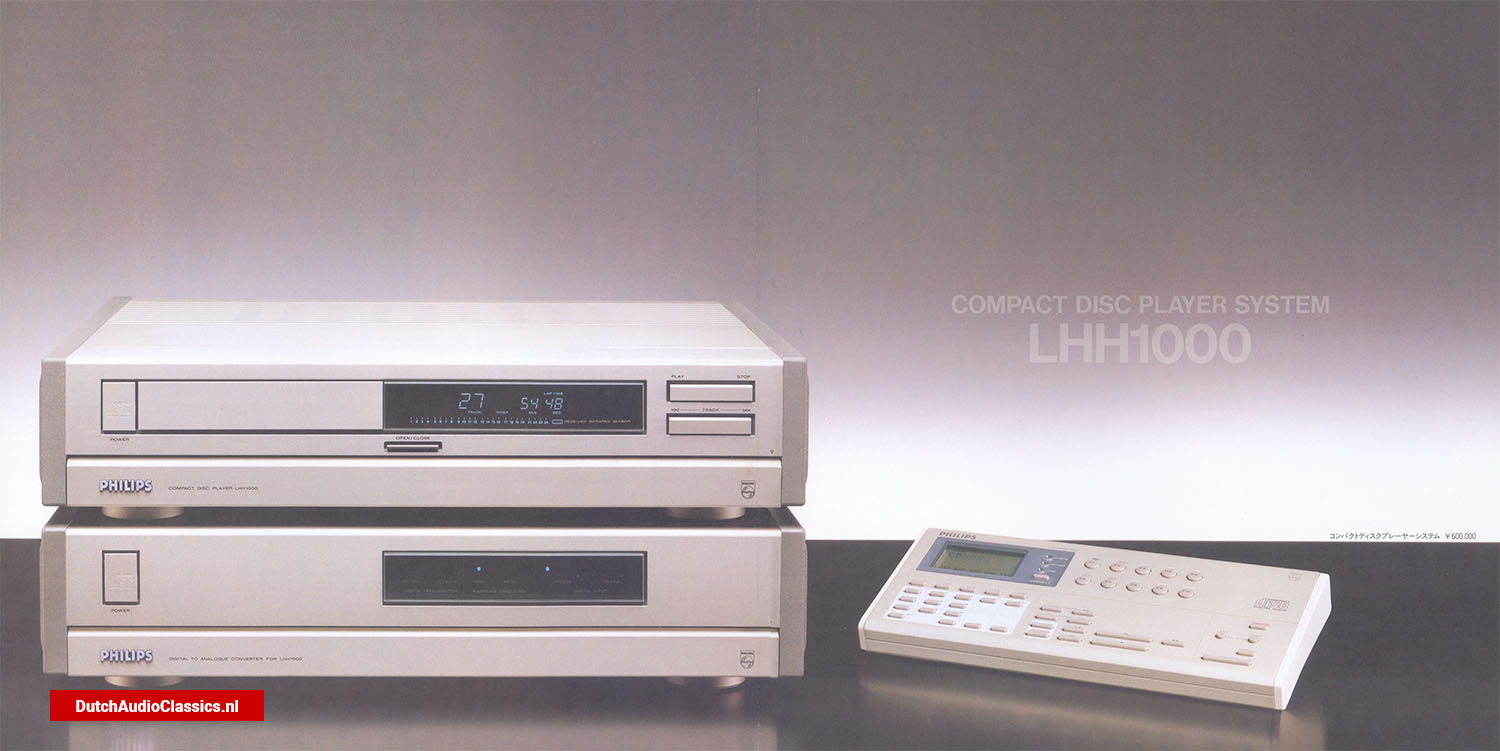 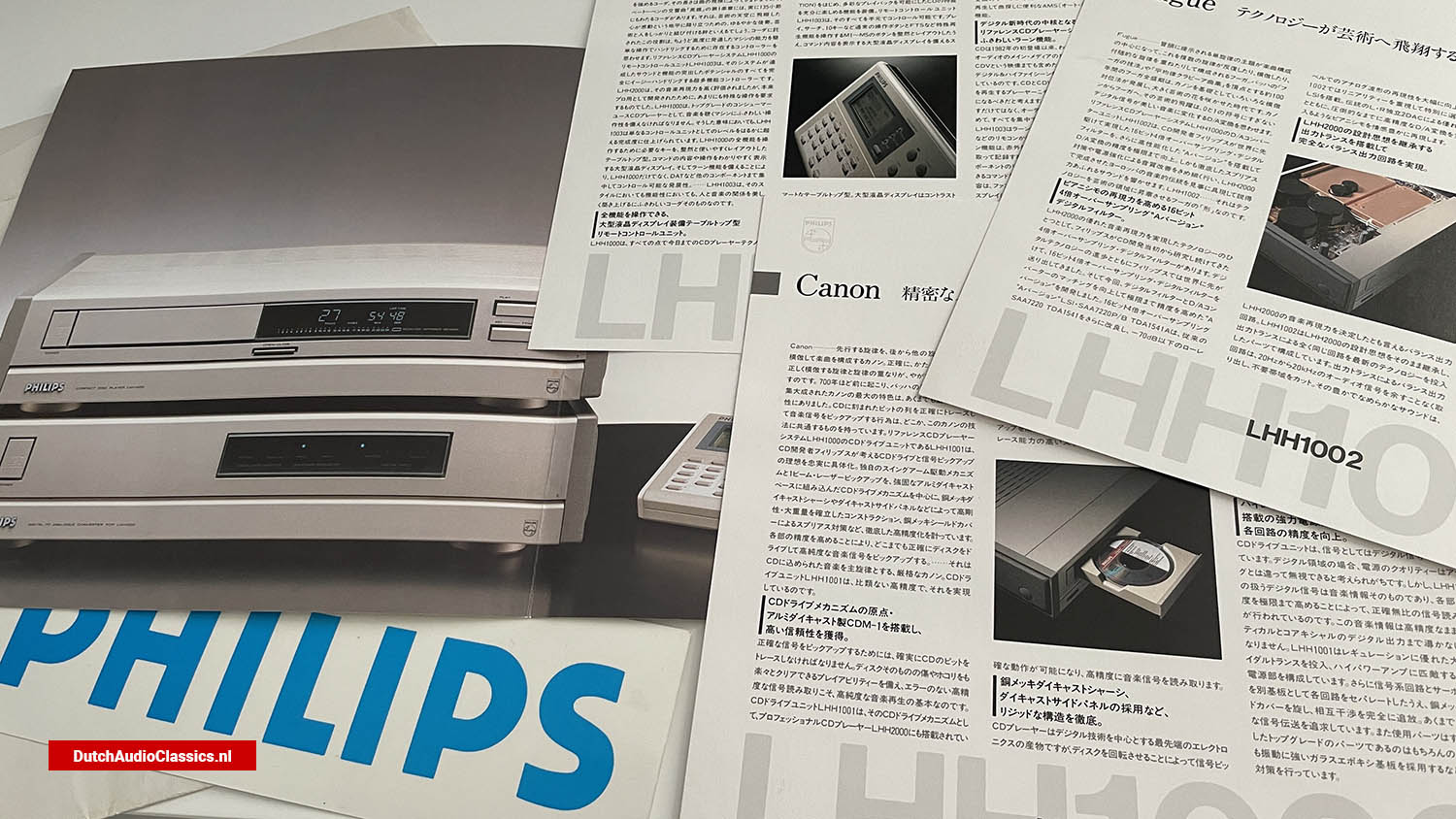 A canon in which the preceding travel melody is strictly imitated by the other melodies that follow. The canon consists of a piece of music in which the preceding travelling melody is rigorously imitated by the other melodies that follow. The most distinctive feature of the canon, which originated some 700 years ago and culminated in Bach's instrumental music, was its strict regularity. The act of picking up the music signal by precisely tracing the rows of pits engraved on the CD has something in common with this canon technique. 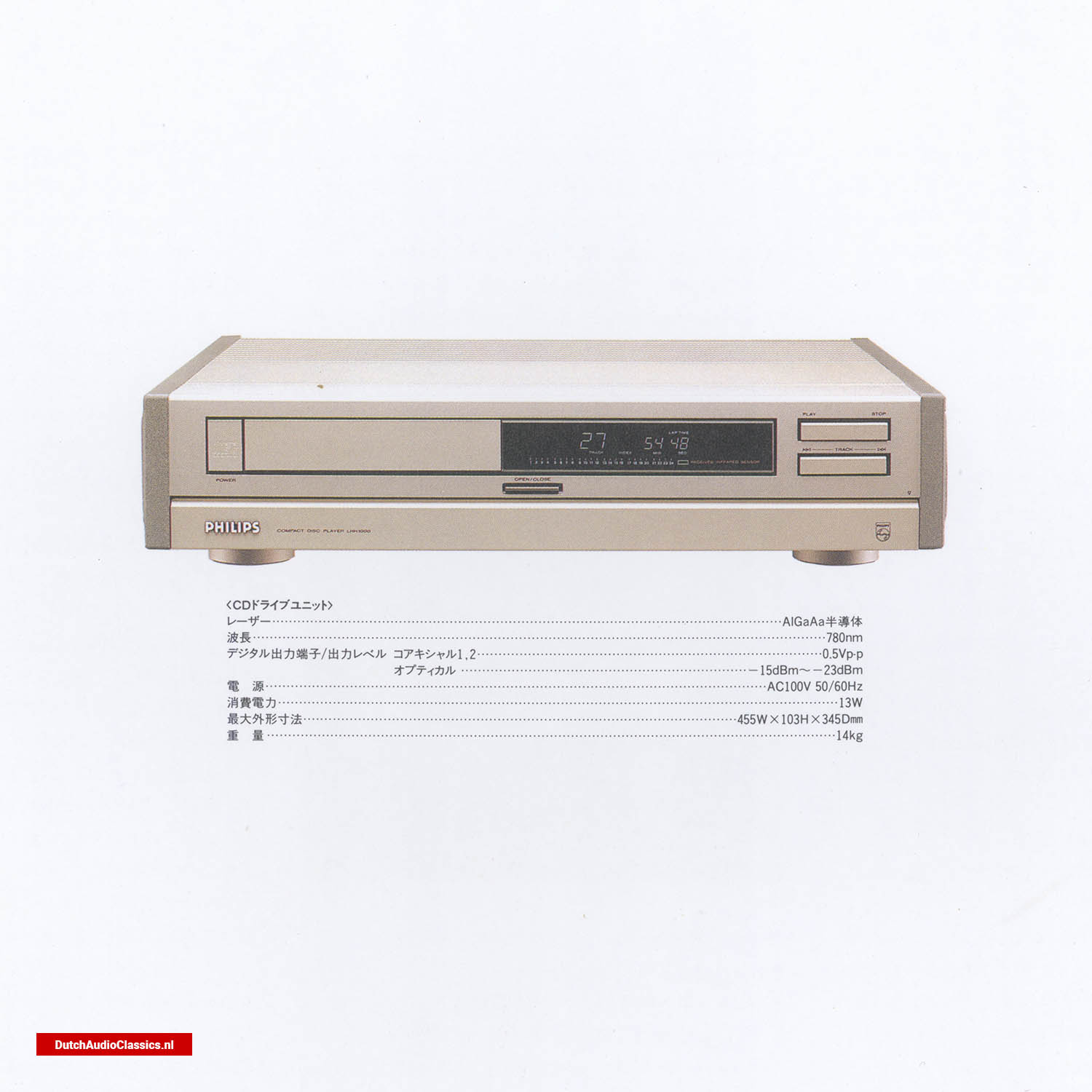 By enhancing the precision of each part, the disc is driven with precision to any extent and picks up high-purity music signals. The Philips LHH1001 CD drive unit achieves this with unparalleled precision.

The Philips LHH1001 CD drive is equipped with the Philips CDM-1, the origin of CD drive mechanisms and made of die-cast aluminium, achieving a high level of reliability.

To pick up accurate signals, the CD pits must be traced reliably. The playability of the disc itself can easily clear scratches and dust, and error-free, high-precision signal reading is the basis of high-purity music reproduction.

The CD drive unit Philips LHH1001 uses as its CD drive mechanism the Philips CDM-1, which is also used in the professional CD player Philips LHH2000. The Philips CDM-1 is constructed entirely from die-cast aluminium, including the mechanism chassis. The Philips CDM-1 is a CD drive mechanism that fully exploits the superior tracing ability of the Philips swing-arm big-up. The strong die-cast aluminium unit eliminates external vibrations, and when open, the spindle motor rotational vibrations are also powerfully activated, freeing the pickups from the effects of various vibrations. The swing-arm pick-up, with its excellent dynamic balance and high intrinsic tracing ability, enables even more precise operation and highly accurate reading of the music signal.

The Philips LHIH1001 drive unit is a rigid structure with a copper-plated die-cast chassis and die-cast side panels, which supports the CD drive mechanism CDM-1 with high rigidity.

The Philips LHH1001 is equipped with a large toroidal transformer with excellent regulation and a powerful power supply section comparable to that of a high-power amplifier. In addition, the signal and circuitry circuits are separated by separate circuit boards, and pot-plated shield covers are used to completely eliminate mutual interference. High-precision signal transmission is pursued to the highest degree. In addition, all parts used are carefully selected top-grade parts, and thorough measures are taken, such as the use of vibration-resistant glass-epoxy substrates.

A fugue is a piece of music in which the monotone theme presented at the beginning of the piece is the centre of the composition, and multiple melodies are repeated, crossed out or overlaid with incidental melodies. The heyday of the fugue, which lasted about 100 years and culminated in Bach's 'Technique des Fugues' and 'Mean Clappier', was marked by the development of a variety of imitations and counterpoints based on the canon. 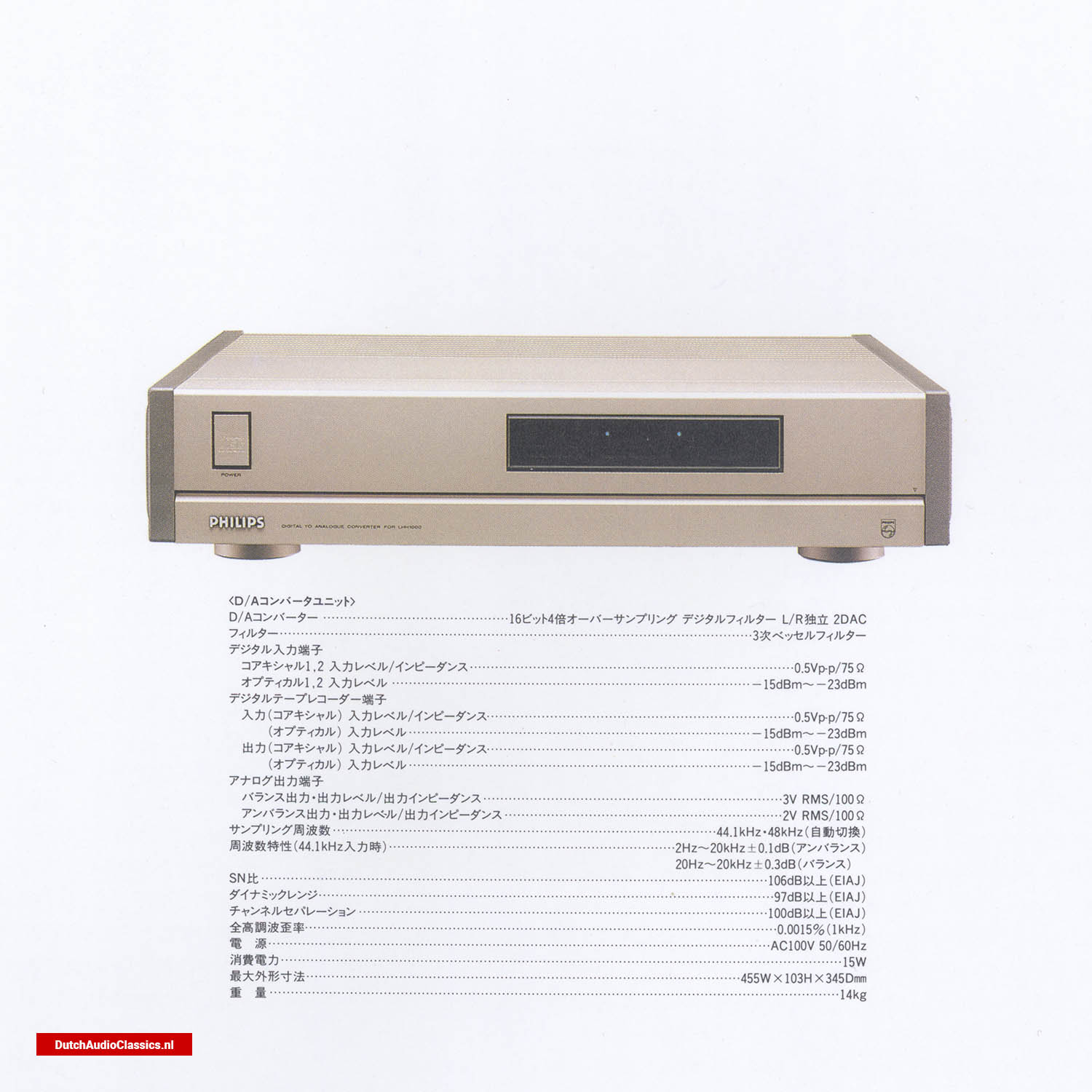 It was a period in which counterpoint developed and a great artistic flowering took place. From canon to fugue. That artistic leap was nothing more than the sign of 0s and 1s.

It is reminiscent of D/A conversion, where digital signals are transformed into beautiful music. The Philips LHH1002 D/A converter unit of the reference CD player system Philips LHH1000 is equipped with the "A-version", an even higher performance version of the 16-pit 4x oversampling digital filter that was pioneered by CD developer Philips.

The D/A conversion accuracy has been improved to the limit. Furthermore, the sound quality has been meticulously improved by thorough spurious countermeasures and power supply reinforcement.

The Philips LHH1002 is equipped with a specially selected silver crown S1 of the Philips TDA1541 A. Together with the excellent phase characteristics of the traditional L/R independent 2-DACs, this realises D/A conversion with overwhelmingly high accuracy, reproducing fading pianissimo with rich emotion.

The Philips LHH1002 inherits the design concept of the Philips LHH2000 and is composed of exactly the same circuit with an output transformer and parts that incorporate the latest technology. The balanced output circuit using an output transformer extracts all the audio signal from 20 Hz to 20 kHz and cuts out unnecessary bandwidth. Its rich, smooth sound is a perfect successor to the Philips LHH2000's unrivalled ability to reproduce music in terms of musical expression.

The unit is equipped with a jitter absorption circuit to deal with jitter (signal fluctuation with respect to time), which is a problem in optical transmission. Signals containing jitter caused by vibrations in the fibre-optic cable are pooled in the IC and extracted in the correct jitter-free cycle. As a result, an overwhelmingly low weight is achieved over the entire bandwidth.

Sound quality is pursued down to the smallest detail, including a powerful power supply section with three toroidal transformers and thorough spurious countermeasures.

In addition to the dedicated power supply, each circuit block is separated as a separate board and is covered with a copper-plated shield to thoroughly eliminate mutual interference and improve the purity of the sound. Other details include a copper-plated die-cast chassis and die-cast side panels to eliminate the effects of vibration, and a glass-epoxy board with a printed pattern made of copper foil twice as thick.

The Philips LHH1003 remote control unit for the reference CD player system Philips LHH1000 is an ultra-multifunctional controller that provides complete easy handling of all the outstanding potential of sound and function achieved by the system. 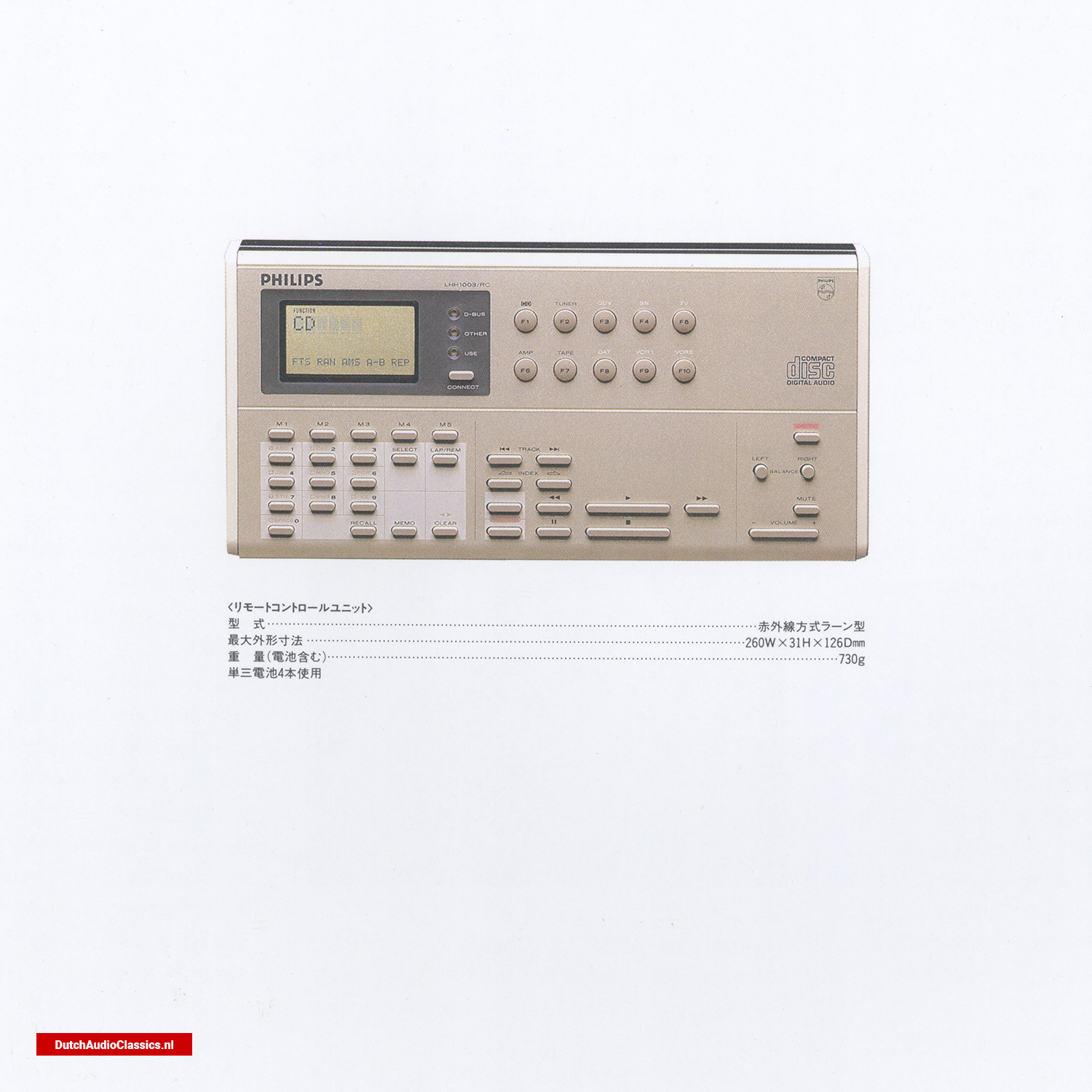 The Philips LHH2000 was highly acclaimed for its ability to reproduce music, but it was originally developed for professional use and required too specialised handling. The Philips LHH1000 is a top-grade consumer CD player, the Philips LHH1000 must have operability befitting a music listening machine.

The keys required to operate all the functions of the Philips LHH1000 are laid out in an orderly and user-friendly manner. A large LCD display shows the contents of commands and operations in an easy-to-understand manner.

The Philips LHH1003 remote control unit is equipped with functions that allow you to fully enjoy the features of the CD, including the unique Philips FTS (FAVOURITE TRACK SELECTION) blogram function and a variety of play packs.

The Philips LHH1003 is a smart table-top unit with a large liquid crystal display that shows the contents of the commands. The large LCD display has a contrast adjustment function.

The Philips LHH1003 can control the following functions. - FTS: - Automatic identification of up to 150 CDs and playback of the programme stored in memory for each CD. Random play, in which the microcomputer selects and plays tracks at random. The unique 6-mode repeat function allows FTS, random, programme, A to B, one song and all songs to be played back one after another. AMS (Auto Music Scan) function, which plays the beginning of a song one after another to help you find a song. - AMS (Auto Music Scan) function.

This function is the embodiment of the developer Philips' idea and is an indispensable feature for the reference CD player system of the new era. 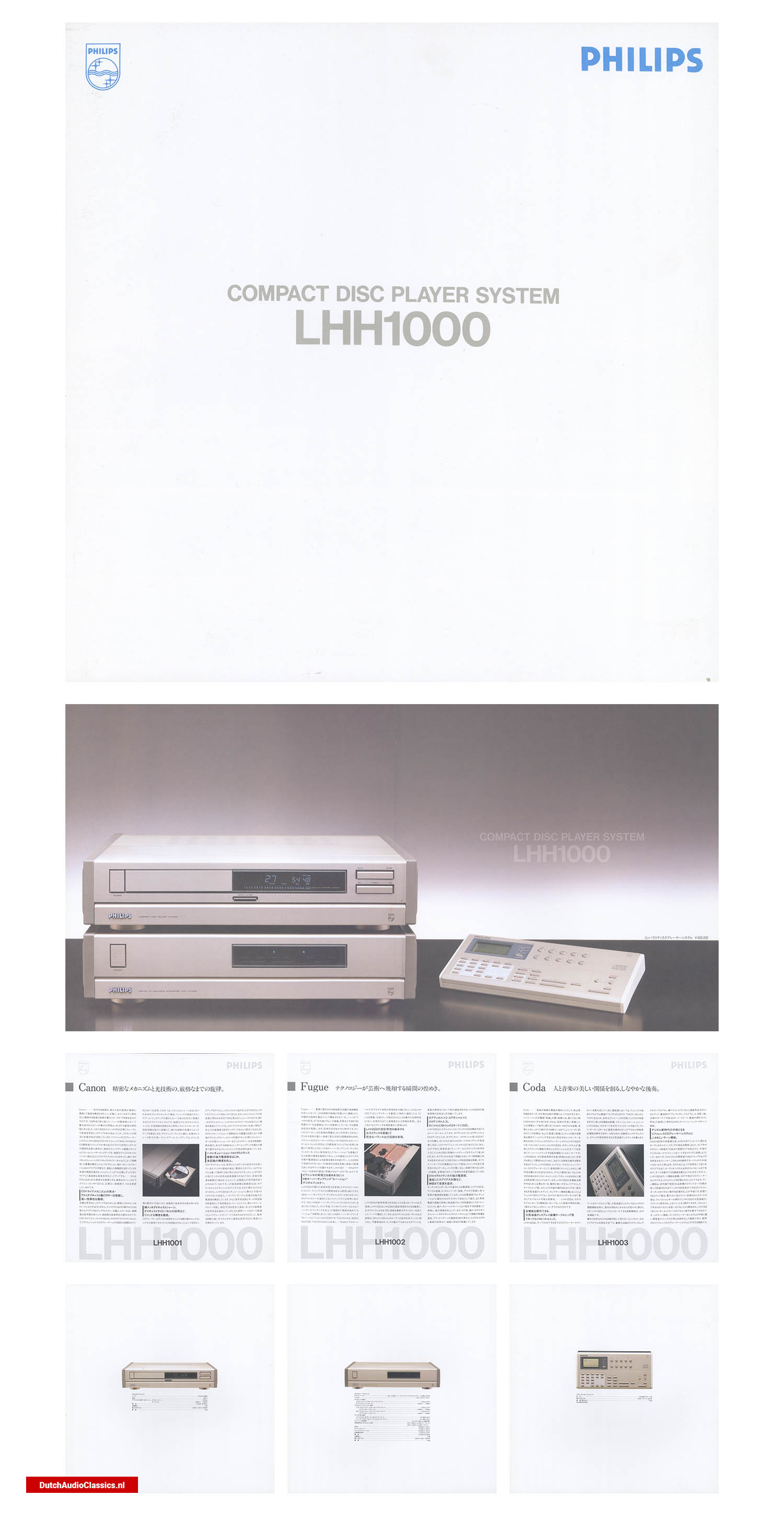