THE HAGUE - It is extremely expensive (between 1,700 and 2,500 guilders) and the very latest in audio technology, is almost as big as a large shoebox, was launched as if it were the eighth wonder of the world, and seems to be bought by anyone with a hat.

"Just listen, that thing boy, an insane success" cheers one of the top men of Polygram, with the rather appropriate name C. Goud, to us over the phone. We are, of course, talking about the Compact Disc phenomenon.

The Consumers' Association threw some oil on the waves this summer after the presentation of the ultra-modern record player, in an attempt to put everyone's feet on the ground. "That Compact disc is by no means indestructible, on the expensive side and the repertoire is rather limited," was the critical comment from the consumer association.

But not much influence seems to have come from that sober announcement. Step by step, the compact disc is beginning to gain ground on the time-honored turntable with an LP.

"In a few years the price will go down and then everyone will be able to buy it. I think within ten years the compact disc will have won out over the ordinary record." According to Bakker, the audio industry hardly invests in record players anymore.

"They are putting their money into the compact disc now. with an eye to the future. The enthusiasm of the record business is not entirely unexpected. In those circles, the compact disc is widely regarded as the straw for an industry that saw its sales drop by more than a quarter in five years.

In fact, early this year, record sales sank to a dramatic low. Hilversum-based record company Polygram therefore sees the compact disc hopefully as a "new injection." Polygram accounts for half of world production this year, some six million units.

"The breakthrough is here," said the record company. "In Japan, players are already on sale for under a thousand guilders, and we expect to be able to lower the price of discs soon. In August we opened a new factory in America and just recently there was an explosion in demand for players in Germany."

"The difference in sound is incredible. No, for me the compact disc is a revelation. You are crazy if you buy an ordinary record player."

Still, he feels there are drawbacks to the "wonder disc". "Expensive and a limited choice. But I'm willing to put up with that. Once you use compact disc, you get addicted to it." 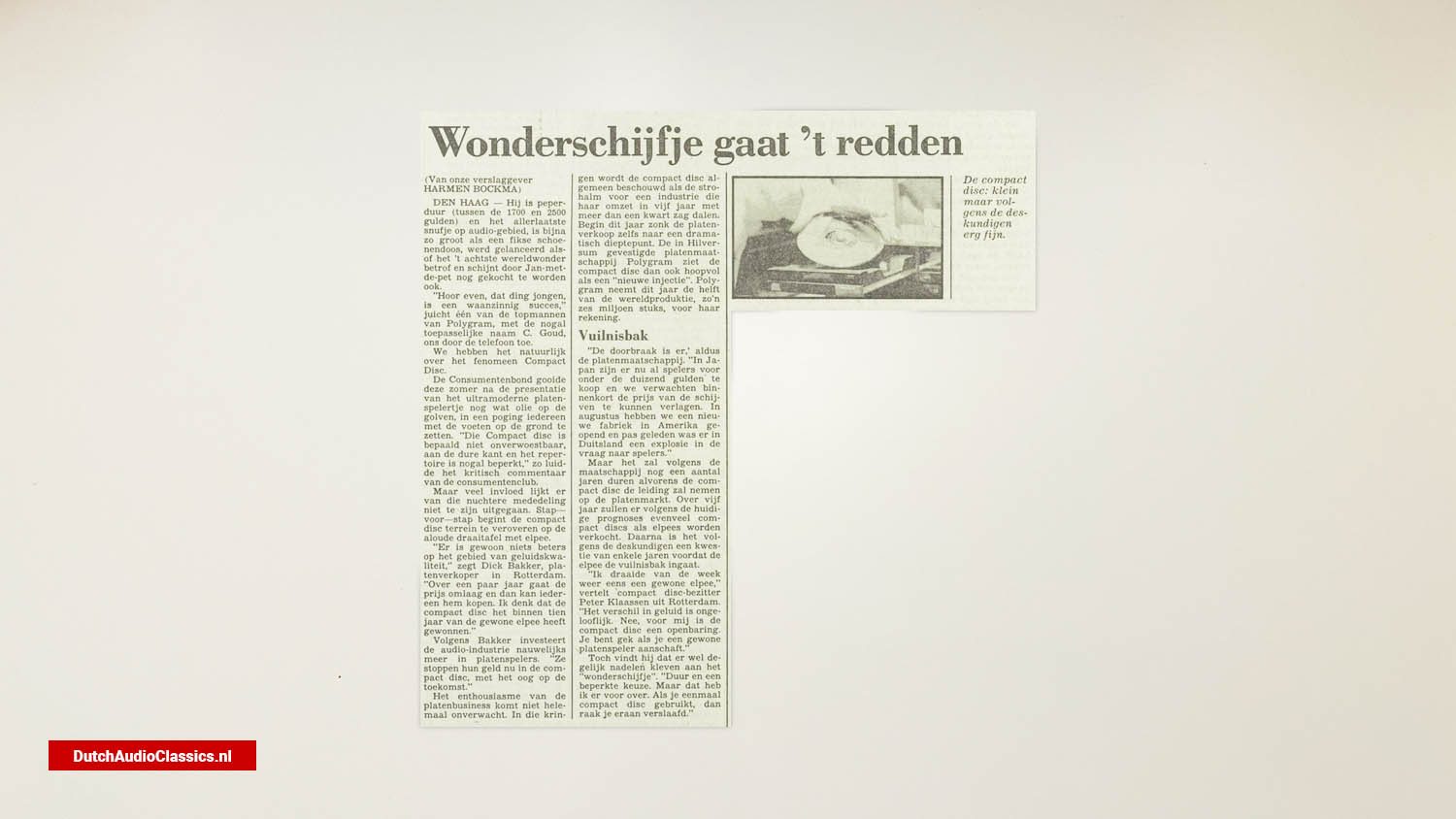