'Philips probes the future with the laser'Newspaper article, Saturday, February 5, 1983

EINDHOVEN - In the world of consumer electronics, standing still means going backwards. Philips, the leading company in this field, doesn't have to tell you that.

In a modest showroom near the new home of the Dutch electronics giant's board of directors, top executive C. J. van der Klugt is displaying the latest gadget for music lovers; the Compact Disc, a kind of small gramophone record that is scanned by a laser beam and provides hitherto unprecedented sound purity. The compact disc will arrive in stores in March.

Van der Klugt about his new product: "The technology and the system were conceived and developed entirely at Philips. Other companies were also working on it, but they still worked with mechanical scanning via a needle. For us it came down to standardized discs and playback equipment around the world.

So we started talking to Sony, the big Japanese manufacturer, and we did the last ten percent of the development together. Within 24 months, we got to the point where the biggest manufacturers in this field will make standardized equipment and records.

We think that is a great success. Also for the consumer. For our sales, this will be a very important product.

Your President Dekker has said that 1983 at Philips should be the year of the salesmen. Do you have more novelties in store?

Van der Klugt: "You can't force a big breakthrough every year, but something more is happening. This Year we are also coming to Continental Europe with a laser scanning-based picture disc."

American magazine Fortune wrote that that was not a success.

Van der Klugt: lThat is far too premature. On average, it takes five years for a new product to reach a five percent share of the market. We expect a lot from laser-optical equipment like the picture disc and the sound disc. But also from the professional application of this laser scanning technique for the storage of data, that is, data. That system is called DOR, in which the text of 500,000 A4 sheets of paper can be stored on a disc.

"We are also working in the video TV area on a kind of monitor-like approach in which all the equipment is grouped around a picture screen. Furthermore, we are gearing up for the broadening of program offerings in television that could reach 120 channels in the next few YEARS as a result of things like teletext, cable and satellite television.

Remember, within two years, the first broadcast satellite will go airborne. We are also preparing for television with stereo sound. We are waiting for the European PTTs to agree on this for standardization.

Japan has had stereo television for four years, which means that the industry there has been able to build up a big lead that will be of great importance to them when they enter the European and American markets in due course. Hence, European PTTs need to hurry.

You cooperated with Sony on that compact disc. Yet you think Europe should protect the European product from the Japanese record. How can that be reconciled?

Van der Klugt: "In Japan 40 companies are involved in the manufacturing of the disc. In Europe only Philips, Grundig. Thomson-Brandt, Duel and a few more. Since we do not have access to the Japanese market, the Japanese could make it impossible for European manufacturers to get off the ground with this product because of their large sales area. That is why we consider temporary protection necessary.

How do you intend to keep the Japanese competition at bay?
Van der Klugt: "In the three main markets, Japan, the USA and Europe, we have seen the Japanese industry grow stronger after the war. If we look at the consumer and microelectronics area, the fact is that we are still the largest TV manufacturers in the world.

Furthermore, we have -I say it without pedantry- the strongest market organization in the world. Moreover, the basic technology for our products still comes from our own house and that is the only way to remain "leading" in this field.

We will never become a reseller of other people's products. We want to be present in all three markets with our own technology. In America, through American Philips, we have 15 percent of the TV market and have our own production units. In Japan we have a 50 percent stake in Marantz and have had a subsidiary together with Masushita for thirty years. But in Japan you do come up against Japan-incorporated, the well-known unity of purpose between government, banks and industry in that country and this together with the Japanese competitor's own marketing chains makes it difficult to penetrate this market.

Through your 26.5 percent stake in Grundig, you have again come up against French competitor Thomson-Brandt, which wants to take over the rest of Grundig. How did you experience that?
Van der Klugt: "Thomson's strategy is to cen such a size that they can cope with Japanese competition. That is also ours. Grundig is an important customer and system partner for us.

To secure that, we took that minority stake at the time. More was not allowed by the government in Germany. Thomson has promised that they will not jeopardize our relationship purchase and cooperation with Grundig.

Moreover, we informed Thomson that if they really want to strengthen the European Industry, in the long run they cannot continue with the Japanese video system but must switch to ours. They were very positive about that. If Thomson gets a permission from the German authorities to take over the rest of Grundig, then the whole matter will open up again.

Philips is a giant and ironclad. Germany's AEG was also a giant, but went to the wall. What Is the Difference?
Van der Klugt: "Unlike AEG, Philips is a very homogeneous firm. AEG, as part of the Wirtschafts-wunder, rapidly bought up dozens of firms and built a conglomerate after the war and probably didn't have enough time and manpower to supervise those ventures.

Taking over is quite possible but the graft has to be right. We acquired Bauknecht (home appliances) but made sure we had a good graft with Philips so they know where to get the knowledge. Bauknecht will soon contribute to our profits. That homogenitelt, that interconnection, that's what it's all about" 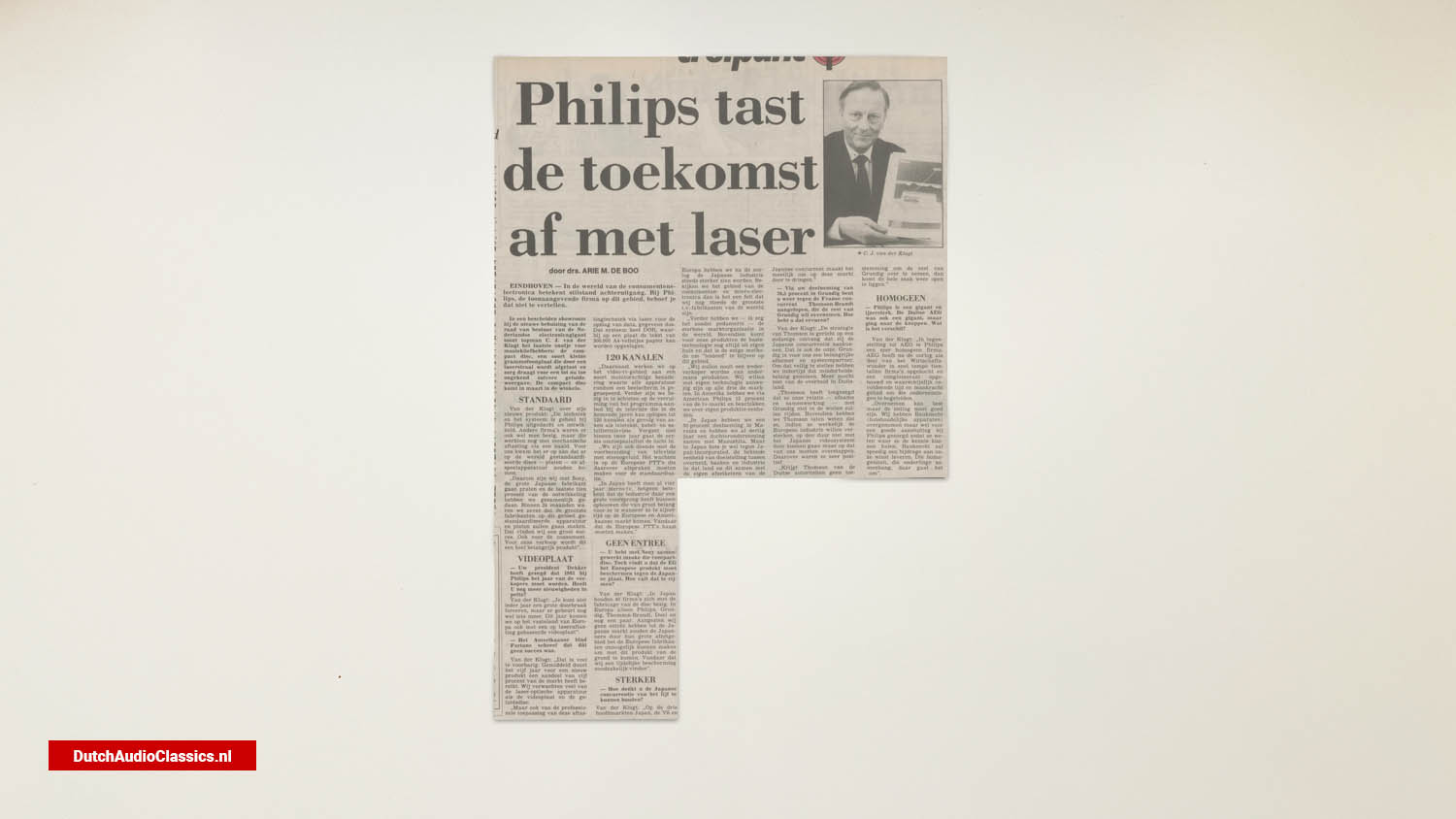