If by the end of this year the first compact disc players and records will be in the stores it may be seen as an international triumph for the Philips group. It means that technology developed in Eindhoven has won the battle for the world market. A showdown, which was mainly fought in the inner rooms of the Japanese electronics giants. Because the rest of the world has adapted to practice: if you want to standardize something in the electronic field, that decision falls in Japan.

No less than thirteen systems have competed for the profitable position of the accepted system. Philips, which saw this battle for a billion-dollar market coming many years ago, executed a brilliant tactical maneuver, seeking cooperation with Sony at an early stage of development. A foot in the door of Japanese decision-making power.

Of the thirteen prototypes, ten quickly dropped out during acrimonious testing and negotiations. And in the end, all Japanese manufacturers of any significance accepted the Philips-Sony concept. The European manufacturers had only to conform to that preference.

The United States played no role in any of this. America hardly has a hi-fi industry of its own anymore. Eighty percent of the market there is dominated by Japanese factories and Japanese capital.

Philips had a competitive advantage in one important respect: there are few companies, which make audio equipment and, moreover, have such close ties to the gramophone record market. Philips subsidiary Polygram, also closely involved in the development of the compact disc, was therefore ready for take-off once the winning design was known.

Philips negotiators are now working to clear the final hurdles: selling the system to the major American record companies. There is no doubt in Eindhoven about the outcome of those negotiations.

Now that Philips and Sony have sold the licensing rights for the playback equipment to all the major producers, the LP manufacturers have no choice if they don't want to miss the boat.

The compact disc seems like a well-timed innovation that could revitalize the slightly stagnant playback equipment business. While normal pickups and records will remain on the market for years to come, the industry holds the key to scaling back production of new titles on "old-fashioned" records at any time and gently forcing consumers to the new technology.

A market policy, which finds its justification in improved quality and increased ease of use. For however one views this change, the new digital record is a minor technical marvel. Whether it is "the most important innovation since the invention of the incandescent lamp" remains to be seen. But compressing an hour of flawless, high-quality music reproduction on one side of a 12-centimeter skiff is still a feat, which captures the imagination.

The music signal is captured on the record in the form of tiny pits. There are no grooves. The relief is scanned by a laser beam, which is condensed to a tiny dot through a lens system. The changes in the reflection of the beam caused by the pits are converted into electrical signals, which are fed to a normal amplifier.

Other major differences from the familiar gramophone are that the laser works from the inside out and the record does not spin at a constant speed.

During playback, the speed reduces from 500 to 200 revolutions per second. The pits are covered with a plastic layer, making the compact disc impervious to wear and tear and damage.

At launch, Polygram expects to have between 200 and 250 titles ready. Popular plater will cost about 35 guilders, classic about a dozen more. In the new Polygram factory in Hanover many existing records will be transferred to compact disc. In 1983 the customer should then have a choice of about 600 titles.

Playback equipment remains very pricey for the time being. The simplest versions will initially cost around 2,300 guilders. The devices lend themselves to programming, allowing one to play the songs on the record in any order one wishes. A matter of keying in. It is also possible to add text information on the record. Whoever buys a player with a screen in the future will be able to see there, which track of which record he is listening to. Wireless remote control is also possible.

According to the manufacturers, the sound quality of the compact disc systems is beyond praise. The big advantage seems to be that distortions and noises caused by normal pickups are completely eliminated. 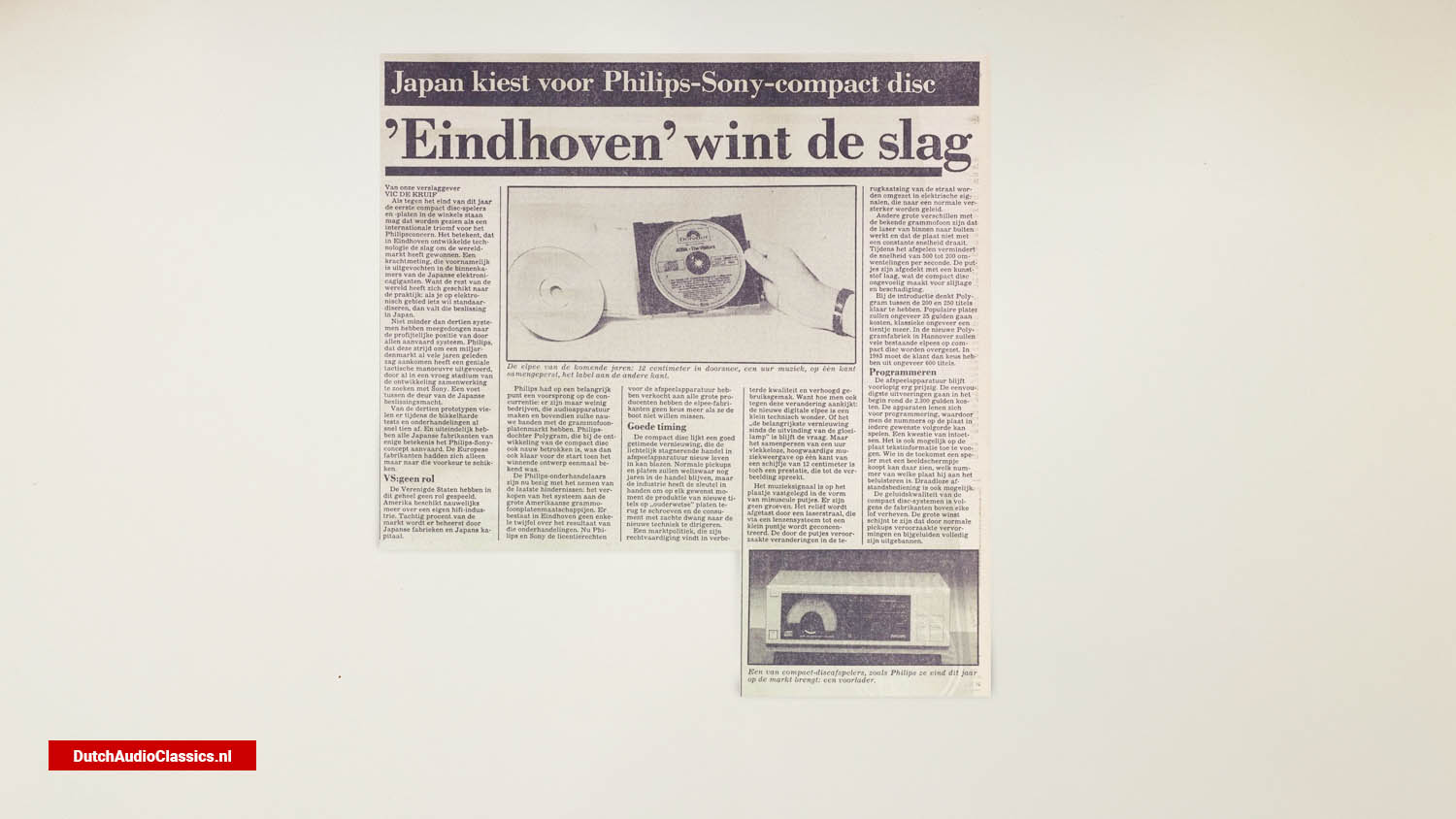