The equipment is apparently not a problem, but the discs still are. Although there are now some forty factories around the world that manufacture compact discs, there is still a substantial shortage, keeping prices high. Only a' single chain store or hi-fi specialty store attracts customers with B-choice discs: for about 7.25 guilders. But that is still an exception.

If it is up to PDO, that will change. By Christmas they expect that the forty factories can press enough silver discs internationally. Supply and demand will then be in balance. The development has been so rapid that even the most optimistic professional forecaster was wrong. The market for compact disc players and discs was underestimated.

PDO stands for Philips and Du Pont Optical. It is a specially formed combination, for manufacturing compact discs of 12 cm size or 25 and 30 cm size (picture/video disc). Although Du Pont is one of the largest chemical concerns in the world, its input is currently limited to knowledge of the U.S. market and financial support for the combination. The know-how comes from Philips or actually from Polygram. The Hanover plant is Europe's largest in the CD field.

However, the Siemens share in it has now been taken over. The new combination also has a large factory in Blackburn, where CD-Video discs (the new picture discs) will now come from. When they began producing CDs in Hanover in '82 (after tremendous investment), the plant was the first in the world to produce CDs on any scale.

A process similar to that of record pressing was used. However, because the information on the small CD is one hundred times more finely distributed (in the form of millions of tiny pits) the process makes tremendous demands. There had to be a very dust-free area in the factory. The people, who work in it, wear special clothing and gloves and work under conditions that are very reminiscent of a laboratory situation.

Although they tried to work as precisely as possible from the beginning, in that first year they produced only 200,000 CDs. Much of that went to Japan, where the CD was introduced on January 1, '83. In March '83, it was Europe's turn. By the way, a multitude of those records were pressed. But initially almost everything went wrong. In the first year they had to contend with a failure rate of about sixty percent of the entire production.

One learns by doing. PDO produced fifty million records in '86 and is estimated to produce some 85 million CDs in '87. The dropout rate has dropped below ten percent . Production is further increased: after all, they still cannot meet demand. At the beginning of the nineties one hundred million records per year will be produced.

This gigantic production is at the expense of the ordinary record: the LP. There are more and more CD players and the price has already dropped so much that it has become comparable to that of a good quality record player. Philips had predicted something similar when CD was introduced. Furthermore, there is already a lot of choice in devices.

What is surprising - and what the planners could not have foreseen - is that the CD and the CD player were so naturally accepted by the public. True, the principle of the gramophone record was already some hundred years old, incomprehensibly old in our technological world, but much had been improved in the process.

Still, the LP had a host of drawbacks that bothered collectors in particular: slow deterioration of sound quality, increasing rustling and risk of scratches and even an exemplar becoming unplayable. Two inventions - and credit where credit is due: Philips had a great part in this - made the technical breakthrough possible. The laser and the computer technick. Using the laser beam, one was able to write very finely divided information on the master disc and also scan it again (in the player). The thin laser beam could recover all the information without damaging the record.

But in order to fit so much information (the entire track on a sixty-minute CD is 4,500 meters long) onto a 12-cm disc, one must divide that music into very small parts. This could be done through computer technology.

The computer knows "words" of ones and zeros that can be drawn and scanned with a laser beam. It is an unimaginably complicated process that we are slowly taking for granted.

But creating CDs is also unimaginably complicated. Hence, there are nowhere near enough records. Only very wealthy companies can afford to set up a big line for it. Hence, only around forty companies are now working on it. PDO is convinced that some of them still have to overcome many problems in the production process.

But the supply is finally coming closer to the demand. It's about time too, because a vinyl record with the same music currently costs half as much as a CD. Especially the classical repertoire is pricey. Nevertheless, at Polygram they are convinced that the days of the LP are numbered.

They are more positive about the music cassette. Its production is expected to remain almost stable. At the moment about 16.5 million of them are produced, and as long as there are huge numbers of walkmans in circulation and cassette devices in every radio, it is thought that pre-recorded MCs will continue to take second place.

The CD, however, will remain the trigger in the coming decades. In addition to the twelve-inch music CD, some five hundred titles of computer CDs have already been pressed in Hanover. For the production process, this does not make much difference. Only the quality control is even stricter then.

These discs contain exactly the same pits as ordinary CDs. Only now they have to be read out using a computer. Some 120,000 to 150,000 pages of A4 text fit on a CD. And so it is a gigantic storage medium. Two types of computer CDs are now known. The CD-ROM (the Read Only Memory): a storage-place of endless data in usual typewriter letters and characters, and the CD-I. That I stands for interactive (medium). In this process, a computer does not extract letters and characters from the disk, but also drawings: graphic characters, that is.

Although much standardization is still needed in this area, both media have a great future. The first for encyclopedic applications and the second as a learning tool via computer. Of course, the next step is CD video, not only on 12 cm, but also on 25 and 30 cm. True, all test prints for this were made in the Hanover laboratory, but actual production will take place in Blackburn, England. CD video (a popular type of picture plate) will be introduced in August/September.

Meanwhile, the laser technology is far from exhausted. With the multi-layer technique, where one applies layer by layer, it may be possible to write even more data (or music) into the 12 cm plate. Furthermore, in the future one will work on a polycarbonate plate (polycarbonant is the transparent material of which it is made) that itself with a device at home may also be able to write. But that is literally still in the future. 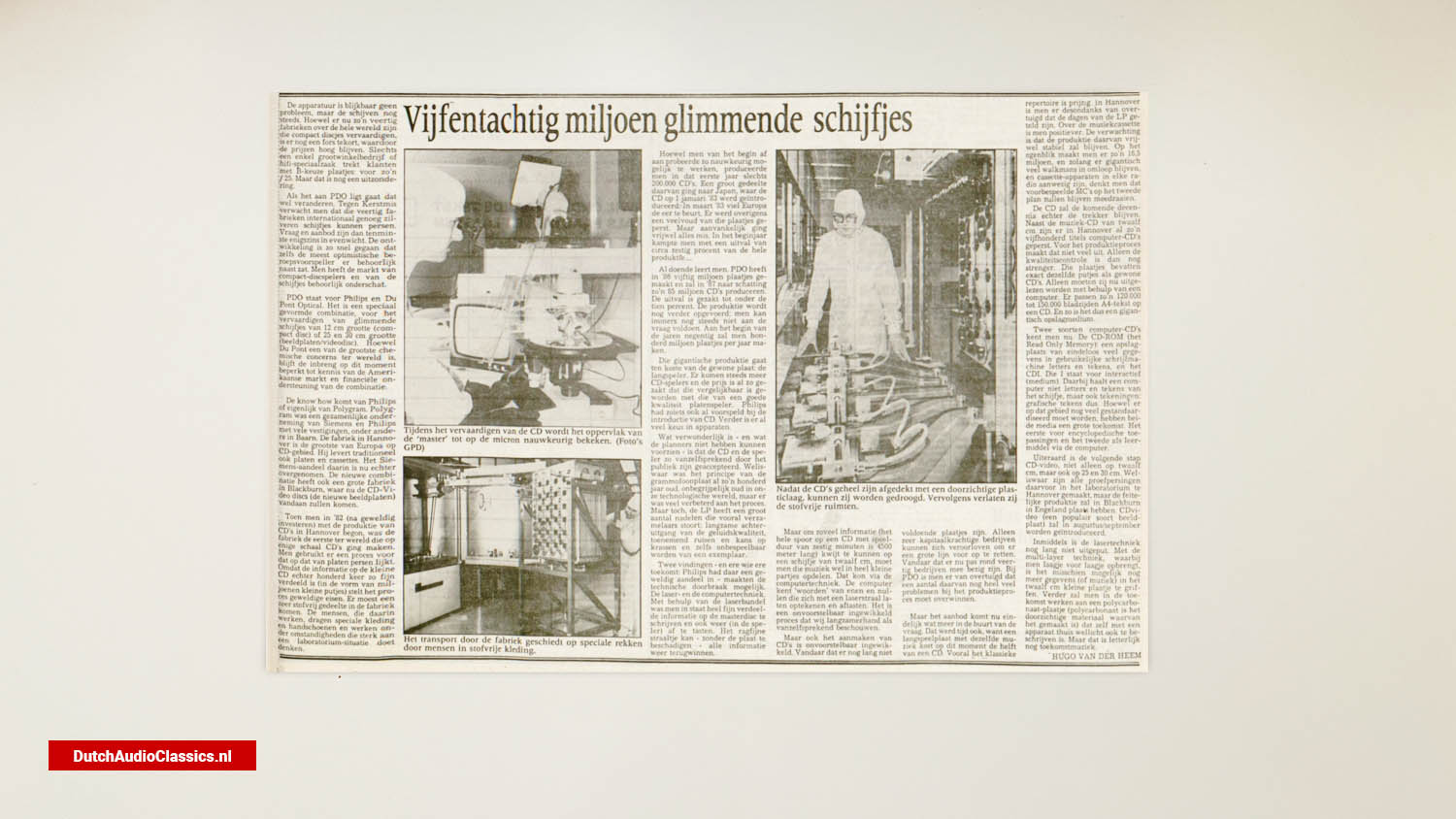