ROTTERDAM - The price war unleashed by Philips around the compact disc is not going down well with the public. Sales of the novelty, introduced with much tam-tam one year ago, are still lukewarm. Even last week's price reduction of 1000 guilders for the cheapest Philips CD100 cannot lure the public to the stores.

Not only Philips records disappointing results with the CD player it invented. The ten to fifteen other firms operating in this market are not doing too well either. In total, the audio-visual industry in the Netherlands has managed to sell no more than 15,000 compact discs since '83. From this figure it can be deduced that the silver disc will not drive the ordinary pick-up from living rooms for the time being.

Why has the success of the universally praised "wonder-mole" and "superior" sound reproduction showpiece taken so long?

Surely the retail trade raises as one of the main reasons: price. And despite the super deals with which Philips in particular is now trying to sell its compact discs, most people would rather spend such a sum on a foreign vacation or a VCR. "If marketing surveys are to be believed, the compact-disc is very low on consumers' wish lists," said the spokesman for a Rotterdam-based audiovisual equipment store.

"The compact-disc is still too expensive and therefore the public takes a wait-and-see attitude. It is simply taken into account, that this equipment will continue to drop in price. This is a justified assumption, of course.

When new models soon appear in shop windows, such a Philips CD 100 uiteindellfk will cost six or seven hundred guilders. With the latest price reduction of 1000 guilders, they have already indicated in Eindhoven that that price is in."

A second reason for the disappointing sales, is the price the customer pays for the compact discs. The recommended retail price of a classic record from the Polygram (Philips) label last year was 46.50 guilders.

As of January 1, the VAT increase added 3 guilders. The record company also has no intention of keeping pace with the falling price level of hardware, says Polygram employee J. Rubinstein.

"No, we are pertinently not lowering prices. The offer prices remain high because we don't see the need to reduce them. Nor can we, mind you. If you lower the price for a compact disc, you create additional turmoil in an already difficult market."

Retail thus points the finger of blame at the software industry: "You don't estimate a record like that just like that. No one can build a reasonable collection at those prices," grumbles one retailer.

"And if you keep raising them, it's clearly counterproductive. It becomes too costly a joke. Another point is, software has long lagged behind developments in hardware. When the CD player arrived in stores, the interested party could choose from two records to listen to on his new purchase. It took far too long for the record companies to offer and reasonable assortment of records. Now that this assortment is there, it appears to be unaffordable to the general public. Too bad." 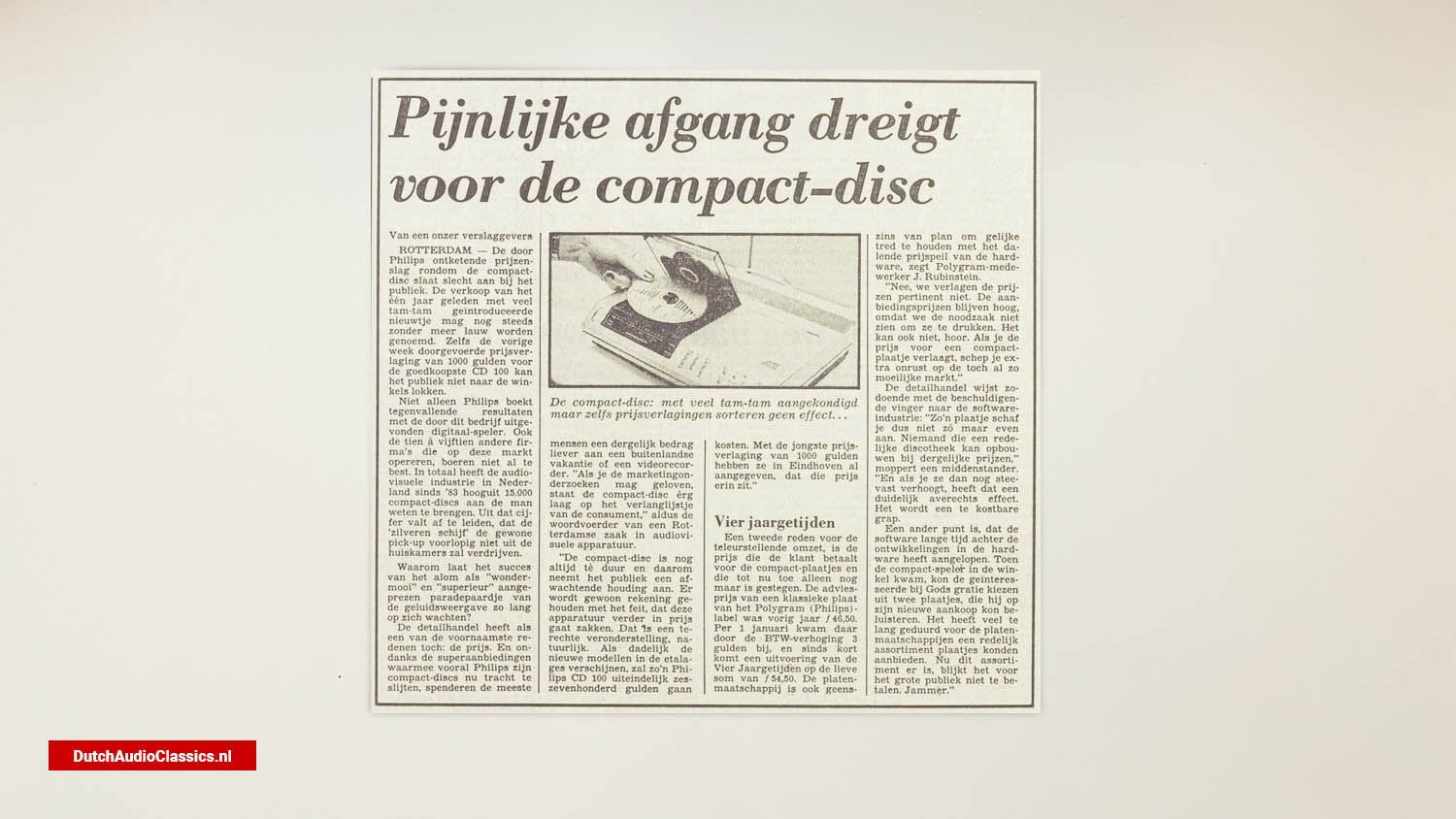