EINDHOVEN - Philips has emerged as the undisputed market leader in Western Europe in the field of compact disc players in recent months. Commercial director F. Dierckx of the Philips product division audio notes that with tee satisfaction. Dierckx refuses to quote figures. He will only quip that Philips' market share is "very high." LWe take a particularly strong position".

The compact disc player is the successor to the good old gramophone. The device uses a laser beam to read information recorded in tiny pits on a special disc. The main advantage of the compact disc is better sound quality, while the records are more resistant to damage.

Dutch importers of Japanese audio products are not so happy with Philips' European hegemony. In recent months they have sought publicity with the regularity of a Japanese quartz watch to express their indignation about "Philips' demolition policy." They say, that Philips throws the compact disc players on the market at dumping prices, eagerly taking advantage of the fact, that since January 1, Japanese competitors have to pay 19 percent tax when introducing the devices in the European Community.

In this way, the price difference between the Philips device and the Japanese players has allegedly become so large that competition in Europe is in danger of being completely wiped out.

Complaint Importer Brandsteder Electronics has complained, that Sony's market share in the Netherlands has now plummeted from eighty to ten percent. The sharp decline in Japanese sales in Western Europe has been a concern for MITI, the Japanese Ministry for Trade and Industry, several months ago already prompted it to file a complaint with the Import Tariff Commission of the Gatt, the General Agreement on Tariffs and Trade.

The Japanese take the position, that the doubling of the EC import duty on compact disc players is unfair. They say, the development of the European market is slowed down because Philips threatens to become almost a monopoly. The European Community decided last year to double the import duty "to protect a young promising European industry in its early stages."

Philips CEO Dierckx is little concerned about the Japanese complaint. It's all part of the game called free competition. The relationship between Philips and Sony, who developed the compact disc together, is as good as ever. According to Dierckx, Philips can demonstrate very simply, that there has never been any question of dumping. The selling price has always been higher than the cost price. However, the halving of the retail price -from 2000 guilders last year to 1100 guilders now- has gone much faster than Philips liked, but according to Dierckx that is the fault of the Japanese.

Price war They had estimated sales too optimistically, causing a temporary overproduction last year. As a result, prices plummeted first in Japan. Then Europe naturally followed. In order to get rid of the accumulated stocks, the Japanese were even forced to introduce the compact disc player in America considerably earlier than originally intended.

"Not we, but the Japanese started the price war," Dierickx says emphatically. The result, according to the Philips director, was great unrest among dealers in Europe. No dealer felt like buying his compact disc players too expensively, so sales stagnated. Something had to be done.

Hence Philips decided to slash sales prices in one fell swoop as of March 1 of this year to bring calm back to the market. This maneuver cost Philips a lot of money, because little remained of the profit margin.

On the other hand, the Dutch group was suddenly able to expand its market share in Europe. Sales also received a new boost. The company simply did what the Japanese have been doing to their Western competitors for years: in anticipation of higher production numbers and better manufacturing techniques, lower the selling price.

"Philips is giving the Japanese a taste of their own medicine," said state secretary mr. drs. F. Bolkestein (foreign trade) back in April, in response to Eastern lamentations.

Pingback Dierckx clearly likes to be reminded of that statement, but he does not adopt it himself. He does admit, however, that it is "pleasant" to be able to strike back for once after the Japanese have made life miserable for their competitors in Europe and America so many times before. "This time we took the hits!" says Dierickx. "We just grabbed the share that is our due in. a home market." The Philips director emphasizes that there is no question of cen threatening monopoly power in Europe. He then subtly recalled that Western electronics companies were still barely getting a foothold in Japan.

According to Dierckx, the European success of the Philips compact disc player is not solely due to its low prices. He points out that the prices of the Philips devices and the Japanese players do not differ at all as much as Sony importer Brandsteder Elecronics would have you believe.

Expansion The production capacity of the factory in Hannover, the largest in the field of compact discs in the world, will be expanded for 1985 from 5.6 to about 14 million compact discs per year. After some insistence the Philips director is willing to admit, that the company has been able to strengthen its position in Europe thanks to the doubling of the import duty on Japanese devices. If it were up to Philips, the 19 percent import tax would be maintained for the time being. According to Dierckx, the Dutch group could manage on the European market even without that import tax, but that would be at the expense of profit margins. Philips badly needs that money for new investments, according to Dierckx.

Fastest grower All in all, the market for compact disc players is developing exactly as Philips anticipated three years ago. In the first year, less than 500,000 units were sold worldwide. That number is expected to more than double this year. According to Dierckx, this makes the compact disc the fastest grower the electronics industry has ever known. Especially in the United States, sales are growing explosively. Sales in America are doing well. A year and a half after the introduction of the compact disc, several new applications are in the pipeline.

Philips is launching a new: generation of players at Firato in August. Furthermore, a new version of the compact disc will soon be available, while portable compact disc players are also expected soon. In addition, the use of the compact disc as fixed memory for computers looks very promising. Dierckx with certainty: "The compact disc with its derivatives will in the future make a very important contribution to the turnover and profit of our company". 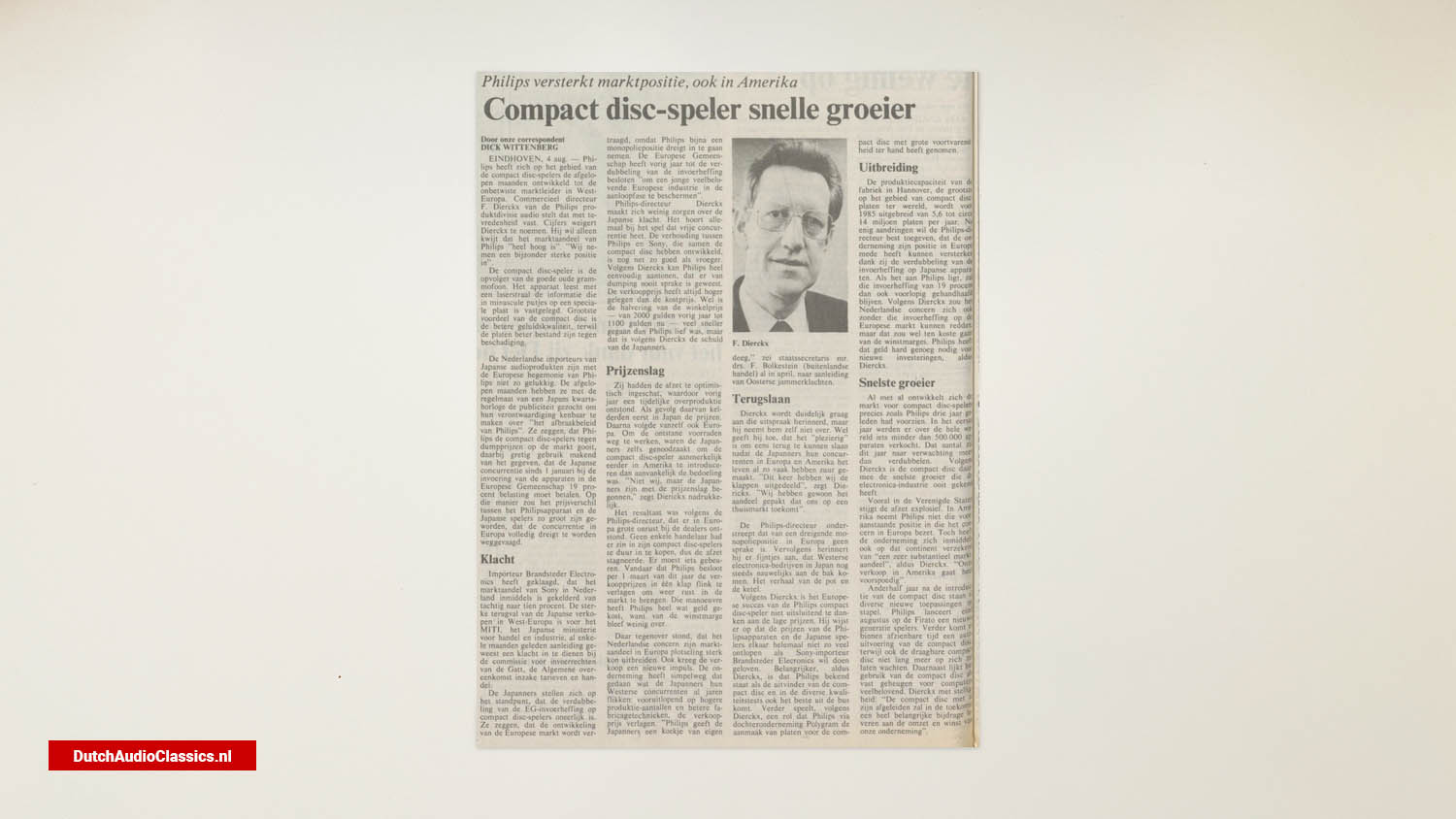