PARIS, March 10 - Before the end of this year, Philips will enter the European market with the so-called Compact Disc. This is a round disc of 12 centimeters in diameter that is "read" by a thin laser light beam during playback. With the release of this revolutionary digital system - already licensed by about forty manufacturers around the world - Philips is several years ahead of its original schedule.

That was the main news at the Paris "Festival du Son et de l'Image," the French equivalent of the Dutch Firato. With due pride the director of Philips Netherlands H. C. van Dijk told there, that with this a total system of record and playback is presented.

In the late sixties Philips decided to invest in optical electronics. In 1979 the first working systems could be shown and in that same year contacts were made with other producers of so-called hardware and software to lay a basis for and universal standardization agreement.

Most important was the agreement with the Japanese giant Sony to develop the Compact Disc system. This has helped to make this new generation of audio equipment a global system, where playback and records will be completely technically compatible and interchangeable.

The concept of conventional records and turntables has been completely abandoned. The music signal is applied in the form of tiny "cullets" to a round plate, which is coated with a transparent plastic after pressing. By using the laser beam, there is no mechanical contact with the record itself, which in turn eliminates wear and tear and damage.

By the end of this year, around two hundred titles will be available with a doubling in the following year. "From classical to pop" as the spokesperson for Polygram reported in Paris. Extensive market research provisionally determines repertoire, packaging and the like. One hour of uninterrupted music will be delivered per plast.

They are currently being pressed at the Polygram factory in Hanover and will cost between 35 and 40 guilders each. The turntables will be assembled in Hasselt, Belgium, for an estimated retail price of 1500 to 2000 guilders.

Although expectations are high, the Philips people in Paris did not want to make exact projections. For the Netherlands, there is no expansion of employment in it, although numerous components come from Dutch Philips plants. The start of production this year will be in phases.

The models to be launched still contain quite a few unique gadgets, but the future, according to the technicians, offers even more surprises. For example, at the same time as the music, some form of text information up to scores could be recorded on the record, which could be made visible on a picture screen. 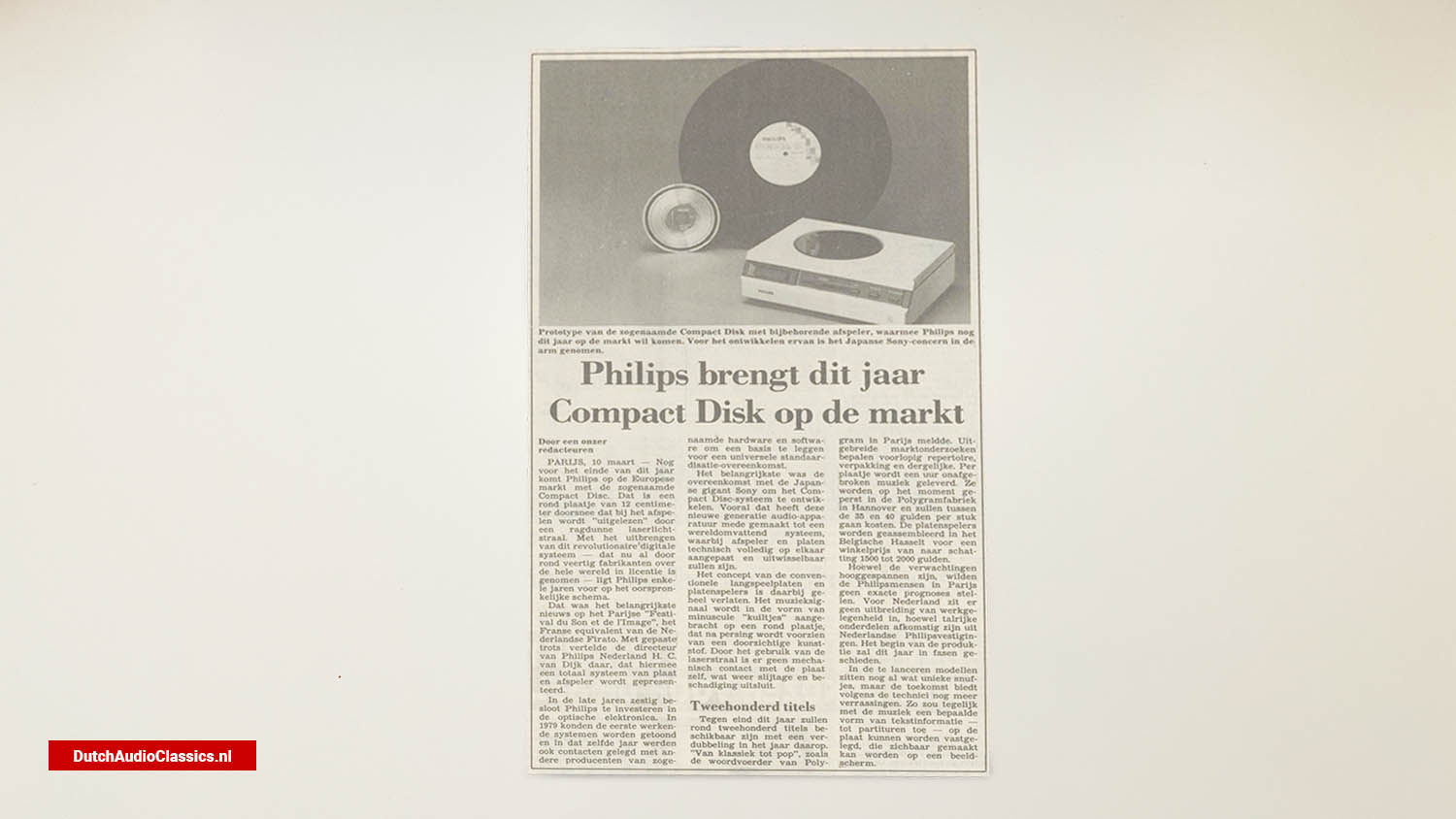