In a few years the music lover will not get away from it: he will have to buy a new kind of record player for the compact disc, the elpee replacement that Philips has very confidently unveiled. Now the electronic industry is often suspected of keeping profits and sales high by artificially cultivating needs. It makes zeifs sense: the record has had its centenary and after a hundred years, the end of the possibilities for improvement must be in sight. Especially if those improvements are to remain affordable.

The surface of vinyl is rarely so flawless that it doesn't rustle. No record has even close to the dynamics heard when performed in kind. A record also wears out; capturing the highest tones on it is useless because they are quickly worn away by the equally wearing diamond. And complete disasters can happen if one does not realize quickly enough that and broken diamond is killing the records.

The engineers annoyed at home could prove in their laboratories that today's technology can overcome all these objections. In doing so, they invariably applied a different method of capturing the sound signals. The record has a groove in which the vibrations of the music are imitated to scale. If the sound consists of the many small vibrations per second of a high tone, there are just as many small waves in the groove. With a bass proportionally few large waves.

The groove is a proportional or analog model of the sound waves, just as in the whole system between microphone and speaker currents or voltages constantly form an analog model of the sound waves. In a "digital" method such as pulse code modulation (PCM) the sound waves are not mimicked but measured at intervals. If these intervals are large, then one can only very imperfectly reconstruct the original from the measurement results. The more often per second one measures, the better the result. In practice, more than forty thousand measurements per second are only enough to reconstruct sound waves with frequencies of up to 20,000 Hz. This is an awfully long series of numbers, especially if they are written down according to computer tradition in the binary system, which knows only ones and zeros and needs four "digits" to represent, for example, the "9": 1001.

All this ado has an advantage: only the length of the "numbers" determines the quality. Gradually, therefore, PCM recorders appear in the studios that do cost a few hundred thousand guilders each but achieve signal-to-noise distances of 90 dB or more without significant distortion. Ordinary tape recorders, with that help, achieve at best something above 60 dB, and then one measures the distortion in full percent.

For the studios, PCM tapes can be copied without loss of quality (record presses can be used anywhere in the world), which can be forgotten with ordinary magnetic tapes. Logically, PCM was also considered for the living room. On Philips' compact disc, the string of ones and zeros is translated into "dimple" and "no dimple." In addition, information was inserted into the code to guide the scanning laser beam and control the motor speed. It no longer matters whether the center hole is pre-cles in the center. Looking up the tracks by eye becomes somewhat difficult, but number information is easily applied so that the player itself looks up the desired track, or skips it if desired. There is even room for text to appear on a screen that tells you what is playing.

By allowing laser light to scan the pits, the problem is of the wear of the track. There is a transparent layer over the reflective metal of the pits as protection. Through this, the laser light beam is focused on the pits. Any dirt or scratches on the surface remain out of focus and do not affect playback. All within reason, of course; those who let the compact disc get completely dirty won't hear much anymore but they can fix it with a cloth.

Of course, Philips has not been the only one looking for something new. From some Japanese laboratories versions of the PCM record were conjured up that also produced a very fine sound. Usually those records, like the LP, had a diameter of thirty centimeters. Or they still used some kind of pick up like that of the Teldec picture plate, with wear and tear, that is. Philips doesn't brag much when it calls the compact disc with its nice little size of 11cm diameter and light scanning the attractivests system. But whether there will be a new kind of disc and what it will look like is not decided by Philips but by the collected industry. Who still bitterly thinks back to the adventures with the quadraphony. The public, record companies and equipment manufacturers have all put in an enormous amount of money.

Philips does look forward to starting on its own. With the compact cassette, it was still possible. a considerably less risky venture. Specifications are now being discussed. The discussion can be quite difficult: there are quite a few financial interests at stake. At stake are licensing rights to name but a few. That's why nobody dares to give an exact year for the entrance of the better album of the eighties.

But it is coming! It would be too crazy to leave the possibilities unused. And the regular album? That one is far from gone because there are roughly an estimated two hundred million turntables in the world. The LP will remain an attractive business for the time being. The world's citizenry has about three billion records in its cupboard so that for the time being it continues to pay to produce replacements for worn-out turntables. So you need only slowly succumb to the undeniable charms of the compact disc. 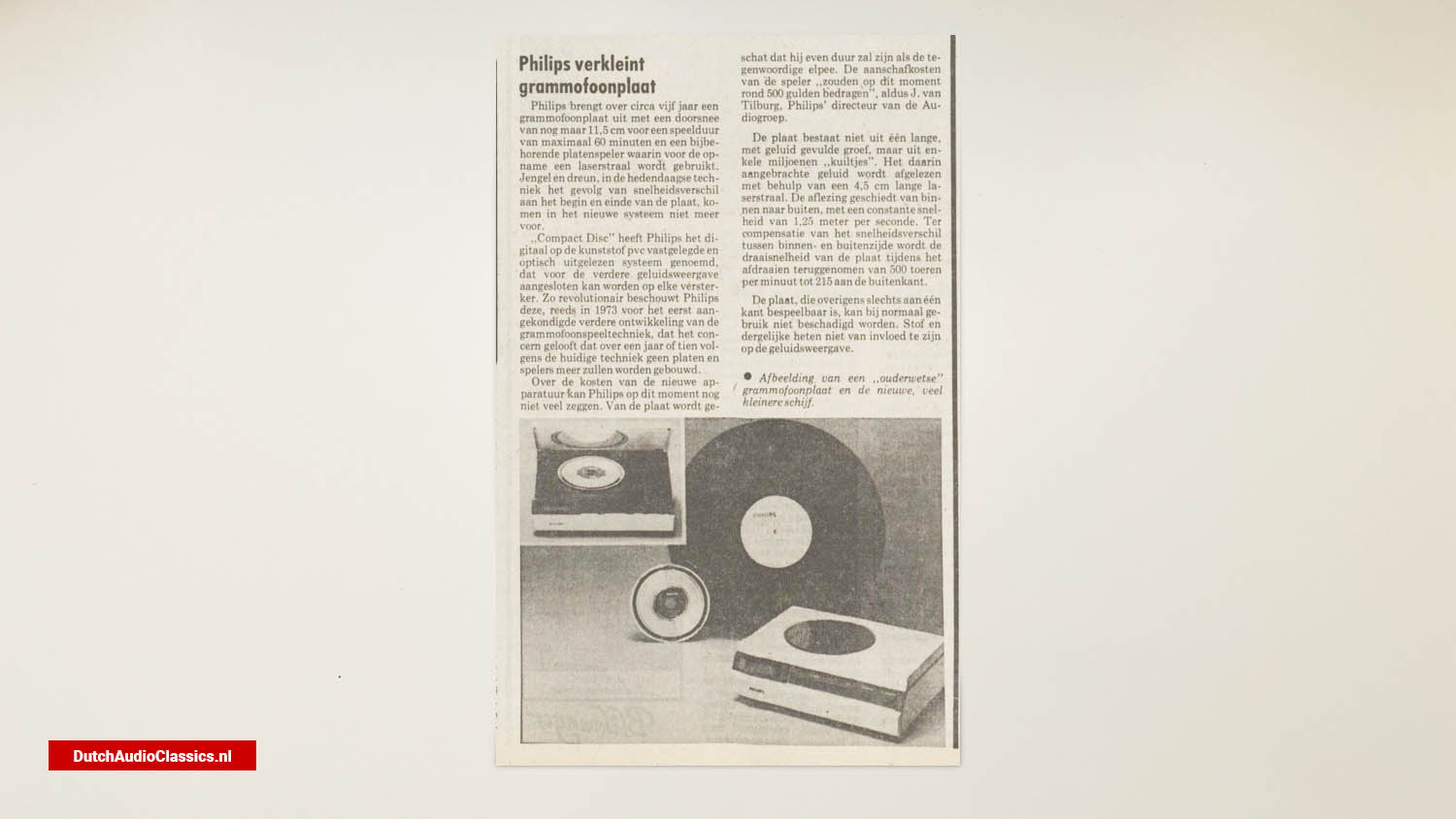