Grading process of the Philips TDA1541A into R1 and S1 grades. 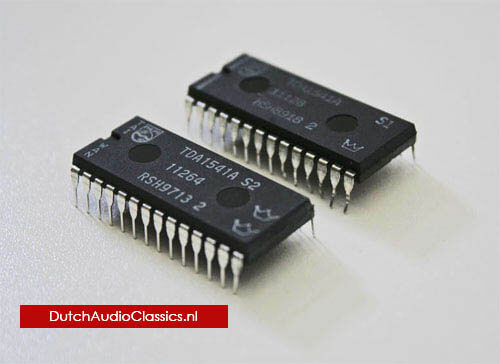 Grading process
There will still be intrinsic errors in DAC linearity due to the tolerance in the alignments of the various masks during the IC production process. As further fine-tuning of the DACs is not possible, Philips has adopted a grading process to pick out those which offer the best performance. When the finished doped and etched silicon wafer emerges from the semi-conductor plant, it carries many dozens of individual DACs. A computer-controlled tester, consisting of 28 needle probes, then connects to the appropiate pads on each raw DAC die, providing power and supplying serial data from a CD player. If a DAC fails to work in this go/no-go test, the result being no analog music output, it is marked with a paint spot. Automatic machinery then slices the wafer into the individual dies and mounts those that passed the initial test in the familiar 28-pin DIL plastic package.

At this stage, the finished TDA1541 ICs are graded by a computer-controlled test station into three classes:

TDA1541A - no suffix
The standard grade is guaranteed to have a DLE of less than 1 LSB from bit 1 to 16; this is used in Philips's own reasonably priced players.

TDA1541A - R1
R1 (R for "relaxed) is guaranteed only to have a differential linearity error (DLE) of less than 2 LSBs from bit 1 to bit 16. This grade will be used in inexpensive players and supplied to some third-party manufacturers.

TDA1541A - S1
A small proportion of DACs meet a more stringent performance standard, having a DLE of less than 0.5 LSB for bits 1-7, less than 1 LSB for bits 8-15, and less then 0.75 LSB for bit 16; these are termed the "S" grade and are stamped with a small crown. This top perfoming chip will be used in Philips's best CD players.